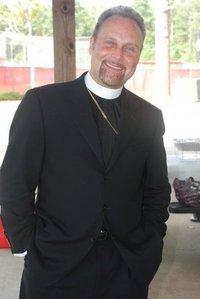 This week, a wonderful story/video is in the process of going viral.  Bishop Jim Swilley, Church in the Now, Conyers, Georgia came out to his congregation of over 1,200 people.  After 39 years in ministry (25 of them at his current church), a twenty one year marriage (his second) and four children, Bishop Jim chose to tell his congregation the truth about his sexual orientation. He is and always has been gay.

I had the opportunity to interview Jim with Jeff Blevins on AffirmingChristian.org for our weekly radio show.  Here is the short version of a  fifty-two year story.  Jim Swilley is a fourth general Pentecostal preacher. He knew at an early age, thirteen,  that he was called by God to be a preacher and, he also knew he was “different”.  He had no vocabulary as a child to describe the feelings; he was gay.  Prayers, begging God to change him, casting out of demons followed—the usual route for young GLBT Christians.  Nothing changed the orientation or the calling.

Bishop Jim married Debye 21 years ago. She knew of his orientation, they were in love, agreed to “handle it” and they became husband and wife.  Two more children were added to his two from a prior marriage.  You may ask “how can that be?”  How does a gay man father children with a woman? I will give you the answer many gay men in mixed orientation marriages have given to me, “a whole lot of fantasizing.”  This scenario is more frequent than you could imagine. You can love someone deeply,  it does not however, change the orientation and natural attractions.  Much of their married life was spent in celibacy.

Two years ago, Debye told Jim that they were not living up to the “Real people experiencing the real God in a real world” motto of Church in the Now.  Debye encouraged Jim that they be as open and honest in their own lives as they encouraged others to be. Jim feared this decision and knew this would eventually “out” him.  The first step was divorce, about eight months ago.  It was clear to those around them and in the ministry that both remained devoted and loving friends, exceptional co-workers and co-parents. So the questions, whispers and rumors swirled, “why divorce?”.  Last week, it was time to be real in the real world and hope the real God would sustain them.  He  has and He will.

“A Real Message to Real People” to the Church in the Now congregation is long (about 1 hour 20 minutes) and it is riveting.  No matter where you are on this issue, it is worth the time invested.  If you are GLBT, it is encouraging. If you are a straight Christian and already mumbling “heretic”, it may well bring you some enlightenment.  I can empathize with the entire spectrum of reactions.  Really.

I come as close as is possible to straddling the two communities: the straight and gay/bi/trans community.  So close that, in fact, I regularly have my orientation, motives, spirituality and integrity questioned. In 2000, I had one gay friend, one.  Today, I know about 800 to 1000 GLBT people.  So, I have creds when discussing this issue.  I hear the voices, the concerns and the stories of the gay/trans community and can understand as best as a straight person possibly can.  Five years of advocacy affords a level of expertise that deserves, at minimum, listening to what I need to say to the straight community and in particular, to the Christian church, of which I have been a part for over twenty five years.  My feet are firmly planted, my heart is directly pointed at God and my voice cannot be silent.  Please, please listen to me, especially those that have little to no personal relationships with the GLBT community.

Forty-seven percent of Americans still believe that being GLBT is a choice.  If you ask the approximately 7% of Americans that are GLBT, they will tell you they knew somewhere between five and eight that they were different. Before any child ever has a sexual thought, they sensed they were different.  By puberty, most know they are having same sex attractions and by their late teens, they are somewhere in the coping process.  Come out? Hide? Try to change to be heterosexual? Stay unnoticed on the fringes?  Or maybe, suicide even?

If you are part of that 47% that believe sexual orientation is a choice, you cannot possibly be in intimate relationship with any GLBT people. Intimate, meaning an honest and trusting exchange between the two parties.  If you are in such a relationship, you cannot possibly still believe being GLBT is a choice.  Just not possible. “Oh, I have a gay co-worker, neighbor, brother.”  If you would ask questions and listen rather than avoid and assume, you would know the truths I know.  My blog is filled with writings that may be a starting point for folks with no close associations with GLBT people. Words cannot be substituted for personal interactions but, they may cause you to doubt  your current opinions if they indeed  have no basis in personal experiences.

The issue of  “born gay v. it is a choice” is the singular  most reliable predictor of how someone feels about equality.  If you have no personal experience with this issue and still hold a negative/”it is a choice” opinion, might not that be a bit foolish?  Only twenty-two percent of people who believe being gay is a choice are for equality, whereas overall, 52% of Americans believe in equality. Seventy percent of those who believe people are born GLBT are for equality.

I wish I could scream this into the ears of the folks that think being gay/trans is a choice: “You are wrong, wrong, wrong!” Children choosing to be GLBT before they even think sexual thoughts? Come on, is that a rational concept?  People choosing to be gay or trans knowing they will be mistreated, marginalized and possibly be denied marriage and families?  Would you ever make that choice?

When did you heterosexuals know you were straight? I knew it when I saw Paul McCartney on the Ed Sullivan Show in 4th grade and it was fully confirmed when I saw David Thompson in freshman Algebra.  I did not have to have heterosexual sex to know I was straight.   We must, must remove this “sex act thing” from the discussion;  sexual orientation is about attraction.  This is from my own  extensive observations:  those that struggle most with gay issue, cannot get beyond the picture of  two men having sex when they think of  “gay”.  When you think of two heterosexuals dating, is your first thought one of a bedroom scene?

A friend of mine who struggled with the GLBT equality issue for years recently understood the bottom line was equality and not sex. The tipping point finally came when he hung around with me and did relationship with some of my GLBT Christian friends.  He admitted, “Kathy, when I thought of two men getting married, I thought of them having sex and kissing and it bothered me. But, when I thought of a man and a woman getting married, my mind did not go to the bedroom scene. I think of love and family and a life of sharing all that will come their way. I think of the families joined and the wonderful stuff ahead for them.” He was guilty of packaging the same sex attraction into the “it is about sex” box.  Common thought process for those who have few or little connections with the GLBT community;  they do not envision gay/trans folks  as  whole people.

If you are one of those that just cannot get beyond the simple truth that people are born with an orientation somewhere on the scale of fully heterosexual to fully homosexual, you are the one that needs to do the  processing work. Please stop asking other people to change to fit into your binary system of boy/girl, pink/blue, straight men/straight women.  It is not reality.  If you only know people like you, it sure may appear that you have the sexual continuum  dialed in.  I want to be a voice shaking your non-experiential paradigm.  I am one who straddles these communities.  I was where you are.  When you have one gay friend that you know tangentially, your opinion does not count as truth, sorry, it just does not.   In 2000, I had opinions based on hearsay, “truths” based in rhetoric and biases formed by propaganda.  Now, I have experiences far beyond what simple words here could convey.  Have I compromised my Christian beliefs to become an advocate?  No; read my blogposts: “Scriptures and Homosexuality”.

Church in the Now

I am convinced that the singular most important concept contributing to a person’s perception of the GLBT community and the issue of equality can be  reduced to one belief:  are people born gay or is ita choice?  Christians will default to the “homosexuality is a sin” stance. And, I would challenge that. So, is mistreatment of others, prejudice and not esteeming another as highly as you do yourself part of the Jesus-agenda?  If you are stuck on the sin-aspect, concentrate on your own sin as an antidote to unsticking you; that should be time-consuming enough. Yelling “sin” at a GLBT person does not make them ex-gay, it makes them ex-Christian.  So much for the Great Commission of “making disciples”.  Again, if you cannot get beyond this point, consider reading another point of view on the five verses (of over 31,000 total verses) in the Bible on my blog “Scriptures and Homosexuality”.

The superior way to come to an informed, knowledgeable, valid opinion is through relationship.  If you do this in earnest, there is no possible way to continue in the “gay is a choice” belief.  This singular commitment to knowing another person, will usher in the truth.

For my GLBT friends, please patiently endure us straight people that think we know who you are without any interaction with you.  We will say stupid things, assume wrong beliefs and treat you as less than equal . . . for awhile.  It was one person that God used in my life to smash open my well-formed prison of opinions. God used an agnostic lesbian to unshackle me and start to teach me grace towards others, all others.  Today, she is a beautiful Christian lesbian woman and am a less ugly Christian straight woman.

Misconceptions can be cured in relationship.  Men of God like Bishop Jim Swilley are born gay.  He is now free to be who God created him to be.  He can feel that freedom and openness already.  Listen to his testimony.  If you really believe that people make a choice for sexual orientation, you are making a choice to not hear what GLBT people are saying about their own lives.  Can you see the folly in that?

We have been here before as a society, as a church.  Treating others with respect involves relationship and listening. Open your ears and hearts to Bishop Swilley’s story; listen to GLBT people you may know.  They have a message for you, one that has for too long been silent.  Be brave enough to listen and more importantly, hear.

Holy Spirit wisdom to you.

PARENTS RESOURCES
I’m a Zero , A Look at Sexual Orientation