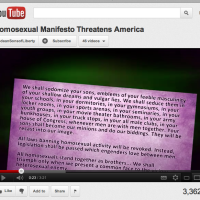 Bradlee Dean, of You Can Run But You Cannot Hide Inc. (YCRBYCHI), based in Annandale, 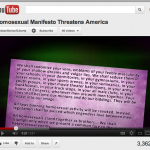 MN, calls himself a “moral, spiritual and patriotic leader” with a mission to reshape America by “redirecting the current and future generations both morally and spiritually through education, media and Judeo-Christian values found in the Constitution.” He presents himself as one who exposes the “lies, slants, manipulations and fabrications” of the “state run socialist media”. I would label Bradlee Dean a Christian extremist who is himself guilty of deception.

We have the right to express ourselves freely under the First Amendment. However, when the freedom of speech as an American intersects with the obligation to truth-tell as a Christian, the latter should prevail. Biblical “truth” is subject to interpretations, experiences, teachings and biases. We all apply lenses to the words in the Bible; the over 33 thousand Christian denominations attest to that. 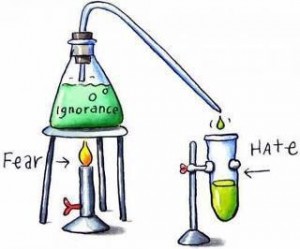 Of great controversy within the Christian church is the interpretation of five sections of Scripture referencing same sex behaviors. Although I do not agree with Dean’s interpretations of these verses, it is not his Bible views on homosexuality that landed him a not-so-coveted spot on the Southern Poverty Law Center’s Hate Groups list.  Those designated as Hate Groups actively:

As a straight Christian who works for inclusion in the church for gay, lesbian, bisexual and transgender GLBT Christians, I can easily discern the distinct line between Biblically held views and man-made prejudices. I regularly examine the documents many of the conservative family groups use as “fact” and “proof”. I have found the distortion of information by these organizations is rampant.  Every one of the 25 anti-gay religious family groups/churches/lobbyists on the Hate Groups list is guilty of actively propagating anti-gay falsehoods. 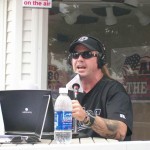 Dean accuses many others of “lies, slants, manipulations and fabrications”, yet he is guilty ofthis when the issue is the gay, lesbian, bisexual and transgender GLBT community. If I enumerated Dean’s litany of lies, it would create a damning document. I want to focus, however, on just one incident where I had personal interaction with Dean.  He says the word “truth” quite often and even quotes favorite from Einstein:

“Whoever is careless with the truth in small matters cannot be trusted with important matters.”

“This is the ‘Gay Manifesto’ published by Michael Swift first published in Gay Community News, February 15th to the 21st in 1987. It is also printed in the Congressional Record. This is what it states . . . ”

. . . and he continues by reading the complete piece by Swift, presenting it as a stealth gay agenda, threatening not only children, but the country.

Sadly, the version of the “Gay Manifesto” read by Dean, the version in the archives of the Congressional Record and every rendering of it found in the literature and videos of the religious and political right, omit the key sentence clearly defining “The Gay Manifesto” as satire:

“This essay is an outré, madness, a tragic, cruel fantasy, an eruption of inner rage on how the oppressed desperately dream of being the oppressor.”

The “Gay Manifesto” is sarcasm, written by one man as satirical prose, yet it has been sourced by conservative groups for decades as one of the prime roots of the menacing “gay agenda”.

In “Homosexual Manifesto Threatens America”, Dean does a masterful job of carefully selecting pictures to create fear of the GLBT community. Scott Lively, of the “Kill the Gays Bill” in Uganda who has recently been causing havoc in Eastern Europe, has been presenting the same version of  “The Gay Manifesto” in several countries as the outline for the plan for the homosexual world takeover (p 202). I am not kidding. Surely no one would try to pass this sarcasm off as “truth” in the US.

I became aware of this video when Mr. Dean posted it on his Facebook wall. (I followed him until he blocked me.) I challenged Dean directly and reminded him of what any person after a two minutes Google search knows: “The Gay Manifesto” used in his video was satire. He responded:

“If I wrote a satire like this I would be thrown in jail. Are you blind? Kathy, what does God say about this?”

First, no, Dean would not be thrown in jail; being a Constitution fan, he surely knows his right to free speech is protected.

For a Christian, however, the consequences of false free speech are deeper. It is contrary to the faith that any follower of Jesus Christ would participate in lying and the distribution of untruthful propaganda against a minority group of people with the intention to deny them rights, discrimination against them and strip them of their humanity and dignity. Dean and others casually blur the line between Biblical interpretation and outright demonization.

Dean, the exposer of the “lies” of others, the man who will “redirect” America to a more moral position, does not apply the morality of truth to himself. Yes, “Whoever is careless with the truth in small matters cannot be trusted with important matters.” Dean is routinely careless in the truth of big and small matters about the GLBT community. He dangerously blends his interpretation of the Bible with known falsehoods and presents the package as “love”.

His lies encourage discrimination, cause division and bring shame to the Christian faith.

Experience tells me, people like Bradlee Dean will not stop doing what they are doing. It is likely that he will continue spreading his  disinformation about the GLBT community, while hypocritically calling others to accuracy. So what can you do? Certainly, steer clear of Bradlee Dean and You Can Run But You Cannot Hide. 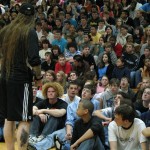 Do not let him speak in your schools. He has presented a program for abstinence and drug abuse to 330 public school assemblies in 21 states at the cost of $1200 to $5000 per performance of tax money. (He has also done it for free.) He has been confronted recently, finally, on his bait and switch routine of, once in an assembly, including his rants about homosexuality. Much of his “truth” comes from the ever-crazy Paul Cameron.

At least 25 Christian based groups in the US are doing the same duct-taping of Biblical interpretations together with known falsehoods about the GLBT community.  Good Christian people sit passively and silently in the middle space. With fingers-in-the-ears ignorance, most of these good folks are unaware of the extremist voices that represent our faith to not only the GLBT community, but to those outside the faith watching us.

We have ceded our public voices to people who do not express what we know as the core tenets of the public expression of our faith: love, mercy, compassion, service and justice.

I was once so sure of my stance on homosexuality and the Bible. Then I became friends with a lesbian named Netto; she became my regular hiking partner. My prejudices were directly confronted by real people who loved, and lived just as I did. It took several years to untangle man-made lies from Bible truths. In my ignorance, passivity and silence, I participated in the harm done to the GLBT community. 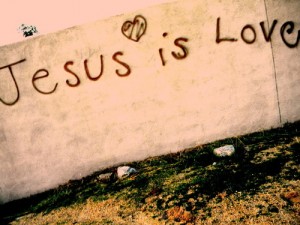 community. Get into relationship with some gay folks. Visit an affirming congregation. Investigate another point of view by watching Matthew Vine’s fine one hour video presentation “The Gay Debate”. Take some action to find your Jesus-reflecting place in this dialogue.

I know the damage silence has inflicted on God’s gay, lesbian, bisexual and transgender children. I also know the deeper destruction of hateful discrimination and injustice meted out in His Name. We can each start reclaiming our faith by calling upon fellow Christians to STOP the blatant use of lies and falsehoods against others. Until we do, the beauty of Jesus will be hidden by the ugliness of hate.