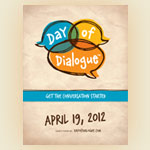 By Kathy Baldock on April 5, 2012 in All Posts, LGBT Youth, The Not-So-Kind
Tweet

I have a hair-trigger sensitivity for the protection of gay, lesbian, bisexual and transgender (glbt) youth.  Even if an action is wrapped in heart-themed paper and tied with a Jesus-loves-you ribbon, when there is something rotten inside, I can smell it. There is something very rotten at the core of the Day of Dialogue event sponsored by the conservative Christian ministry Focus on the Family.

I raised my family on Biblical principles I learned from Dr. James Dobson at Focus; we rarely missed the radio-drama “Adventures in Oddessy.” I was a regular listener and donor.  And now, I do not trust Focus on the Family.  There, I said it.  I do not trust them. Their Day of Dialogue event is thinly disguised sacred discrimination of gay and transgender youth.

Day of Dialogue, scheduled for April 19, 2012, “encourage(s) student-initiated conversations about the fact that God cares about our lives, our relationships and our sexuality.”  I think it would be more honest to call it the “Seventh Annual Tell the Gay Kids They Need to Change for God to Love Them Day.”

Focus on the Family has a miserable record in successful and productive engagement with the glbt community.  They actively warn against the inclusion of protection for gender identity and sexual orientation for children.  In “Parents Beware” , published in CitizenLink (an affiliate of Focus on the Family), Day of Dialogue coordinator Candace Cushman warns of “red flags to watch for” in schools, such as;

Currently, under federal law, religion, sex, country of origin, race and disabilities are protected classes; sexual orientation and gender identity are not.  The Safe Schools Information Act, Student Non-Discrimination Act and Elementary and Secondary Education Act renewal, which all include gender identity and sexual orientation designations, are scheduled to be voted on in the next Congress. Focus on the Family advises followers to not support their inclusion in these legislations.

In the “Guiding Principles” for Day of Dialogue, there is an anti-bullying statement, yet Focus  does not recognize the right for the
protection of children under the classifications of gender identity and sexual orientation. (Be sure to watch “Bully” when it comes to your city and then consider “Why wouldn’t every Christian ministry actively support the federal protection of gay and transgender children?”)

If this program were really focused on the message of God’s care and love for fellow students, why does it directly precede the Day of Silence? (Historically, it has been immediately following Day of Silence.)  Day of Silence, sponsored by the Gay, Lesbian Straight Education Network (GLSEN), began in 1996 to bring attention to anti-GLBT name calling, bullying and harassment in schools. Students and schools are encouraged to share the problem of anti-GLBT behaviors. Focus on the Family views the efforts of GLSEN as “promoting homosexuality to our kids.”  Day of Dialogue is unmistakably a reaction to Day of Silence; to promote it as anything less is to be quite disingenuous.

Looking at the history of Day of Dialogue:

Day of Dialogue was instituted by a distinctly anti-gay group, transferred to a ministry that until recently promised orientation change, and is now overseen by Focus on the Family whose official stance is to not include federal protections of children for sexual orientation and gender identity.

Oh, and that’s not all . . . . Focus on the Family founded the Family Research Council (FRC) in 1983 as the political arm of Focus and, in 1992, FRC became its own entity and was immediately extremely active in anti-gay activities, producing the horribly biased, myth-filled video series “The Gay Agenda in America.”  FRC, also on the Southern Poverty Law Center’s Hate Groups list, is currently the most vocal conservative group with its tendrils in every same-sex marriage vote. Along with Focus, they actively oppose federal anti-discrimination bills that would protect children from harassment due to sexual orientation or gender identity.

Did you know rejected gay youth:

How could it be possibly be appropriate to use Christian children to further marginalize gay, lesbian, bisexual and transgender children?

On the Day of Dialogue website there are “fun suggestions” such as “invite someone who has experienced homosexuality and walked out of it to share their story. Exodus International is a good resource for finding possible speakers in your area.” (Cue up my screaming!)  Exodus themselves say there is no “walking out” of sexual orientation, yet there will always be an affiliate member of Exodus to say otherwise; there are no controls over affiliate members.  Sounds like a perfect day at school for a gay kid!

What should the Christian response be to Day of Silence?  Love and serve.  Every day. Many of these targeted gay kids are Christians and they have spent more hours than you can imagine attempting to reconcile the orientation they cannot choose with the faith they can.

Escalating the discrimination of gay and transgender youth further, several Christian ministries are calling for a Walkout on Day of Silence by Christian students on the Day of Silence.  Nine of the groups behind this action are on the Hate Groups lists and all actively work against the inclusion of sexual orientation and gender identity protections for students in federal bullying laws.

Most adult Christians I interact with are embarrassed by the anti-gay sentiments portrayed as typical Christian behavior.  They are tired of the ill-treatment of the gay community. Focus on the Family, along with many of the groups with which it associates, is guilty of anti-gay rhetoric.  This must stop.  Disagreement about Bible verses does not validate discrimination. Allowing Focus on the Family to export their historical and counter-productive sacred discrimination of the glbt community to our Christian youth is a mistake.  Day of Dialogue is a mistake.

I encourage parents to not allow their children to take part in Day of Dialogue; and to  go even further, if you are a follower of Jesus Christ, please let Focus on the Family know that gay, lesbian, bisexual and transgender children are valuable in the eyes of God and you will not stand for discrimination disguised as love.

P.S. Dear Candace Cushman, head coordinator of Day of Dialogue @Focus on the Family: How about a “Jesus Hearts You Day” the day before Valentines Day?  That might be more along the lines of the Gospel.