By Kathy Baldock on March 29, 2011 in All Posts, LGBT Youth, Parents, Reparative Therapy, The Not-So-Kind
Tweet

[OPEN LETTER to Alan Chambers, President of Exodus International and those that seek to force gay/trans Christian believers into any program that seeks to “fix” them.  The time is well past to dialogue and find solutions that focus on allowing people to come close to God without  our theological rules and interpretations. Please, let us focus on others and not our right to be right. ] 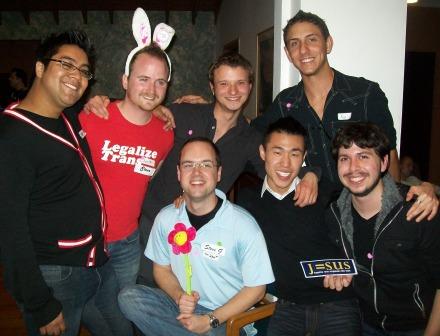 I spent quite a bit of time going through most of the pages on the Exodus International website and they are not straight forward (pun not intended) in the message.  I am trying to understand what it is that Exodus does, says and promises. It is not clearly stated, so I wanted to come and observe for myself at your June Freedom Conference, but you uninvited me.

I’ve attached a few pictures from a potluck in Los Angeles this past weekend. Look at the faces of these young gay men, Alan. They are Christian gay men. By your assessment however, they cannot be gay and Christian if they are  not seeking in any way to change their orientation.

I have met over a thousand gay, lesbian, bisexual and transgender Christians. They have been on varying  journeys in their faith

walks. Some have left the faith completely because of pressures to be straight so that they might please God. I think even Exodus can agree that you cannot make anyone straight. Bisexual people can stick with the opposite sex; homosexual people can get married and live as straight people and that does not make them heterosexual; and people can choose to remain celibate. None of these situations means that the person has changed orientation.

We are at a critical point in the Christian church on the issue of acceptance of gay/trans believers. Alan, you and I both know there are gay/trans believers. This is a truth. We can play all the semantics games possible about identity and new identity and new creation. But, we both know there are gay/trans people in relationships that express love sexually and, they are Christians. If  our theology does not allow for this and we know it to be true, then the only logical conclusion is: there is something wrong with our interpretation of verses. The people are real; the interpretations are man made.

We are allowing this issue to divide the church.  Can you imagine anything more un-Christ-like than people dictating who can come near Jesus?  Look at these young men Alan.  Look at those faces, those smiles. Do you really see broken, addicted people who need to stop being gay to please God?

I cannot wholly slam Exodus; I know many people who have actually found benefit to their lives from being in Exodus for a time. For some people, it was the first time they knew there were other gay Christians. For others, they got some healing from familial dysfunction (which most of us could benefit from). Although it is very difficult to understand what Exodus actually does, I understand it is essentially a referral agency to other groups that are somewhere on the spectrum of “reparative therapy”. Most of the resources point to “repair”.  You told me yourself Alan that Exodus is not in the reparative therapy business, but the resources and FAQ scream it.

I wanted to come to the Conference and meet people for myself that have benefited from and still fully engage in the Exodus experience/way. I know there must be some.  People who are married, people with children, people serving in ministries. People who are happy that they are not gay identified, or openly gay or same-sex attracted.  My experience is skewed the other way.  I hear the horror stories of  ex- attendees who invested decades and tens of thousands of dollars, the stories of ex-leaders, of ex-counselors, ex-ex gays, ex-ex lesbians, gays that are so condemned by sexual feelings that they live lonely lives.  I need to hear the success stories for myself.  I have been to several conferences for The Gay Christian Network and the Evangelical Network where “Exodus sorts” have been openly welcome to all events.  I wanted the reverse experience so that the threads of my impressions are more accurate.

I think  ultimately, Alan, we both want the same thing. We both want people to enjoy an intimate relationship with God if that is what they want.  And you know what, Alan? Gay people are not the one class of people excluded from that intimacy experience. We need to stop this church wide, specifically targeted pressure to change the orientation of gay people. It never was man’s job to do that.  It has been our job to reflect and point. We are a really bad reflection to the GLBT community and we point to the curb or Exodus. There are other options.  Like reconciled churches, ministries and The Gay Christian Network.

Until gay, lesbian, bisexual and transgender people find an equal place in the church, Exodus will exist. But, as they make themselves known and as the rest of the church get in relationship with them,  all the gifts and qualities of homosexual believers will be seen as equal and as valuable as those of heterosexual believers.  It will challenge our man-inspired take on the God-inspired Word.  This is happening. It started happening  to me ten years ago.

If people want to take the Exodus route to reconciliation of their sexuality and faith, so be it. But, never discount or demean the other routes gay/trans people find to God. Those routes may have  nothing to do with sexual orientation; they have  everything to do with heart orientation.

Look at these young men again Alan. All of them have been told in varying degrees that they are unacceptable to Him because they are gay. All have been told they need to change their orientation to please Him. Most have hidden their orientation at some point in their lives because being honest meant rejection. All have somehow stepped over the crap the church has placed in the path and still,  they found a way to God.  All are gay. All identify as gay.

Please Alan and Exodus, be part of the solution. Stop telling my friends they are broken and unacceptable. Neither is true. I don’t know how you will stay relevant in a church that is learning to embrace those we never should have rejected.  That is for your board to figure out. I just know the heart of the God I serve is not exclusionary, does not oppress, does not reject and is all for equality.  If you really, really believe all sin is equal, then give God the chance to work on the “sin of homosexuality”, that is,  if He wants to. I have not seen one example of  God changing any person’s orientation to date. Not one.  I was hoping to meet people with other views at the Freedom Conference.  Some of those success stories, some of those who are now identify as straight.

I  know I see Jesus in the lives of my self-identified, not-repenting-for-it, reconciled-to-it, accepting-of-it and sexually-expressing-it gay and trans friends. And that should challenge the rest of us to consider that this God that we say is so huge and not-of-our-ways is, once again, is not defined by our beliefs. This will probably be a non issue in about twenty years, even in most churches, and we’ll wonder why we were so resistant.  Problem is, those that have fallen and are falling by the wayside now are of great value to Him and  they should be to us. Important enough to be changing the divisive/exclusionary dialogue in our various denominations to figure this out.

Of this I am sure:  John, Stuart, Juan, Paul, Wesley, Travis and Josh are loved by God just as they are.  No need to not be gay or not be same sex attracted. I have hundreds of pictures of  gay, lesbian, bisexual and transgender Christians. I have thousands of stories. You can  have seven verses of Scripture. Seven verses that I believe are mistranslated and taken out of context. Better off to stick with the ones we know are accurate. Concentrate  on them and let’s stop excluding an entire class of people from our churches and lives.

And if you want to introduce me to some  of those Exodus success stories, I am still open to it. I very much want to challenge my own beliefs so that the church, as a whole, might actually look like this irresistible Jesus. I’ve kept that week in June free.

So glad He saved my sorry self,

Also refer to the stories being compiled on the REPARATIVE THERAPY page.

If you are a Christian parent of glbt youth, please consider reading this helpful post “Dear Moms and Dads | A Letter to Christian Parents of glbt Youth”

OTHER RELATED POSTS:
Scripture and Homosexuality: A Look at the Verses
“Day of Dialogue” from Focus on the Family is Not a Jesus-Action
“Ten Lies about the glbt Community Told by Conservative hate Groups | A Straight Christian Perspective”
Statistics That Lie | “The Dutch Gay Marriage Study”
Focus on the Family: You Make Us Look Stupid, Stop Lying
“Medical Consequences of What Homosexuals Do”, Come on, Really?
Three Things My GLBT Christian Friends Want You to Hear

Dear Moms and Dads, | A Letter to Christian Parents of glbt Youth

To Be Seen AND Loved: Dancing at a Gay Bar

I’m a Zero , A Look at Sexual Orientation

Will You Stand Beside Them? The Crisis with GLBT You