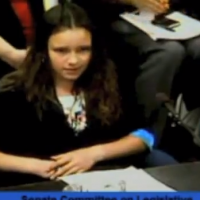 By Kathy Baldock on March 27, 2013 in All Posts, Marriage, Policy/Culture
Tweet

I participated in the third annual Nevada State Legislature Equality Days in Carson City. Four issues of concern were the focus: marriage equality, deletion of “infamous crimes against nature” and the disparity of legal age of consent for same sex couples, the religious freedom act and comprehensive sex education in Nevada.

Nevada currently recognizes Domestic Partnerships for same-sex couples and voted a decade ago to include the definition of marriage in the State constitution as only between one man and a woman. To change an amendment in the state of Nevada, there must be two rounds of popular vote. Because the Nevada State Legislature only meets every other year for a regular session of 120 days, the soonest the law can change to permit marriage equality in Nevada is 2016.

The star-testifier of the session was 11 year old, Dalia Zaki. She read a speech she had written and asked that her biological mother and father, each in long-term relationships, be able to marry their partners. Dalia and her brother are both in a gifted and talented program and have:  two Moms, two Dads, two cats and two dogs. At the end of her 4 minute speech, Senator Mark Manuedo (D-LV) asked Dalia, “Do you know what it means when you are told — you knocked it out of the park?”

Nevada Revised Stature 201.195 contains language that still criminalizes homosexual behavior. The so-called “infamous crimes against nature” establishes a discriminatory age of consent between two heterosexual and  two homosexual partners. Heterosexual sexual activity is permitted between consenting partners at the age of 16; the age minimum for consenting homosexual partners is 18. The law needs to be struck along with all references in the NRS referring to same-sex sexual activity as “infamous laws against nature”. 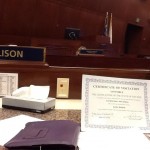 Sitting on the floor of the NV Assembly

AB 230 proposes legislation that would require that all school districts offer a comprehensive, age-appropriate and medically accurate sexuality education curriculum that includes: Reproductive and sexual anatomy and physiology, accurate information about HIV/AIDS and STD prevention and transmission with an emphasis that abstinence is the most effective way to prevent pregnancy and STDs, healthy life and interpersonal skills to make responsible sexual choices, inclusion of race, gender, gender identity, religion, sexual orientation, and cultural backgrounds, awareness of domestic violence and sexual abuse, awareness of internet exploitation.

SB 192 would allow religion to be used to discriminate and harm others.

While visiting the legislature, I was able to testify for the passage of SB 139 which introduces the language of gender identity and gender expression into the Hate Crimes laws of Nevada. The bill was brought to the Nevada Senate floor by Senator Pat Spearman, the first out lesbian legislator in the State of Nevada, 29 years in the Army, MDiv. graduate of Episcopal Seminary of the SW in Austin, founding pastor of a church in Las Vegas.

Three Ways Marriage Equality “Harms” Marriage, So They Say
Day of Dialogue | Sacred Bullying from Focus on the Family