The story of Sodom and Gomorrah in Genesis 18-19 is a simple one. God was ready to destroy the cities 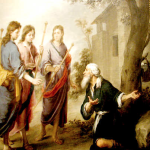 and inhabitants of Sodom and Gomorrah because of their wickedness. God (called “the Lord” in this story) came, along with two angels in the form of men, to visit the home of Abraham, who lived far outside the cities. As the two men travelled on toward Sodom, the Lord engaged in negotiations with Abraham as to how many righteous inhabitants must be found there in order to save the city from destruction. Aware that his nephew, Lot, lived with his family in Sodom, Abraham bargained the number down to ten: He and the Lord agreed that if ten righteous people could be found, Sodom would be spared.

As the two men entered the gates of Sodom, Lot, knowing of the possible dangers awaiting visitors who stayed in the town square overnight, invited them into the protection of his home. Late into the evening, the Bible says, all the men of Sodom surrounded Lot’s house and demanded that he send the two guests out so the men of the city might have sex with them. The sex the men were demanding was not based on loving desire; rather, it was a form of gang rape intended to humiliate the guests.

In lieu of raping the visitors, Lot urged the crowd to take his two daughters. It’s almost inconceivable to imagine a father doing such a thing. As is true with many passages of Scripture, this one needs to be understood within its own time and culture. In ancient cultures, women suffered low status. The rape of a woman, even one’s own daughter, didn’t compare to the humiliation suffered by a man if he were raped. Not satisfied with the offer of abusing the daughters, the men of Sodom persisted and demanded that the visitors come out of the house. Instead, the angels blinded the inhabitants of Sodom and quickly escaped with Lot, his wife, and his two daughters.

Though the Genesis 18-19 account never mentions what the sin was that was “so grievous” (18:20) as to lead to the destruction of Sodom, Ezekiel 16:49-50 does list sins of Sodom: arrogance, an uncaring attitude toward the poor and needy despite their own riches, and other “detestable things.” In the eighteen Old Testament mentions of Sodom and Gommorah after Genesis 19, same-sex behavior is never cited as the sin that caused the destruction of the city.

In the New Testament, Jesus mentions Sodom. As He sends His disciples out to preach, He alludes to the 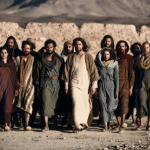 possible consequences that will be suffered by inhabitants of cities to which the disciples are going if they mistreat the visitors. Jesus warns in Matthew 10:14-15 (NIV): “If anyone will not welcome you or listen to your words, shake the dust off your feet when you leave that home or town. I tell you the truth, it will be more bearable for Sodom and Gomorrah on the day of judgment than for that town.” Sodom is again mentioned in Luke 10:12 and in 2 Peter 2:6; no male-male sexual behavior is mentioned.

Sexual immorality is mentioned in Jude 1:7. The verse says that the people of Sodom had “given themselves over to sexual immorality and gone after strange flesh” (NIV). But the Greek words here, sarkos heteras or “other flesh,” are thought by some commentators to indicate the flesh of angels, as the men of Sodom had tried to rape the angels.[1] 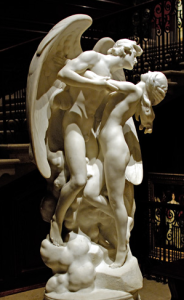 [A]s men . . . pursuing a great deal of intemperate indulgence of gluttony, and drinking, and unlawful connections; not only did they go mad after other women, and defile the marriage beds of others, but also those who were men lusted after one another, doing unseemly things, and not regarding or respecting their common nature . . . the men became accustomed to being treated like women, and in this way engendered among themselves the disease of females, and intolerable evil; for they not only, as to effeminacy and delicacy, became like women in their person, but they also made their souls most ignoble, corrupting in this way the whole race of man, as far as dependent on them.[2]

Philo’s account is quite different from biblical texts referencing Sodom. Philo describes an overall orgy-like atmosphere of gluttony, drunkenness, and sexual excesses. The men of Sodom, driven by their lusts, had sex not only with their own wives, but with other men and their wives. Some men, Philo wrote, were “treated like women” (i.e., the penetrated, passive sex partner). As a consequence, according to the author, even their souls became like those of women—diseased, evil, and ignoble.

Two other notable writers, the early Christians Tertullian, in the second century, and St. Jerome, in the fourth century, did not link the sin of Sodom to same-sex behavior. St. Jerome, in fact, specifically echoed the prophet Ezekiel and identified arrogance and excesses of food and drink as the sins of Sodom.

Though no biblical texts explicitly connect same-sex behavior to the sin of Sodom, it was Augustine, a

fifth-century theologian, who fixed the popular connection between the sin of Sodom and same-sex behavior. In referring to the men of Sodom, he decried those who took the passive role, writing that they were “corrupt and pervert their own nature by becoming inflamed with passion to make unnatural use of the thing which You [God] do not allow.”[3]  Augustine also introduced to the church the imperative that sex, in order for it to be moral, had to be procreative. And that, is another issue covered in the post on Romans.