Just finished this book, written in 1844. 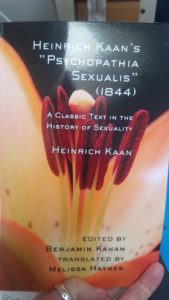 The author wrote in Latin because it was “too dangerous to hand over to the general public.”

I know the study of new topics needs to start somewhere, and this is the place sexology started. SO WEIRD.

Assertions: People of color hit puberty sooner and were thus more lustful and given to perversions, women were always lustful, Ethiopians and Mongoloids were more lustful and prone to perversion more than Caucasians, lustful parents produce lustful kids, heat-producing foods stimulate the body too much, neglect of exercise, too much of it, or the wrong kinds produce perversions, so do the overuse of coffee or chocolate, and . . . the reading of poetry, stories and watching comedies.

And for the love of all that is pure—DO NOT hand your children over to nannies or caretakers that are Gallic or French so that they may be “abandon their children to the custody of these sorts of people.” And “by no means” should your children be handed over to the care of medical students!

The book opens with 27 pages discussing plant sex, then animal sex. THOSE two were the gateway discussions to studying and discussing human sex.

Even botany books of the day (plant sex) were banned reading by women–too sexual and stimulating. REALLY. Botany.

In one hundred years, people like me will be reading the INSANE books written on human sexuality by people like those on this list ( http://bit.ly/CWCBookReviews ), and wonder “HOW were people ever this ignorant?!”

This really is amongst the weirdest of the books I have ever read. It is definitely a book of its time, however.

As many of you know, I am working on the next book. (Working title: “A Sacred Weapon” taken from the letter Pastor David wrote to the RSV translation team in 1959 stating that 1 Cor. 6:9-10 would be used as a “sacred weapon” if the team did not consider correcting the mistake.)

In the upcoming book, I begin with the history of writings and thought about sexual perversions. Sexual perversion was ANY sexual act that was not procreative. (I am pretty darn SURE heterosexuals can do that!) Though there was no category of hetero- or homosexual yet, and would not be somewhat culturally understood for another 80 years, the first person to write about sexual perversions in people was Heinrich Kaan.

He wrote “Psychopathia Sexualis” in 1844 in Latin. (The same title would be used for a series of books at the end of the century by von Krafft-Ebing).

Because Kaan’s book was written in Latin and only translated into German and not into English until two years ago, his work was largely unknown.

Don’t you want to read the next book??? Tell the truth, dispel the myths, and expose the manipulation.

Stay up to day with monthly emails: newsletter@canyonwalkerconnections.com