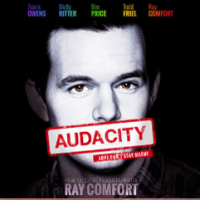 By Kathy Baldock on August 21, 2015 in All Posts, Book Reviews, The Not-So-Kind
Tweet

Ray Comfort’s Audacity released this week for free on YouTube. Comfort created the hour-long film as a tool to create “peace between the church and the LGBT community” to let gays know that “Christians don’t hate homosexuals. We love them. We care about them in this life and the next.”

Patheos blogger Camille Berdjick presents an accurate (and quite amusing) run down of Audacity’s storyline which is worth the read and saves me time recounting the awkward plot.

Footage from Comfort’s vaultful of Living Water’s street evangelism recordings is interspersed throughout Audacity’s protagonist Peter’s struggle to act with audacity (fearless daring and boldness) in telling the gay people around him what God “says” about homosexuality. 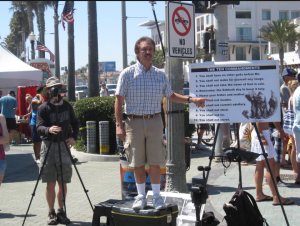 He uses questions that net “yes” or “no” responses while slowly and methodically reeling people into his predictable net where the final answer is of Comfort’s making.

Audacity’s gay characters are portrayed as shallow. The commitment to their partners is quickly undermined by Comfort-style simplistic evangelistic challenges. Surely, we are lead to believe, there is no emotional depth and covenantal relationship between same-sex couples. It’s all about sex. It’s always been about sex for gay couples, while the more honorable status of commitment is reserved for straight couples.

As strange as that may seem to many who have witnessed the companionship of their gay couple friends, this “it’s all about sex” concept has deep roots in the belief system of many conservative Christians. Heck, until I began hanging out with gay and lesbian couples, I believed it too. 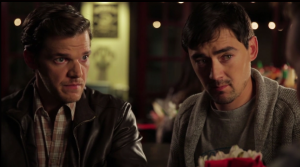 Comfort reinforces the myth in his surface portrayals of gay couples. The bar scene is flat-out weird. Does anyone really believe that a couple will spontaneously end their relationship when presented with Comfort-style witnessing and a Christian tract?

One of the partners in the bar scene asks Peter, “How come the word homosexuality hasn’t been in the Bible until a few decades ago?”

Peter responds, “So, it is true that the word homosexuality wasn’t in there because the word hadn’t been invented yet. It was coined somewhere around 1900. But the original Greek word that was in there, that is the exact equivalent to the modern word homosexuality.”

That was the line that blew all my brain fuses.

Okay, Peter/Ray, first which of the two Greek words often translated as homosexual is it that you are referring to? Malakoi or arsenokoitai(s)?

I have done an extensive blog post on these two words, but briefly, malakoi most often means having the

disposition and/or traits of a woman – for a man in the ancient world, nothing was worse than being treated like or thought of socially as a woman. Malakoi also means taking the sexual role of a woman as the one who is penetrated during sex.
Arsenokoitai is a tougher word to translate. It most likely refers to a man who has sex with a boy or younger male in situations of power differentials, and/or with the likely exchange of money.

Neither of these words ever referred to women in sexual acts with women. That alone should discount inclusion of lesbians from the “exact equivalent” of the Greek words.

Some Comfort-style Christians may think giving Audacity to a gay person is a loving, compassionate, or healing gesture.

In Audacity, homosexuality is viewed as a behavior, not an orientation. EVERY professional medical and mental health organization in the U.S. asserts that homosexuality is a normal variation of human sexuality, though certainly less prevalent than heterosexuality, still, it is a normal, expected variation. These professional organizations also all agree that attempting to change a person’s natural orientation is damaging.
Equating orientation to a “behavior,” as Comfort does, is to dishonor the dignity of another human being as they are created by God. Dishonoring people is not the first step to loving interactions; surely we can agree on that.

Comfort hopes we will embrace his uninformed illusions about orientation and overlook the social and medical histories of how we have come to understand the shifting roles of men and women since ancient times while also ignoring the progression of human sexuality over the past century.

Comfort seems convinced his simple and completely inaccurate statements spoken to shallow LGBT characters in a cheesy storyline is compelling enough to warrant handing the DVD out to “friends, family, neighborhood, outside your local high school, at your university – when you check out at a store or when you leave a generous tip at a restaurant.” Bought in quantity, you can destroy relationships and drive people from God for the low price of $1 per DVD.

By passing along the YouTube link or handing out Audacity, you can completely alienate every gay recipient you know along with allies who have had the audacity to do relationship with LGBT people and Christians and the boldness and daring to participate in ignorance-ending research.
If you hated God’s Not Dead for its bad acting, weak character portrayals of all folks who are not “sold-out” Christians, and trite attempts of evangelism, you will likely hate Audacity even more.

End of the Day podcast interview by Kevin O’Brien with Ray Comfort about Audacity.