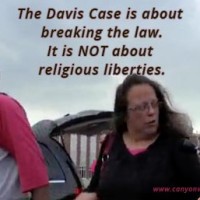 By Kathy Baldock on September 3, 2015 in All Posts, Policy/Culture, The Not-So-Kind
Tweet

Federal Judge David Bunning ordered County Clerk Kim Davis to be held in contempt of court for her refusal to issue marriage licenses to same-sex couples in Rowan County, Kentucky. Davis will be released from jail when she agrees to do the job she was elected to do when she took an oath to perform “without favor, affection or partiality.”

At the hearing this morning, Judge Bunning stated: “The court cannot condone the willful disobedience of its lawfully issued order. If you give people the opportunity to choose which orders they follow, that’s what potentially causes problems.”

Without doubt, there will be many people who endeavor to misrepresent the Davis affair as one of Christian persecution. Her attorneys from Liberty Counsel would like nothing better than to add another “martyr” to the rolls of the saintly bakers, photographers, and public chapel owners — all who broke laws pertaining to discrimination.

Similarly, Davis is not being held in contempt of court for her Christian beliefs.

Davis is not being held in contempt of court for her Christian beliefs.

Over the coming weeks, there will be pressure to frame conversation about Davis as one of religious persecution potentially signaling the onslaught of the faithful being carted off to jail.

Don’t fall into that verbal and contextual trap!

Davis is being held in contempt of court because she broke the law. 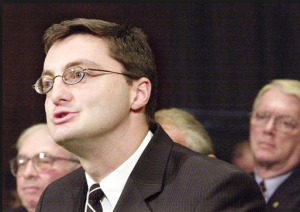 When the Supreme Court of the United States ruled on same-sex marriage in June, marriage equality became law in every state including those whose state constitutions had formerly banned it. Davis has decided to not abide by the rule of law.

The rule of law holds that laws govern a nation as opposed to subjective or discretionary decisions made by individual government officials. Davis subjectively decided to not perform the duties of her elected office. Whatever Davis’ reasons happen to be, and her reasons involve her expression of personal beliefs, she is breaking the law by not performing her job as an elected official.

Kim Davis, County Clerk, Rowan County, Kentucky is in jail because she defied a federal and two superior court orders. She refused to acknowledge the rule of law of a binding Supreme Court decision. She just happens to be a Christian.

4:30 pm EST — In the latest update from Federal Court, five deputy clerks in Rowan County told the judge they will issue marriage licenses. The only hold out was Davis’ son, Nathan Davis. Kim Davis told Judge Bunning she would rather remain in jail than co-operate with her deputies and issue marriage licenses. Bunning then told her then jail it is.