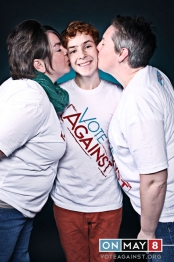 By Kathy Baldock on May 3, 2012 in All Posts, Marriage, Policy/Culture
Tweet

Christian voters in North Carolina will be the deciders for or against the inclusion of Amendment One in the Constitution of that state.  As a fellow Christian and heterosexual that has worked for inclusion of gay, lesbian, bisexual and transgender Christians in the church for several years, I offer a few fundamental yet largely overlooked insights.

As you decide whether or not to include the definition of marriage as one man and one woman in your state constitution, thoughtfully consider your responsibilities as both a citizen and a Christian:

1.  Marriage has already been designated as “one of the basic civil rights of man” by the Supreme Court of the US. In the 1967 Loving vs Virginia case that invalidated the miscegenation laws prohibiting black/white marriage, marriage was deemed to be a basic right for all people. The decision states, “The freedom to marry has long been recognized as one of the vital personal rights essential to the orderly pursuit of happiness by free men.”

Marriage as a fundamental right under the Equal Protection Clause of the 14th Amendment was reaffirmed in the 1978 Zablocki vs Redhail decision.  That decision states “ the right to marry as of fundamental importance for

Civil rights should not be subject to a popular vote; rights have been evaluated and extended by close examination of the Constitution.  The Constitution interprets for its citizens what is fair and just.  Clearly, marriage is a basic right within our Constitution. Inclusion of gay and lesbian people in the right to marry has been and is currently being examined by several states.

Undoubtedly, a case testing federal marriage equality will be heard at the Federal level in the Supreme Court within the decade. This is the logical progression of interpreting Constitutional law as it applies to the right to marry a same sex partner.

2.  Moral disapproval of a group does not constitute a legitimate reason for the government to

withhold rights from that group. Unless there is a “compelling State interest” to withhold rights, (such as has been found with polygamy and incestuous relationships)  rights must be extended under the Equal Protection Clause.

In 2003, Lawrence vs Texas overturned sodomy laws. The decision in this case stated that the government maynot single out a class of citizens for special disadvantage simply because other people disapprove of or dislike them.

Christian disapproval of same sex marriage on the basis of religious convictions would not likely constitute a compelling reason for the State to fence gay and lesbian people from the civil right to marry. The decision for or against marriage equality lay in the Constitution, not the Bible.

I am not suggesting you ignore your Bibles; I am inviting you to revisit (not revise, revisit) the Scriptures  used to investigate homosexuality and faith. The body of Christians willing to do so is growing; I changed my view completely when the issue became personal and I took the time to study the Word of God for myself on this topic.  I highly recommend spending one hour watching this excellent Biblical examination by young Matthew Vines.

3.  In the history of the US, racial and gender-based discrimination, although defended by Biblical and moral arguments, did not shielded those discriminations from the scrutiny of the Constitution.  Marriage is currently perceived as a civil right and our legal system is working through the legality of same sex marriage state by state. Rather than aggressively participating in the denial of the progression of rights and freedoms, Christians are to sympathize with those who have been oppressed by discrimination and work to alleviate that pressure.

and beliefs of others. Isaiah 58 instructs us to: “loose the chains of injustice, untie the cords of the yoke and set the oppressed free”.

4.  The last words of Jesus were “go and make disciples”. There is no way to soft-peddle a discriminatory vote for Amendment One into “love”. If you restrict the definition of marriage in the NC state constitution by popular vote, the clear message sent to the gay, lesbian, bisexual and transgender community is one of intentional disregard and discrimination.

Equality is bending towards the inclusion of same sex marriage. Gay, lesbian, bisexual and transgender people and those that love and support them have become increasingly less interested in Christianity. “Loving” is not the first trait people outside the faith assign to those of us inside the churches. Rather than inviting people to come view our Beautiful Savior, we are pushing them away with our deliberate exclusionary stances in not only the faith arena, but the civil rights arena as well. Disciple-making is a becoming a challenging task as fewer people view Christians as “loving”.

Christians will be deciding the fate of Amendment One in North Carolina.  Ideally, as Christians participate in the democratic process, they would be both fair-minded and educated in matters of civil rights and the law and in matters of justice and the Bible.  Our actions as Christians toward others are to be based in love; often we mistakingly think we dictate the terms of that love. Romans 13 says “Love your neighbor as yourself. Love does no harm to its neighbor.” A vote to restrict marriage is not loving your gay and lesbian neighbor, and it does do harm.

What the gay, lesbian, bisexual and transgender community is asking for is right and noble, and it is not in conflict 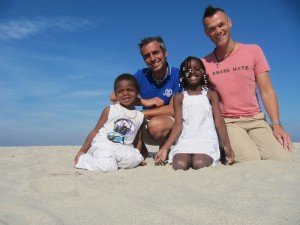 with the best interest of society. Gay and lesbian people are a class of people; sexual orientation is not a behavior. This matter has been settled by medical and psychological experts for some forty years. Constitutional law already says no group may restrict the rights of another group because they do not like their actions or beliefs.  Gay and lesbian people want to get married for the same reason heterosexuals marry: to express love and commitment, to be in intimate relationship, to obtain civil and legal protections and to have and raise their children within families.  The benefits of marriage are touted as worthy of preserving, yet those benefits are withheld from gay, lesbian, bisexual and transgender people. 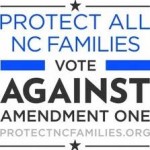 If Amendment One does pass in NC and the restrictions on marriage are added to the State Constitution, it will be overturned at some future point as the entire nation trends towards Constitutional equality. But, in the meantime, the citizens of NC and the Christians in particular, will have effectively sent a strong message to the gay, lesbian, bisexual and transgender community that they are not your equal, nor do they deserve the dignities of equal rights and protections.

The Constitution and the Bible are unified in the message of dignity and equality for all people. I urge Christians in North Carolina to vote against Amendment One.

View all posts by Kathy Baldock →
Scott Lively Brings the “Ugly Jesus” with Him | Next Stop: Oklahoma City
Pastor Sean Harris Continues the “Apology” on the Day of Prayer