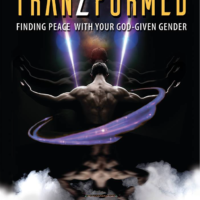 By Kathy Baldock on August 30, 2017 in Book Reviews
Tweet 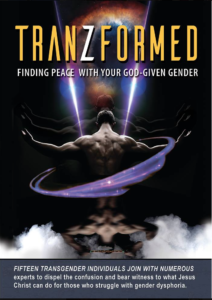 Foster (founder and director of Mastering Life Ministries and the producer of “Pure Passion” TV, and member of the advisory board for the Restored Hope Network (RHN)) is the story of “15 former transgenders (who) join experts (to) bear witness to what Jesus Christ can do for those who struggle with gender dysphoria.”

[Review also posted on Amazon so that you can vote it useful, or not]

Several years ago, I attended the inaugural RHN Conference. At the time, Foster was an RHN board member. Following the event, I wrote a four-part less-than-flattering commentary  about the organization. Since then, I have reviewed books suggested by RHN and have found all of them consistently filled with inaccurate stereotypes, single stories, the voice of “experts” who are not experts, partial truths, and unrestrained lies. Unsurprisingly, “TranZformed” holds to the same pattern of content.

“TranZformed” begins with an overview of Genesis. God made male and female, told them to procreate, and fill the earth. This segment is followed by a history (of sorts) of transgenderism. Foster blurs ancient concepts of “hermaphrodites,” or intersex people, into his telling of history. Intersex and transgenderism are two separate issues. The former concerns ambiguous biological sex, and the later, gender identity.

I am a respecter of a person’s story. We each have one to tell and others do not get to tell us our feelings or recollections are wrong. A few things are worth noting however about the people Foster chose to interview.

Every one of them had suffered either childhood and/or early life emotional and/or sexual abuse. Of the estimated 2,088,000 transgender people in the U.S., Foster interviewed fifteen who fit this narrative. Unfortunately for Foster, 15 out of more than two million people is not statistically significant, so his claim is not based on scientific fact and can simply be viewed as less-than-honest. I am quite sure I could find fifteen heterosexual people who did not successfully navigate marriage due to past abuse issue. Still, this should not become the basis for a movement to ban heterosexual marriage.

The shared stories of those interviewed are immensely sad and filled with shaming, sexual abuse, rape, loneliness, absent and distant parents, addictions to pornography, drugs and alcohol. Clearly, many of those in the group would have benefited greatly with the help of mental health professionals to deal with their mental illnesses and/or childhood abuses. The film’s sole suggested panacea however appears to be “live in your biological sex, become a Christian, and all will be well.” Life is not that simple.

Throughout the movie, “expert” advice is given or cited.

One person says, “99% of transgender people have suffered some kind of abuse, and 80% of the time, it is sexual abuse.” While this certainly aligns with the stories of those in the “TranZformed,” there is no statistical research agreeing with this statement.

Peer-reviewed studies (1) do tell us several important facts about those who are transgender. Transgender children who are allowed to present as their gender identity and have positive family support have good mental health outcomes. Researchers have also found slightly elevated levels of anxiety in children whose families supported them.

Transgender adults do experience higher rates of anxiety, depression and suicide than non-transgender adults. This is likely associated with years of discrimination, internal conflict, rejection and religious oppression.

Resources available in the past five years have had a significant effect on the treatment and acceptance of non-gender conforming children, and hence, their overall mental and physical well-being.

Other expert input is offered by Dr. James Anderson. Anderson has a Doctorate of Philosophical Theology. There is no evidence on his professional resume that he has had training in the field of human sexuality or gender identity. Anderson was a pastor and is currently an associate professor of theology and philosophy.

As part of examining Anderson’s background, I watched “Thinking Biblically about Transgenderism,” a 45 minute presentation for a class at Associate Reformed Presbyterian Church seminary in North Carolina.

Anderson formulates his opinions based on several theses; knowing them is key to understanding his perspectives. These include:
Evolution is a secular view not in line with the creation story in Genesis 1-3
Biblical anthropology, as opposed to evolution, must be the grounds for a Christian worldview
Biological sex, rather than gender identity, should dictate whether a person is male or female
The sexual revolution and the LGBT movement are God’s judgement on America

These are some of the tenets upon which Anderson constructs his opinions. None of these viewpoints align with what is known about human sexuality or gender identity by professional mental health care organizations or licensed practitioners in the field of sexuality or gender.

Still, in keeping within Anderson’s belief structure, and by default, Foster’s, it is an interesting exercise to take a literal reading of Genesis 1 and see if such an interpretation can be accurately used as a blueprint for human sexuality and gender.

Using the most restrictive view of Genesis (young earth creation), it is believed that Adam and Eve would have been placed in/created in the garden no sooner than 6,000 years ago. Shortly thereafter, about 5,000 years ago, the first kingdoms started popping up, and along with them, a crude form of writing and a way of keeping records was developed. The first records did not involve storytelling, were more administrative in nature, along the lines of — how many wives, sheep, bushels of barley and olive trees does Kushim have? Drama, storytelling, and poetry eventually came along as languages and writing developed.

Historically we know that about 3,400 years ago, which is at least 2,600 years after the events of the young earth creation story, the Yahwist, or Moses, authored sections of the Hebrew Bible, the Old Testament, including Genesis 1.

Doing the math, a minimum of 1,600 years lapsed between the creation story and when it was written down; remember, there was no form of writing during that time. Oh, you may choose to argue, God’s design was passed down in oral storytelling throughout all those centuries with complete accuracy. It is far more likely, that the people of God, as did other ancient cultures, passed down their legends and stories in terms they could understand, restricted by their time, to explain what they did not understand.

Using science, especially anthropology and archeology, when we’re intellectually honest, we know that about 13,000 years ago, the first humans had gathered into small groups. One thousand years after that, they began to move into permanent settlements marking the beginning of the agricultural revolution and larger populations.

Using this far more likely timeframe for the creation story, another nine thousand years passed until Genesis was written down. Again, we have the same problem of no written records for seven thousand of those years. Seven thousand years of accurate storytelling reflecting the intent of God to a ancient peoples devoid of knowledge of human sexuality and gender is pretty hard to imagine.

Yet, a literal interpretation of Genesis 1 has become the only acceptable Christian view of human sexuality and gender identity in some circles, Anderson and Foster included. They ignore the growing body of information about both areas that has substantially expanded over the last half century.

Anderson’s “expert” voice on human sexuality is not personally academically based, unsupported by those who are experts in these fields, and illogical when considering the history of humankind.

Other expert voices in the film include Dr. Joseph Nicolosi, now deceased, who was a co-founder of National Association for Research and Therapy of Homosexuality. He too was on the advisory board for RHN at his death. Nicolosi viewed the current “interest” in transgender issues as political. Seeing no visible evidence in the brains of transgender people, Nicolosi believed that activists were “trying to make money off these poor people (transgender people who wished to transition).”

Dr. Paul McHugh’s opinions are frequently cited in work of this sort. Even McHugh, an 85-year-old Johns Hopkins University psychologist who believes transgender medicine is a “craze,” admits his oft-cited opinions are not peer reviewed. In a completely dishonest manner, McHugh bases his ideology and ideas entirely on one particular 2011 study from the Karolinska Institute in Sweden. This study is casually referenced in the film without too much detail. Using this study, McHugh claims that trans people had high rates of suicide years after undergoing surgery.

However, McHugh’s assertions do not reflect the findings of the author of the study, Cecilia Dhejne. Dhejne has repeatedly asked people (including McHugh) to stop misusing her research “to support ridiculous claims.” Dhejne has written articles and spoken at conferences about McHugh and others distorting her research.

These accusations of abuse, misrepresentation of data, and truth of Dhejne’s findings are easy to locate, yet, those on the conservative right, including Foster, continue to misrepresent Dhejne’s study to support their anti-trans narrative.

What is true, as stated by Dhejne and others, is that transgender people do benefit from transitioning. The typical result of transitioning is that most people flourish.

Throughout the film, the testimonies of the fifteen slide in and out of description of what most would consider the lives of those who are strictly transgender. Some of those interviewed appear to be transgender, others are intersex, still others are cross dressers, or have strong opposite sex gender expressions.

All those interviewed have had a powerful experience with God. I am all for that. Having had such a conversion experience, I too can resonate with the good that can come of it. I do not however see any scriptural support that someone needs to deny who God created them to be in sexual orientation or gender identity to be in full fellowship with Him.

Conversely, I can see clear evidence in the lives of the more than one hundred transgender people I personally know, either Christian, former Christian, or never Christian, people who are flourishing as a result of transitioning.

The rates of child emotional or sexual abuse stated as solid facts in “Tranzformed” are categorically untrue. My friends include those who were pastor’s kids, happy kids, well-loved kids, accepted, and nurtured kids.

By using lies, twisted research, select interviews, and by promoting unfounded stereotypes, Foster has created a film that serves his narrative — transgender people are sexually and emotionally broken and in need of fixing. “TranZformed” is a dangerous film with unsubstantiated “facts” that continue to do damage to transgender people and their families.

There are reputable resources available. This is not one.
******