By Kathy Baldock on August 23, 2018 in All Posts, Education/Hist.
Tweet

Since publishing my first book, Walking the Bridgeless Canyon: Repairing the Breach between the Church and the LGBT Community, I have given presentation in the US, Canada, Australia, and New Zealand using a 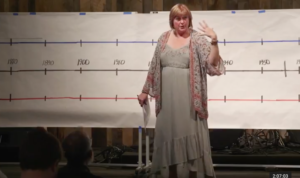 long timeline affixed to the wall to graphically illustrate the interplay of historical, cultural, psychological, medical, social, and religious factors resulting in the discrimination against and stigmatization of the LGBTQ community.

The contents of the book and the teaching method have been highly effective by offering people a framework for deeper understanding and clarity. It is actually the method I’ve used as a once non-affirming (but relationally “nice”) Christian to see the complexity and interplay of so many influences on the traditional Christian view of homosexuality.

Before writing the book, I found myself asking simple questions like: “Why is that this way?”, “How did that happen?”, and most importantly, “Is that what the Bible really says?” The book itself and way I teach has helped others who also seek more insight, clarity, and truth. 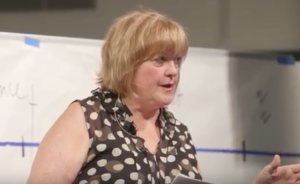 But, Walking the Bridgeless Canyon: Repairing the Breach between the Church and the LGBT Community has just been step one in my work.

In September 2017, I took a trip to Yale University with my fellow researcher, Ed, to find the answer to 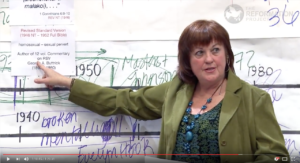 another simple question: “Why did the translation team of the 1946 NT Revised Standard Version (RSV) of the Bible use the word “homesexual” in lieu of two Greek words arsenokoitai and malakoi?”

The translation team was led by Dr. Luther Weigle who was the Dean of Yale Divinity. His archived notes, including those from the translation team, are housed at Yale. So, Ed and I spent five days pouring through about 60,000 sheets of paper in boxes and on microfilm hoping to discover why the team made the decision they did. I had speculated in my frequent presentations that the decision was ideologically and culturally based, not theological.

The medical understanding of homosexuality through the 1950s was not only wrong, it bounced speculatively across a wide and often absurd spectrum of guesses as to what caused it.

I began again to do new research going deeper into the slow medical progression of understanding human sexuality, the impact of the military and federal government on the conversation, and best practices of progressive pastoral counselors mid-century. And with Ed, we travelled to look at more archived translation notes.

A fascinating web began to evolve.

We could clearly see that pre-1980, there was no obvious malice directed at those who were LGBTQ. It was abundantly evident that the earlier teams knew almost nothing about the increasing knowledge about sexual orientation which was slowly coming from human sexuality experts. 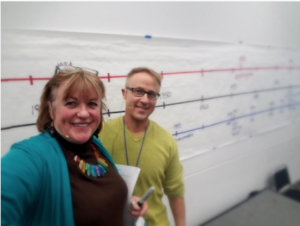 However, there does appear to be a time in the early 1980s, when information was readily available, when translation teams ignored it, and translated from their own ignorance, biases and ideology.

Though I have been surprised by findings and allowed my own biases to be corrected when needed as I dig in deeper, all evidence to date points to intention and malice in some Bible translations that were directed at the conservative Christian market since the 1980s. Rather than those teams revisiting assumptions made by the 1946/1952 RSV team, they appear to have acted with severely egregious intentional ignorance. They enshrined discrimination in Bible texts.

The research is continuing. All pieces of new information are viewed along the same historic timeline framework which I have found to be an excellent lens and tool.

Until the book is ready, here is a good five hour video overview of the current work. It is difficult to tackle this topic in this “short” time. I’ve tried to pick the best connection points, and tossed in some stories, so that I could untangle this damaging mess.

Preliminary sketch of next book

It is not complete with the information I have on each subtopic. Hence, an upcoming book.

I hope that in using the framework I’ve created, I can help viewers escape their boundaries of assumptions and limited information, and see the many layers of faith and sexuality that they may have never considered.

I invite objections and calls for clarification; some of the answers may already be in Walking the Bridgeless Canyon, a 465 page book. Please pick up a copy (book, ebook, available and audio). Other concerns will be addressed in the next book, which will likely be as long as the first. I don’t intend to address all the question while I am busy writing. I want to focus my efforts.

I anticipate negative and uncivil mail as well. I don’t invest any time there. Read the note on my contact page; I mean it.

How you can help me. If you have access to any notes from any translation team post 1970, even foreign language teams, I am very interested in them.

You can email me at: Kathy@CanyonwalkerConnections. com

View all posts by Kathy Baldock →
Where Did Christian Reparative Therapy for LGBTQs Originate?
Fixing the Gays and Continually Moving the Goalpost