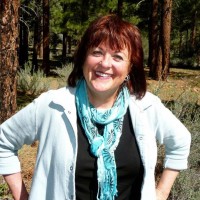 By Kathy Baldock on November 11, 2012 in All Posts, Allies & Advocates, Kindness Counts
Tweet

The Republican Party and conservative Evangelicals and Protestants that supported and voted for Mitt Romney are now analyzing the after-election tallies and theorizing the shortfall they expected in votes. The statistics showed that 78% of Evangelicals voted for Romney and 21% for Obama. 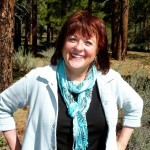 Mike Huckabee, and others, posit that much of the blame for the 3 million vote shortfall lay with Christians that did not get out and vote. Oh, we voted; we just did not vote for Mitt Romney. Christian does not necessarily equal Republican anymore. Many of us voted for a man and a party that we feel better reflect our Christian values.

Here is a list of why my personal Christian values are no longer in alignment with what has become the Republican Party over the last thirty years:

to Reno. I had been attending a conference for gay, lesbian, bisexual and transgender Christians and their allies. After four days without internet, I wanted to get online. For solitude, I went to a completely empty seating area at a nearby gate.

I was there just a few minutes when a man sat in the seat right next to me. I was a bit annoyed; I wanted to be alone. A few minutes later a woman, I rightly assumed as his wife, joined him with her very lovely luggage and left it with him telling him “I am going to shop in the gift stores.” I kept my head down, still intent on being alone but did notice, “Gosh, this man has very nicely pressed jeans, great cowboy boots and a well-pressed shirt.” I never looked at his face; I wanted to write.

A few minutes passed and people from our nearby departure gate started flocking to our “empty” seating area. They were whispering, “Is it him, is it him?” From the whispers, I realized I was sitting next to Mitt Romney. I later read that he had been in Arizona for a conclave of potential Vice Presidential candidates with John McCain.

I am an easy conversationalist and I have a strong sense to listen to the “God voice” inside. Realizing I was possibly sitting next to the next Vice President of the United States, I wondered, “Should I talk to him?” I honestly did not care about the star-quality celebrity status issue. I was prayerfully asking my internal monitor, “Do I talk to him about value and respect for the LGBT community and tell him where I just spent the weekend, with hundreds of LGBT Christians?”

The answer came back, “Don’t waste your time. He will not hear you.” So, I kept my head down and continued working.

After awhile, picture snapping and hand shaking ensued. The favorite state son was heading home to Utah on a plane filled with admirers. I ignored Mitt Romney. Nothing drew me to him; I did not sense receptivity.

And four years later, still, nothing drew me to him.

On my 18th birthday, I excitedly went to the Town Hall in Tenafly, NJ and registered as a Republican. I have voted in ten presidential elections and in every election throughout my adult life, never missing one opportunity.

I became a Christian 30 years ago and the principles of the what the Republican Party has become do not reflect my strong Christians principles. I am not interested in culture wars and division and exclusivity. With an arrogant blend of skewed Christianity and politics, they have driven people like me away. They are a party that seeks to use power to legally discriminate and withhold rights from others; I am strongly for equality.

To my fellow Christians who are red-faced and wanting to scream the words “fiscal responsiblity” at me, my life verse is a collection of instructions from Isaiah 58:6-12. God speaks through Isaiah and tells the people (paraphrased): stop doing all those things you think please me and make you look holy. Here is what I asked you to do — fight against oppression, break the chains of injustice, share your food with the hungry, take care of the homeless. And in exchange, I, God, will ensure that your lives will become new, all men will see My light in you, I will answer your prayers, I will fill your lives with My things and make you healthy and give you names of honor in your communities.

And, I actually believe this and attempt to live my life in this manner.

I consider myself a conservative Christian, not a dominionist or a fundamentalist, just a person who seeks to emulate Jesus in a 21st 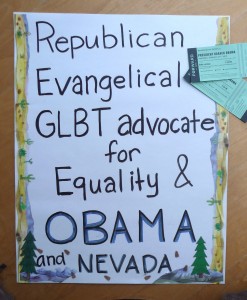 As a straight Christian advocate for full inclusion of LGBT Christians in the church, I get plenty of mail. A few years ago, it trickled in; I would do a happy dance when I received an “I get it” letter. Now, that “I get it” mail pours in. Christians in growing numbers, both straight and LGBT are weary of a party and version of faith that is more known for what they are against, than what they are for.

Maybe we are the 3 million vote short fall. We voted; we just did not vote against our Christians principles. We voted with them, and we voted for Obama.

[This is a post outside of the norm of my quasi-non-political genre. I have commented on policies,  marriage equality, DOMA, Don’t Ask Don’t Tell.  I have avoided posting on my blog any opinion on the 2012 Presidential Election. This post is written in the persona of me, Kathy Baldock, not Canyonwalker Connections.
This is the only avenue I have to make widely public, my impressions on the election. The GOP would be wise to realize that I am not an anomaly; I am a growing segment of the Evangelical movement.]