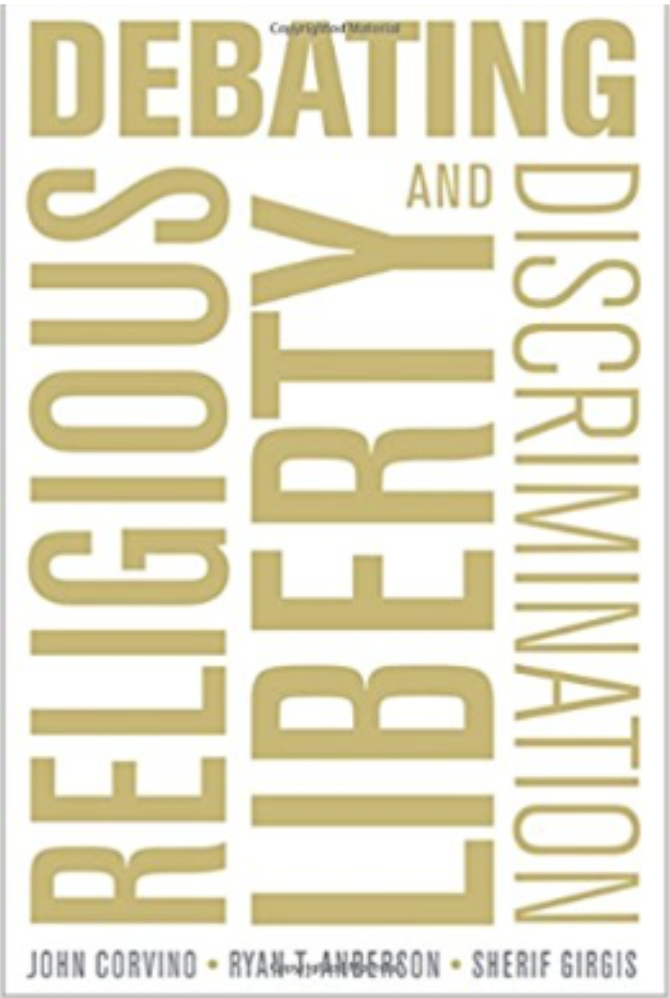 Both sides state they share a “distaste for the typical ‘with us of against us’ polarization that plagues most public debate today.” Simplified, Corvino explores if religious liberty is becoming religious privilege favoring certain kinds of religions (typically conservative Christians) over other kinds of religion, and even secular beliefs that may be just as strongly rooted and motivated as religious beliefs.

As the counterpoint, Anderson and Girgis argue that those who advocate for progressive inclusion of protections and rights demand consent, seek to stifle dissent, and want to deny legal protections for those who do not agree with the equal moral status of LGBT people.

Corvino then writes about the original Religious Freedom Restoration Act (RFRA) of 1993 which resulted from two test cases – the use of peyote in religious ceremonies by Native American Indians, and an exemption for compulsory education beyond eight grade sought by the Amish. Corvino then addresses the more recent applications of RFRA’s and First Amendment Defense Acts that seek several protections/privileges for citizens and businesses who, desiring to fully practice their religion, believe it is necessary to discriminate against certain groups of people, primarily, in the scope of this book, LGBT people.

Corvino does an excellent job of presenting his thoughts. His writing is accessible; his foundational tenets are well structured; his examples are easy to follow. He addresses several recent test cases of RFRA’s (Hobby Lobby, Kim Davis (the Kentucky county clerk who refused to issue same sex marriage licenses after the Obergefell SCOTUS decision), and Sweet Cakes by Melissa (the Kleins who would not bake a wedding cake for a lesbian couple)).

Corvino’s section on Discrimination and the Law touching on material harm (cutting off access to services) and dignitary harm (treating people as though they are less than equal in moral standing) were excellent.

Dignitary harm is the one which I personally find is difficult for “the other side” to comprehend the depth at which it operates. Telling a couple to go get their cake at another bakery is more about systemic inequality than access to a cake. The trickle-down that trickles down from pulpits, cake shops, event venues, photographers, county clerks, employers, lack of protection under state laws can be drowning.

Corvino concludes that religious liberty should not be allowed “to morph into religious privilege licensing discrimination and fostering exclusion and inequality.” (p 104) He adds, “The law is not the only way to address religious liberty and discrimination. Education, including interfaith dialogue, can go a long way toward increasing sensitivity to diverse groups of citizens.” (p 104)

Who could argue with that? Right?

The counter-point by Anderson and Girgis does.

Full disclosure here. I am a straight evangelical Christian advocate for full inclusion of LGBT Christians in churches, and obviously likewise, want full social inclusion and equality for LGBT people. This is the second book by Anderson that I have read, and have now reviewed.

As I wrote in my review for “Truth Overruled,” “Anderson, in constructing these “truths,” ignores the social history of marriage, elevates procreative complementarity – the notion that only a man and a woman can create a child – as a condition of marriage, and discounts all major professional medical and psychological associations’ statements on the natural variations of sexual orientation and gender identity. . . . ‘Truth Overruled’ is devoid of knowledge of social history and science and serves to slow the progress towards balancing and honoring both civil rights and religious freedom.”

Again, I have the same foundational problem with Anderson’s work. It is clear that he does not respect and honor the expert opinion of every major professional mental health care organization in the U.S.: that human sexuality naturally exists along a spectrum from heterosexuality to homosexuality. Several times, Anderson/Girgis refer to LGBT people wanting equal treatment for their “sexual desires.” It irked me each time I read that.

Not only did I find the Anderson/Girgis portions less clear than Corvino’s contribution, I kept having the feeling that maybe if I entered into the murkiness of the smoke and mirrors, I might be “dazzled” into questioning my beliefs.

I read quite a bit, and critique almost as much. I felt as if the Anderson/Girgis section could have been simplified, as Corvino brilliantly did. But, then again, when the foundational beliefs are so deeply flawed (that conservative Christians have a right to discriminate against people as validated by their understanding of Scripture), it may be necessary to bedazzle a bit to substantiate discrimination.

The administration of Bob Jones University did much the same in the 1960s and 1970s to justify their clearly discriminatory and racist stances with their interpretation of Scripture. What they postured, and tried to sell publically as religious liberty, was clearly discrimination.

I did not expect Anderson/Girgis to sway me, but I did want to understand why they would value religious liberty over equal treatment of a class of people. Mentally, I just kept coming back to what is clear to me – they elevate their biblical interpretation over what has unfolded, and continues to unfold about human sexuality — people naturally exist along a spectrum from heterosexuality to homosexuality, and from masculine to feminine, and from male to female (with 31 known conditions of intersex).

Using selective and narrow interpretations of verses addressing same-sex behavior as justification for the need for protections to discriminate is not religious liberty, but religious privilege, as Corvino indicates. It needs to be stated that discriminatory interpretations are not universal within Christianity. There are increasing numbers of progressive Christians, such as myself who express our faith toward the marginalized an minorities differently

I did not think the Anderson/Girgis counterpoint addressed, or even understood, an immensely important point raised by Corvino – that of dignitary harm. When the law allows those with narrow discriminatory interpretations to legally and continually do harm to a class of people, the cumulative effect can be immense. But, if you lack the ability to see the humanity and dignity of the ones harmed, your “right” to discriminate and the oppression you imagine you may be suffering by having to comply with the law becomes of greater personal concern.

I did make extensive notes in the margins of the Anderson/Girgis section. I could go point-by-point, but ultimately, I cannot respect justification for discrimination based on culpable ignorance concerning human sexuality on the part of Anderson and Girgis.

In all, I am glad that the two sides presented a written debate which may inform those who are decided, or not, as to their salient points. There is worth in the exchange.

Here is my challenge to Anderson – I have now read two of your books. Read my book  Walking the Bridgeless Canyon: Repairing the Breach Between the Church and the LGBT Community  which is a far more expansive look at human sexuality, the social and sexual roles of men and women, along with the psychological, medical, social, political and religious lenses through which we’ve viewed LGBT people and interpreted the Scriptures. Let me know where I got it wrong, and with all the research presented and assimilated in a response, tell me why should the conservative Christian privilege to discriminate against LGBT people be protected. I hope Anderson expands his base and information before he makes the same foundational mistakes on his upcoming book on the transgender people.