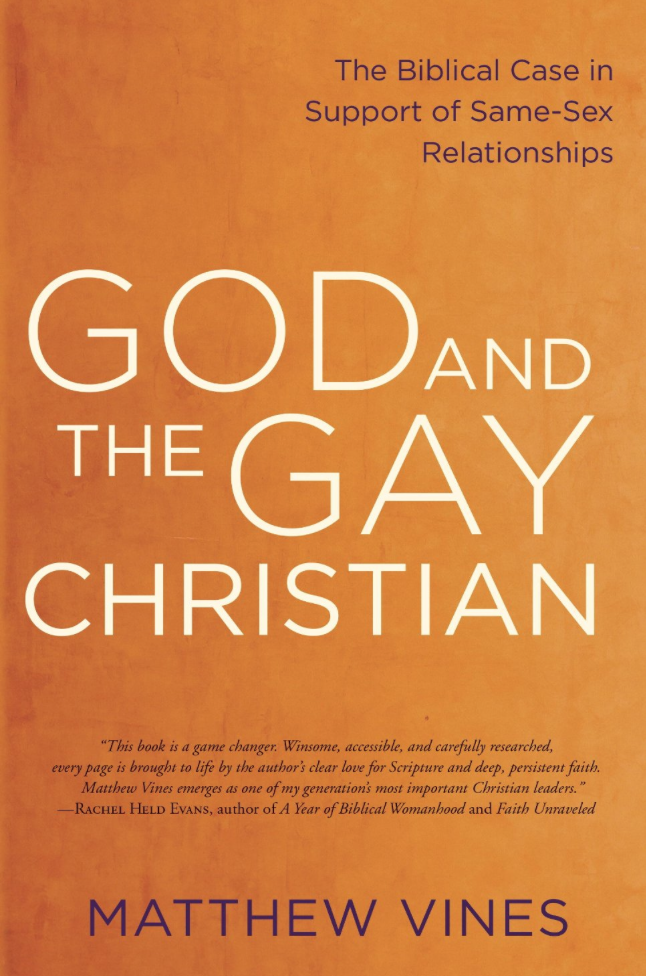 God and the Gay Christian — The Biblical Case in Support of Same-Sex Relationships by Matthew Vines is an important book for the conservative Christian church, now. Vines presents clear and well-sequenced arguments to support a more accurate interpretation of six passages in the Bible which have been used to exclude lesbian, gay, bisexual and transgender (LGBT) people from conservative churches.

Vines was raised in a conservative Christian home in Wichita, Kansas. In his family, gay and Christian were not words that co-existed side-by-side, until Vines realized he was gay and a Christian. He began a several years’ project to make sense of the Scriptures, historical Bible teachings and his faith. God and the Gay Christian — The Biblical Case in Support of Same-Sex Relationships is the culmination of that work.

Arguments for inclusion of lesbian, gay, bisexual and transgender (LGBT) people in faith communities have evolved over the past 45 years.  Often, arguments for inclusion have been dismissively labeled as “pro-gay theology.” Vines presents a careful and more accurate reading of Scriptures in context, and with understanding of the culture in which they were written. The information in his book reveals insights that may be new information for many readers.

Like Vines, I did not think a person could be both gay and Christian. For over two decades in the Evangelical church, I thought the two words could not possibly coexist. Then, I met gay people who identified as Christians. How could I remain faithful to God and His Word and honor their testimony and  witness of the indwelling Spirit of God? Relationship created the impetus I needed to confront my theology. At the time, 10 years ago, there were no books that answered my questions to satisfaction.

God and the Gay Christian — The Biblical Case in Support of Same-Sex Relationships is the book I wish had existed then. The arguments are well researched and clearly presented. Experience tells me most Christians who do not believe that LGBT people can be Christian have not investigated the issue beyond reading words on the page. Vines walks his readers through an easily understood process of dissecting the six passages in the Bible that have been used to create a sexual ethic for those who are LGBT and wish to participate in conservative churches.

Life-long celibacy is often suggested as a requirement of inclusion by some faith communities; Vines investigates the historical and biblical support for such an option. As same-sex marriage rapidly becomes a civil rights reality in the U.S., conservative Christians need to consider deeply whether there might be biblical support for same-sex marriage. Vines offers a beautiful explanation of marriage as seen in Ephesians 5.

God and the Gay Christian — The Biblical Case in Support of Same-Sex Relationships is sure to create controversy. Though the topic is explosive, the book is written in an inviting tone that mirrors Vines himself. (If you want to get a sense of who he is, watch the video that was the seed of the book project.)

The movement for inclusion of LGBT people in the Christian church is not new. Forty-five years ago Rev. Troy Perry established the Metropolitan Community Church for LGBT Christians who were no longer welcome in churches once they came out. Over the past decade, the strength of the witness of LGBT Christians compels growing numbers of  Christians to ask, “Can a person be both gay and Christian?” The question is now back on the doorstep of the churches that asked LGBT people to leave 45 years ago. The question, how we engage in the process of addressing it, and what we eventually decide are crucial to the health of the conservative church going forward. It is time for thoughtful, informed, and scholarly consideration of the question.

God and the Gay Christian — The Biblical Case in Support of Same-Sex Relationships  is a necessary tool in helping to lead that dialogue.

[Matthew Vines is the founder of The Reformation Project which will host the next conference in Washington, DC on November 6 – 8, 2014. I am on the Board of TRP. We hope we will see you there!]