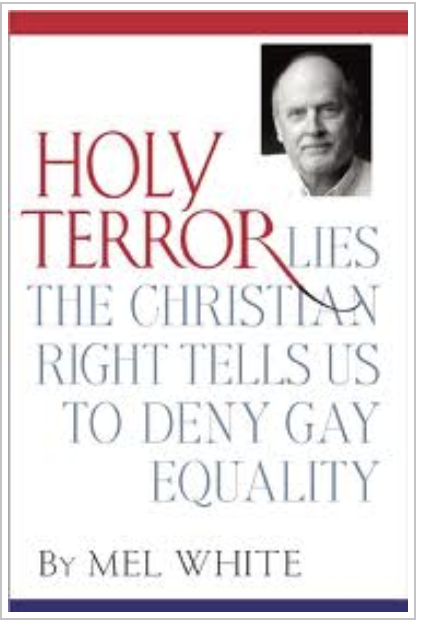 HIGHLY RECOMMENDED. Education, engagement and encouragement between the Christian Church and the gay, lesbian, bisexual and transgender Christian community is what I do. I talk with, listen to, read and follow seemingly otherwise kind and Jesus-esque people but, when the topic switches to the gay community, some become machines motivated by fear and unleashed in ignorance. Why? And how, on this one topic, do some Christians neglect the clear Biblical mandates to care for the poor and  the outcast and turn all their negative energy onto the GLBT community?

“Holy Terror: Lies the Christian Right Tells to Deny Gay Equality”, by Mel White, is a treasure map to the answer. For thirty years, the Rev. Dr. Mel White served the evangelical Christian community as a pastor, seminary professor and ghostwriter to powerful and famous leaders, including Billy Graham, Pat Robertson and Jerry Falwell. His autobiography Stranger at the Gate (1994) is a book I recommend often.

I picked up “Holy Terror” and did not put it down until I finished the last page. I could summarize it all in a few words:

Church, you got played.

The Evangelical and Baptists denominations have been so severely shifted off the course of the Gospel — love and serve — and have drilled down on the “dangerous” gay community set to destroy our families, churches and even country. I have worked intimately in the GLBT community for almost a decade and none of that fear-filled message resonates with me.  Many Christians have become so consumed with thwarting the ‘radical gay agenda’ that they neglect the poor and needy and lose any ability to attract people to our Beautiful Savior. Who can we “thank” for this diversion and inoculation of deception and ignorance? Several well known Christian leaders have guided us to a place of blindness and passivity where fundamentalist faith is married to politics. The people who now dwell in this place have become the new public face of Jesus.  This unholy alliance of fundamentalism and politics will do more to destroy the church than any number of loving gay couples joined in marriage ever could.

“The Bible says it, I believe it, that settles it.”

Of course, they are selectively literal, about women often, and about gays very often. Not a day in my life as an advocate passes that it is suggested that I repent, leave the country, stop destroying the church, stop speaking up (because I have female anatomy) and clean up my lifestyle. The intensity of the attacks have increased over the past year. There is a renewed vigor reminiscent of the early 90‘s, but worse; this version is meaner and filled with more lies.

With over 31 thousand verses in the Bible, how did the six on same-sex behavior trump the rest?  White lays out the forefathers of this modern fundamentalist movement. Francis Schaeffer began the call to reclaim America as a “once great Christian nation” from secular forces in the 40’s and 50’s. Evangelicals were not involved in politics. (Another great read about this time period is “From Bible Belt to Sunbelt: Plain-Folk Religion, Grassroots Politics, and the Rise of Evangelical Conservatism“ by Darren Dochuk.) Using hyperbole, half truths and lies, Schaeffer rallied Christians to fight “judicial tyranny.” He told Christians that the separation of church and state was a new lie (guess he missed the Jefferson quotes); Schaeffer set the stage for Christians to blend politics and faith. To his credit, Schaeffer never exploited the fear of homosexuals to rally the troops; after all, this was the 60’s — gays were still hiding out in their closets.

W.A. Criswell, the senior pastor for 58 years of the 28 thousand member Dallas First Baptist, “fired the first shots in the fundamentalists’ war to purge ‘moderates’ and ‘progressives’ from their churches” using the litmus test of “the Bible is inerrant and anyone who disagrees cannot be trusted theologically.”

[I must rein in possible critical-of-me voices here: I love the Word of God. I study it; I read it; it guides my life and my work. I also believe it is a living text for generations that grows in both its application and understanding within cultures over time. When the last Bible author put down his pen, all wisdom and expansion did not stop. Groups included in the Good News of the first century were the outcasts of their day and that message of love and inclusion did not stop. As a woman, I am grateful that I am not restricted to the gender and legal roles dictated by first century Roman Empire and burgeoning church.]

With the charismatic assistance of Criswell beginning in the 1990’s, fundamentalists won control of the national boards and committees of the Southern Baptist Convention. Literal understanding of the Bible became the measuring stick as ordained women were now denied the right to preach, and gay pastors, teachers and leaders with moderate views were purged from the denomination.

Jerry Falwell began to use the term “gay agenda” and threatened his followers that “God and Christianity” would be eliminated from American society by the gay community. Using a satirical essay, “The Gay Manifesto” written by Michael Swift in 1987 , boosted by hyperbole, half truths and lies (a la Schaeffer), Falwell instilled fear, raised millions, and expanded mailing lists. The Christian right was now organized around a false fear of all things homosexual by a “man of God.”

Pat Robertson formed the Christian Coalition and “recruited, trained and equipped the army for political action.” He perfected the demonization of the gay community and reduced their existence to “disease, despair and decadence.” Anything that went wrong was attributed to the gays. He became rich and influential and he was effective.

James Dobson, President of Focus on the Family, had almost 26 million weekly listeners to his radio show. (Another recommended book which I finished last month “James Dobson’s War on America” by Gil Moegerlie ) Egotistical, controlling, power-hungry and influential, Dobson continued to use the fear and loathing of the gay community to raise millions and recruit support to “take back America.”

D. James Kennedy, Senior Pastor of Coral Ridge Presbyterian, grew a mega-church in Florida and lead 459 Christian fundamentalists, pastors and leaders to sign “A Manifesto for the Christian Church” in 1986. Among the twelve social evils listed in the  Manifesto, in order of importance are: 1. abortion, 2. homosexuality, 5. unjust treatment of the poor and 8. racial discrimination. (Homosexuality is more worrisome that caring for the poor? Church, you got played.) White does an excellent job laying out the details surrounding the Manifesto with players, dates and intentions. The direct link between gays and the destruction of America is centered in this document. (Perhaps we have located the “Radical Fundamentalist Agenda.”) The “logic” follows that the Bible is inerrant, and because the words we read say God condemns gays, then, if we do not fight against them, God will condemn America. So, if Christian fundamentalists do allow for the extension of civil rights, God gets mad and the nation suffers. Ergo, allow gays to survive and thrive, and God destroys America.

The next two chapters are the gems of the entire book: “The Secret Meeting at Glen Eyrie: Declaring War on Homosexuals” (1994) and “The Glen Eyrie Protocol.” These two chapters read like a secret spy novel. Forget about the crazy “radical gay agenda” being plotted in disco-blaring gay bars; reading the account from audio tapes discussing the goals of these conservatives to intentionally manipulate Christians and the American public into hatred of the GLBT community is maddening.

As was true then, and today, many religious and conservative family leaders and groups ignore the overwhelming scientific, psychological, historical, experiential, relational and Biblical evidence concerning the gay and transgender community. They really believe what they say because it is so deeply ingrained in their psyche and religious dogma.

The second half of “Holy Terror” presents: the great fundamentalist heresies and the idols which have diverted the absolute focus off: looking like, serving like and loving like Jesus. White has wonderful stories and insights of how now to engage fundamentalism and how to reclaim both our political values and the message of Jesus Christ in the church.

I strongly encourage Christians who are befuddled as to why we seem to have lost the message of the Gospel and have witnessed the Good News twisted into a Declaration of War to read “Holy Terror.” Also, gay Christians need to understand where a loving Book went off course and how they can to help steer it back to its original course. To the non-church gay community, I could (and do) weep for the message you have been given about who Jesus is and what Christianity is. You have seen Christianity at its worst in modern times and many Christians have failed you by being passive and lazy and ignorant. We’ve been lead around like sheep, by the wrong shepherds.

The lies are deep seeded and rampant. Just last Sunday at Houston First Baptist, Pastor Gregg Matte, at the 4:30 mark, dropped  one of the most egregious lies of conservative “expert” Paul Cameron into his Mother’s day message.

“Did you know that the average age of death for the homosexual is 41 and of AIDS is 37? One percent of the population lives to old age, 1%.”

Let’s just look at the source of this one little lie spoken on Mothers Day to almost 6,000 congregation members, many, parents of gay children.

Where does this seemingly crazy statistic come from? Paul Cameron, the guru of the conservative right, the human sexuality “expert” who holds zero credence in the professional community, did a “study” at the height of the AIDS crisis by going to the obituaries of a gay newspaper and averaging the age of death from the listings. Scientific? Hardly. And yet, this number is still repeated over and over by well-intentioned, loving Christian leaders thinking they are telling the truth with love.

Hey church . . . you got played, massively. Unfortunately, this is not a game. We have gotten off message; we have missed thousands of millions of chances to be Jesus to a world in need of Him; we have discriminated against an entire group of people because some Christian leaders did not understand their own Bibles and valued power over service; and we have suffered too, losing our own ability to understand grace. Where would we be as a faith community if we had not been so distracted? What could have been the beneficial service and financial impact on our country and the world?

Read Mel White’s “Holy Terror,” get informed, get angry, then get back on track to the real job of Jesus-followers by acknowledging the harm, our part in it, and then apologizing, and returning to the Good News of the wildly loving, extraordinarily inclusive, equality making Jesus.

Bonus comment: The lies and half truths are not limited to people mentioned in Mel White’s book “Holy Terror”. I cannot miss this opportunity to highlight other fundamentalists, family group leaders and media people who lie about the gay, lesbian, bisexual and transgender community. If you read or listen to any commentary about the gay, lesbian, bisexual or transgender community from any of these people or groups on the below list, they are a product of the above dogma. However unintentional, they are not telling the truth about the gay and transgender community. I have invested my life’s work on this issue, and I can spot a lie in seconds. Some of you are still under the misty haze of the great scam that has so infected the Christian church that you may not be able to discern lies from truth on this issue. So, beware of:

Glenn Stanton, Focus on the Family

Jim Daly, Focus on the Family

Ray Comfort, On the Box

Kirk Cameron, On the Box