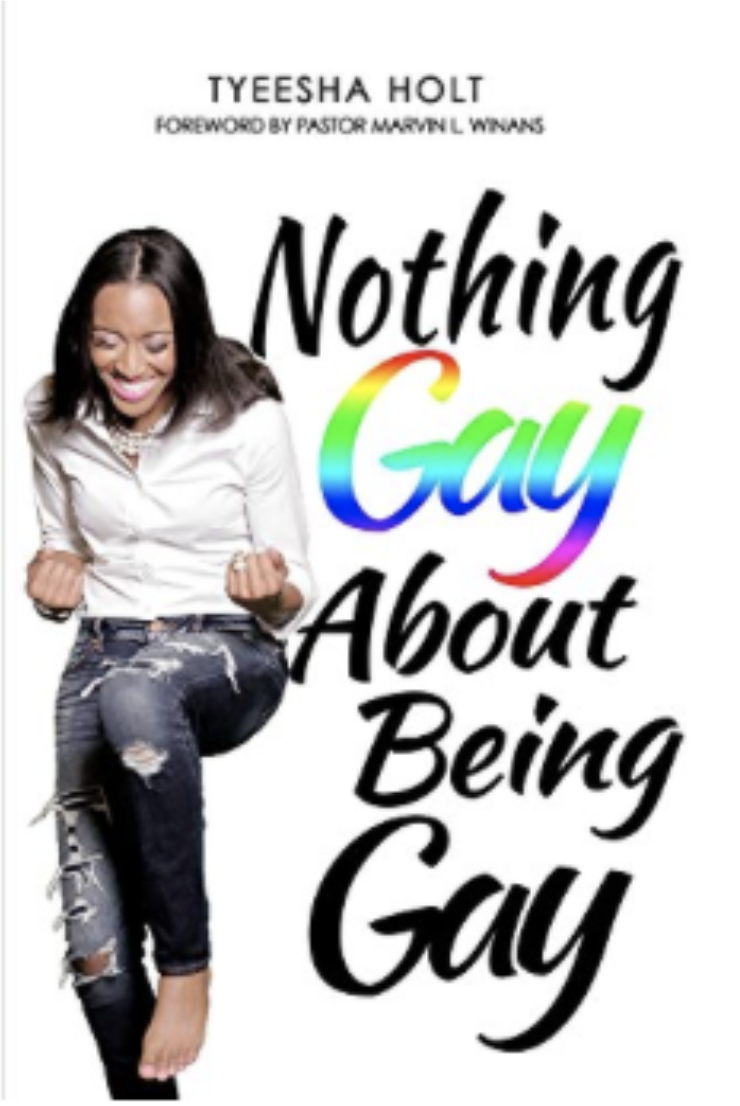 I am an avid reader, and it is without doubt that this was the worst book I have read in at least a decade, perhaps more.

Holt came into my view when a friend in the SF Bay Area disappointedly told me that Acts Full Gospel Church, Oakland was bringing her in to speak. I decided to read her book.

Overall, this a a story of a bad family life, bad decision and more bad decisions. Holt tell readers from the onset “The devil through the erosion of the traditional family has a plan to deceive and destroy a generation. This is the ultimate goal of the homosexual agenda.” What does that even mean? Does it mean that gay people in cahoots with the devil are out to destroy people? Who wrote this agenda and WHERE on earth is this written down?

I am a straight evangelical Christian with two adult straight children. Not only does Holt’s life NOT mirror the lives of thousands of LGBT people and couples I know, I have never heard one person say they are intent on destroying traditional families and people — they simple want to coexist with equal dignity in society and in the church.

Throughout the book, Holt’s bad choices are portrayed as “the devil made me do it.” My goodness, we all have difficulties, and many of us have come from backgrounds of abuse, YET, we are responsible to find whatever method takes us to health and wholeness. For some, as it was for me, it was largely through my faith. Holt seems to defer to the second party devil tempting her and dragging her down a path of destruction. Come on, bad choices beget bad choices and eventually you need to make changes and good choices.

Holt continually uses the term “lifestyle” which is non-descript.

Does “lifestyle” mean: being gay, or openly living as gay perhaps even married and maybe with children, or identifying as gay, or having gay sex, or being attracted to the same sex — yet not having gay sex, or some other variation of how a person of any sexual orientation may live his or her own life. Holt never tells us what she means by the word.

There are many possibilities as to Holt’s sexual orientation — she could be a lesbian “not in the lifestyle;” bisexual, or someone who through so much abuse and bad choices decided there was safety (?) for her with women rather than men. It does seem all sexual choices were a wreck for Holt however.

Holt writes: “being gay is not a person, it is a spirit.” Too bad absolutely no licensed mental health professional in the US agrees that sexual orientation is a “spirit.”

What we do know about sexual orientation is that it is not a result of abuse or a choice. Every major professional mental health care organization in the U.S. agrees that human sexuality naturally exists along a spectrum from heterosexuality to homosexuality. They also agree that people cannot change their natural orientation and attempting to do so is mentally and emotionally dangerous, frequently associated with physical negative consequences. Holt assigns people’s non-heterosexual orientations to “this spirit called homosexuality.” WHERE is this spirit listed and named in the Bible? My goodness, let’s stick to what we read and not make things up.

It is wholly dismissive and inaccurate for Holt to even slightly infer that her sexual and abusive past mirror that of the LGBT population. She makes many instantiated claims as to why and how people are gay and live. These statements are her opinion from her perspective and have no truth as reflected in the general LGBT population. She also claims without substantiation that “Texas is one of the biggest state where people practice the homosexual lifestyle.” While it is a big state, it is not even in the top ten of percentage of LGBT people in the population.

Holt spent 86% of the book telling the readers about her life. THIS is the part of the book that gives Holt’s writing a one star review.

IF the point of the book is the power of God to change and person and I FULLY believe that because I am one such person, does the glorification of ALL THOSE BAD CHOICES AND BEHAVIORS need to be told in who-the-heck-cares detail? Dreadful. If a parent were to give this book to a young person “struggling” with sexuality of any sort, you would be handing them a play-by-play of what to do and try.

Absent father, distant mother does NOT equal lesbian. I had that dynamic and poof — I have always been straight. Did I make horrible choices? Yes. Not because the devil made me do it. Bad parenting often makes insecure kids who rebel in all kinds of ways.

Holt’s brief engagement with Scripture in the midst of stories of sex and abuse are quite juvenile. Scripture was not written in English with modern understanding of the natural spectrum of human sexuality. One must read IN CONTEXT, which Holt’s interpretations are not.

The misuse of Deuteronomy 22:5 which convinced her to not wear masculine clothing is blatant. Jewish scholars (after all, it is THEIR book) tell us the passages were about men wearing the clothes of women to hide from going off to war, or women using men’s clothing to try to go off to war. It has NOTHING to do with cross dressing, after all, the Jewish feast of Purim allows people of both sexes to dress in costumes of either sex.

I am glad Holt left her destructive life patterns and bad choices when she came to faith. To make her story one of anything similar to the life of LGBT people is QUITE A STRETCH. Her ministry is part of the problem largely existing in the black church in America which, in not accepting the natural spectrum of human sexuality, is forcing gay men to marry and live on the down-low. The HIGHEST percentage of new cases of HIV/AIDS in the Us is in young black women having sex/being married to men on the down-low.

As you continue to buy into the concept that homosexuality is a spirit out to destroy marriage and the next generation, you ignore what is normal and destroy lives by forcing people to live lives in secret and severe shaming.

Shame on the churches who bring in this speaker. If you want to hear that she overcame a life of bad choices and abuse — great, go for it. But if you attach this to the “problems” of those who are not heterosexual, YOU are part of the destruction of your own people — shaming them, pushing them from churches, forcing HIV/AIDS rates to rise in young women.

Get educated with REAL facts, history, solid interpretation of Scripture, and get to know LGBT people who are both Christian and not.