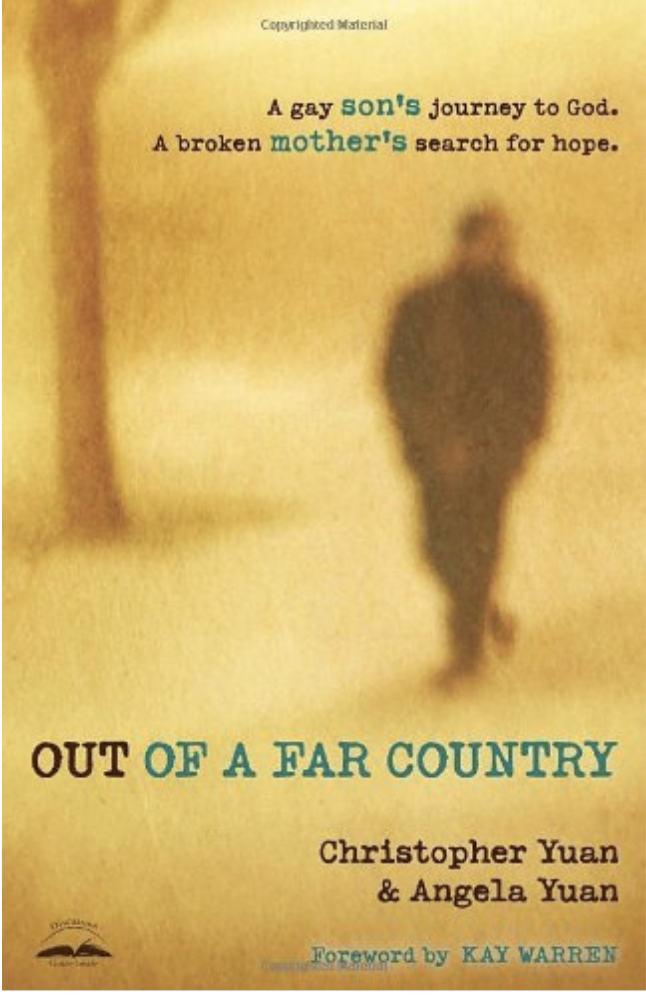 Category: Uncategorized
Genre: Damaging to LGBTQ Community
Publisher: Waterbrook 2011
Go to this Review on Amazon & Vote “Helpful” at end of the Review

At the urging of many Asian Pacific Islander (API) LGBTQ (lesbian, gay, bisexual, transgender, queer) Christian friends, I’ve read and reviewed Christopher Yuan and Angela Yuan’s jointly authored book “Out of a Far Country” (WaterBrook Books, 2011). Specifically, within the API queer community, this book has become somewhat of a go-to resource that family members and pastoral staff give or suggest hoping that the recipient LGBTQ reader will follow in the footsteps of Christopher Yuan and surrender their lives and sexuality to God.

The book is subtitled “A gay son’s journey to God. A broken mother’s search for hope.” Though there is minimal recognition of poor parenting by mother, Angela when she asks her son, “How could I have been a better mother?” (p 158), the focus of the book falls squarely on the reckless behaviors of son, Christopher.

Christopher participated in the party scene of Louisville at first, and ever increasingly to other larger cities. He did and dealt drugs; he was dismissed from dental school, and ended up serving three years in prison when he was caught selling drugs. Throughout the book, and certainly within the context of materials presented in Yuan’s speaking engagements, there is a strong suggestion that his destructive behavior is rooted in Christopher’s identification as gay.

As I read the book, I began to understand the constant complaints of my API gay friends who said the book frustrates them and they did not relate at all to Christopher’s story. Yes, they were gay, but . . .

Typically, my API gay friends did not lead sexually promiscuous lives filled with extravagant parties, drugs, or dealing. They felt insulted and embarrassed that their sexuality would to be linked as to a possible outcome of a life as depicted by Yuan’s bad choices and reckless behavior.

The many responses I’ve heard from gay Christians can be condensed to: “That is not me. That is not my life, or how I choose to live. Why are people giving me this book thinking this is my life, or is in anyway helpful? It is hurtful.”

All the problems, all the bad choices, and recklessness seemingly hinge on Christopher Yuan’s gay orientation. The premise appears to be — if he would just move toward getting his sexuality under control, all the other pieces of his expected best life would fall into place.

The expectations and progression of the book certainly move in that direction. It becomes almost impossible to separate the life of an addicted drug dealer from the life of a gay man. Unfortunately, the lines are badly blurred and Christopher’s story becomes one perceived about gay people in general.

Two other entwined components operating in the mother-son story are timing in America, and the ethnic cultural element.

I have frequently commented in public speaking that the worst period to realize one’s identity, or come out as an LGBTQ Christian in America, was between 1980 and 1992 – the timing which is operating as a substratum of this book. The level of public and religious shaming during that period was at a peak.

Culturally, API groups (generally inclusive of China, India, Japan, Korea, the Philippine Islands and Samoa) are honor/shame cultures. Unlike those in western cultures (generally) who feel shame when they’ve not lived up to their own expectations for self, people in honor/shame cultures experience shame when they feel they do not live up to community’s rules and expectations. They lose, keep, save, and gain face in behaviors and choices. A typical response to shameful situations tends toward passivity and extreme politeness. Shame in such cultures is also intricately tied to the fear of rejection and loss of family and community.

In “Out of a Far Country,” all these dynamics are running concurrently – bad choices by both mother and son, the pressures of an honor/shame culture, all taking place in a particularly religiously oppressive time for gays in American Christian churches.

Perhaps this may help to understand why handing this book to a gay person, particularly an API gay person, might range from far less than helpful or relatable to intensely offensive.

Of course, Christopher’s sexuality cannot be separated out of the story of this book. It was a significant part of the disappointment and shaming by his parents, in particular, his mother, Angela.

I am a parent of two adult children. As a mother, I know, we each make mistakes in parenting, and some of us recognize them and correct the actions, or make amends. Admitting I was not the ideal mother, and somewhat feeling like I am betraying the “sisterhood of the motherhood,” mother Angela’s narrative often exasperated me.

Combined with cultural honor/shame, Angela made some very bad choices in parenting. Again, how can one separate out the reactions of shamed gay son from the reactions of a son to his mother’s unmeetable expectations and control? Sadly, the lines are blurred, and we see the gay son as the problem.

I kept wondering why this book seems to hinge so strongly on Christopher’s sexuality? I can get behind a book about redemption and the return of two prodigals, both mother and son, to God, each for their own healing. Who doesn’t love a good redemption story? But that is not the market this book speaks to. The gay element becomes the issue under the spiritual microscope in need of surgery.

Near the end of the book, we read about Christopher’s internal struggle about what to do with his sexual attractions. Once clean from drugs and no longer dealing, he still remained attracted to men. He wrote, “If I could be a Christian and have a steady relationship with a man, that would be just about ideal. I’d go to church with him and maybe even start a family. It would be such a relief if this could all be reconciled.’ (p 186)

Christopher goes on to resolve that he can live without many things, including sex, which he felt he had made an idol in his life. In searching the Scriptures “looking for biblical justification for homosexuality” (p 186), he does not find any and concludes he must live a life of “holy sexuality.”

I was saddened when I read of Christopher’s imagined “ideal” life knowing he could have that, yet is trapped by several systems: literal and non-contextual reading of the Bible, family and cultural shaming, and a career and reputation he has built speaking mostly on a “Christian Response to Homosexuality” and “Homosexuality: Texts and Hermeneutics.”

Christopher Yuan and Angela Yuan lived and made bad choices in a restrictive and shaming system. They eventually each found a path to God and healed. That is very good.

The focus of the story as “A gay son’s journey to God. A broken mother’s search for hope,” seems prescriptive to those of us who realize you can be LGBTQ, love God, serve Him, commit to Him, lead relationally committed lives, create families, and be Christian.

I would suggest the book subtitle be “An addicted son’s journey to God. A enmeshed, controlling mother’s search for hope.” But who wants that niche of book? Unfortunately, it seems more lucrative and righteous in the conservative Christian market that we focus on fixing the gays.

Before you feel compelled to give another LGBTQ Christian or their family “Out of a Far Country” or any other Christian book hoping they will change their orientation or remain celibate for life, please consider investing your time in empathetically learning what may challenge your perspective on LGBT Christians by reading  Walking the Bridgeless Canyon: Repairing the Breach Between the Church and the LGBT Community , God and the Gay Christian: The Biblical Case in Support of Same-Sex Relationships  and  Torn: Rescuing the Gospel from the Gays-vs.-Christians Debate