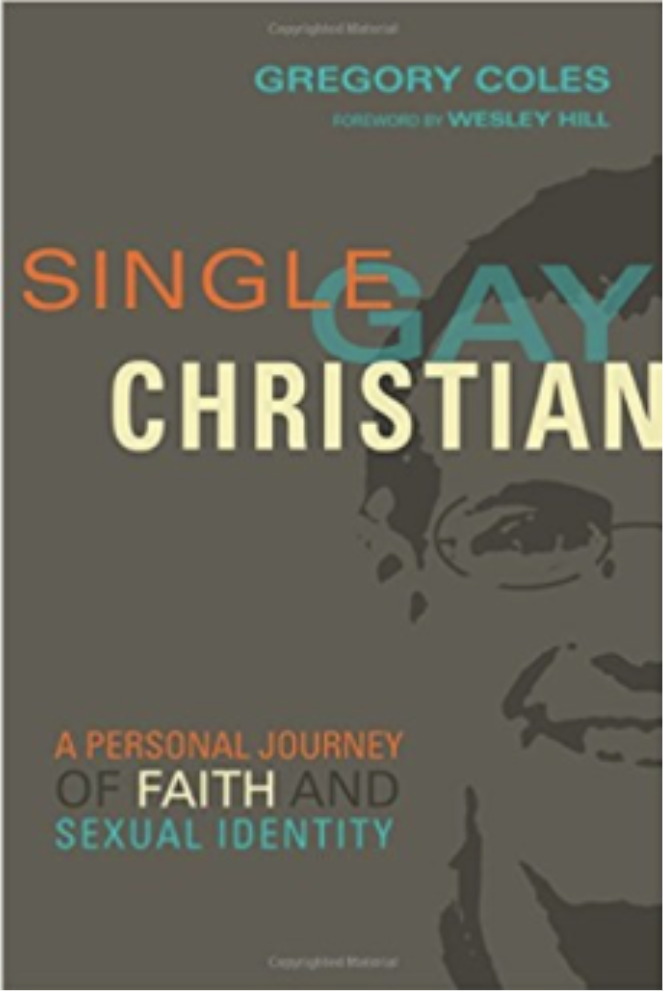 Category: Uncategorized
Genre: Damaging to LGBTQ Community
Publisher: IVP 2015
Go to this Review on Amazon & Vote “Helpful” at end of the Review

Gregory Coles, author of Single Gay Christian—A Personal Journey of Faith and Sexual Identity by Gregory Coles (IVP Books 2017), seems to be a likeable and “delightful” young man. I’ve watched several videos and read his very short book (117 pages) which tells of his journey from the beginning of his understanding about his sexual orientation to his decision to lead a celibate gay Christian life.

Coles is a good storyteller with a winsome personality and an easy writing style.

While honoring Coles’ story as his truth and the reality of where he currently is, I also am aware of hundreds of similar stories told by young gay Christians from conservative faith environments much like Coles’. These LGBTQ Christians have likewise struggled to find authenticity in their sexuality and have made life choices unlike Coles’.

Typical of LGBTQ Christians in conservative environments, Coles admits he was only shown a few options as he was wrestling through his internal turmoil of his sexuality: “I knew two kinds of gay Christians: the ones who revised the traditional interpretation of the Bible’s stance on homosexual behavior in order to pursue committed same-sex relationships, and the ones who repented after years of promiscuity and became straight—the ‘ex-gays.” Neither category included me, I was, as far as I knew, alone.” (p. 24)

Coles opted for another way to live as a gay Christian, and writes: “Instead of praying to like women and to stop liking men, I prayed for joy. I prayed for contentment. I plunged myself so deeply into ministry opportunities, into biblical study, into the lives of others, that I almost managed to forget myself entirely.” (p. 16) While this can appear an altruistic, sacrificial way of living for others, busyness is an oft-repeated pattern in the lives of LGBTQ Christians who do not want to deal with their sexuality. They may try to numb themselves with busyness so they don’t have to sit with the scariness of the internal questions, “Am I gay? Can I be gay and Christian? Do I need to change? Do I need to remain celibate for life? Will God love and accept me as I am? Will the people around me still love and accept me?”

The more deeply one is involved in conservative faith communities, the more uncomfortable these questions can be for both the LGBTQ believer and church leadership. But, as we allow ourselves to be informed about sexual orientation by medical professionals and listen to and really hear the stories of LGBTQ people themselves, we can expect the “traditional viewpoints” to be rightly challenged.

In the 1970s, the “traditional” belief held that gay people could change to a heterosexual orientation if they were highly motivated, submitted to God, and perhaps marry heterosexually.

Now, even in the conservative church, we have the growing witness of several gay Christian speakers and authors, Coles included, who have diligently tried to change orientation, with no success. So, we’ve moved the goalposts of behavioral expectations from orientation change to mandatory lifelong celibacy.

We can keep lugging the behavioral expectation goalposts around while using them as a barrier to inclusion for LGBTQ people who want equal access to faith, or we can get serious about doing the diligent work of studying ancient texts in ancient contexts while simultaneously allowing modern understanding of human sexuality to inform us.

Biblical authors did write negatively about same-sex behavior, that is clear. But, we need to stop being lazy in literal readings of translations with little to no foundational context of verses and cultures into which they were written.

It is essential for understanding of key verses about same-sex behavior that we comprehend the social/sexual role of women in the ancient world was far inferior to that of a man. Therefore, a man taking, or being placed in, the social/sexual role of a woman was degrading. No biblical author could have imagined a time in the future that women would rise to equal status with men, shifting radically the view of who women are in relation to men both socially and sexually.

Negatively written verses about same-sex behavior and the “traditional” stigma of men being penetrated, or used sexually, is intrinsically tied to the lower historic status of women. Female subjugation and inferiority has changed, thank goodness, but only significantly since the 1960s. And along with it, the destigmatized freedom for same-sex adults to form loving, lasting and healthy intimate relationships has evolved.

As people of faith, we can choose to get serious about studying ancient texts concerning same-sex behavior in ancient contexts, while listening to the stories and testimonies of LGBTQ Christians, and honoring input from experts on human sexuality, or we can lug around our manmade goalposts of behavioral expectation that deny LGBTQ people access and fullness in Christ.

Increasingly, more Christians are challenging what we have be told is the “truth” and finding the truth exemplified by the life of Christ, in the diligent reading and studying of the Word, and in the Christian witness of our LGBTQ siblings.

I found it quite frustrating to read Coles’ words in places. “My gay orientation was broken, yes. But so was every orientation, every human being, every facet of creation. The question wasn’t whether I was broken but whether I was willing to let my own unique brokenness tell a story of redemption.” (p. 55) And, “Living without sex is difficult. Living without intimacy is a death sentence.” (p. 80)

That anyone should believe that their natural orientation is broken is heartbreaking, and that belief serves as a death sentence to many.

Just as I did when I read Wes Hill’s “Washed and Waiting,” I felt deep sorrow for Coles.

Sloppy scriptural interpretations and literal readings of select verses keeps LGBTQ people in bondage, shame, and isolation. Though Coles may well choose to lead a celibate life and forego marriage and family while finding his sustenance in friendships, that should be his choice, not an expectation delivered as if from God or the requirement of full fellowship with Christ.

If you do read Coles’ book, make sure you also read Justin Lee’s  Torn: Rescuing the Gospel from the Gays-vs.-Christians Debate for another point of view from a gay Christian. If you want to go further, I have written a history of the cultural and religious discrimination of LGBTQ people which is helpful in placing the verses in context of understanding of human sexuality  Walking the Bridgeless Canyon: Repairing the Breach Between the Church and the LGBT Community . Next, progress on to  God and the Gay Christian: The Biblical Case in Support of Same-Sex Relationships by Matthew Vines, and if you are a Bible nerd, please pick up James Brownson’s  Bible, Gender, Sexuality: Reframing the Church’s Debate on Same-Sex Relationships .

If you are Christian and gay, be well informed as you make significant and restrictive life choices. If you are not LGBTQ, please be diligent in study before you insist upon imposing a life upon another person that you are not willing to live yourself.