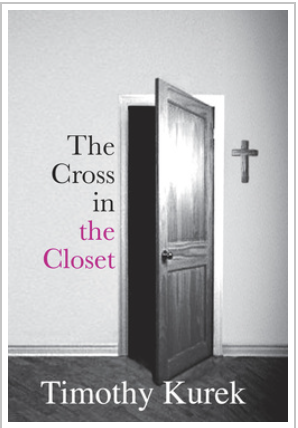 “The Cross in the Closet”by TImothy Kurek (2012) COMPLETE review Timothy Kurek exhibits fine story telling in his new book The Cross in the Closet. It is admirable that a young straight man would undertake a radical experiment to confront his own homophobia by “coming out” as gay. It takes courage to be willing to be wrong, especially about theological or social issues; I know this from my own advocacy work.

I can echo many of the wonderful comments about The Cross in the Closet, but one section was quite troubling for me. The chapter “angela” has the danger of reinforcing stereotypes for a group of people I dearly love and for which I advocate — the transgender community.

By his own admission, Kurek had “only ever met two transgendered people,” so his experience is quite limited. In The Cross in the Closet, Albert/Angela, a transgender person, is beautifully introduced. She has a tragic story. In the telling of the story, however, every one of the negative stereotypes and myths about transgender people as a whole is presented as part of Angela’s past.

Although the effective story telling does evoke empathy, it also unfortunately paints a picture and strongly reinforces destructive myths and stereotypes: transgender people are playing dress up; are victims of sexual abuse by the gender they are trying to “escape”; they lack strong gender models; or perhaps have gender models that are too strong.

While writing in the subsequent follow-up years to the experiment, it would have been a wise, responsible, deferential kindness for Kurek to have researched or had more interaction with the transgender community. Lacking understanding, the chapter should have been omitted entirely. Even the addition of a few informed paragraphs after Angela’s story would have been tremendously productive in dispelling strong myths and misconceptions about the transgender community.

The simplest way to describe how person with non-normative gender identity  might feel is this: the brain stamp does not match the genitalia. The brain says the person is one gender and the body presents as the other sex. There will be an internal struggle to align the two to achieve emotional health.

Many people that read The Cross in the Closet will have had little or no experience of understanding of the T part of LGBT; transgender people are a very small segment of the population, perhaps only .25 to 1%. An equally inexperienced Kurek, in recounting his experience, will be their “eyewitness”; they may see his depiction of Angela as a typical story of a transgender person. And, it is so completely atypical. Sadly, in challenging his own “homophobia,” Kurek adds to “transphobia.

When I first became and advocate for the LGBT community within the Christian church, my friend, Ed Ness, very wisely told me, “Kathy, just be with us; listen to us; learn who we are. You don’t know anything, so don’t speak for us.” And I did that, for several years. I listened and learned. I have used this same wisdom while coming to know and advocate for transgender people.

Understanding and empathizing with the transgender community can be a long journey.  Most people do not even know a transgender person. In that lack of relationship, we unfortunately default to stereotypes; and in his book, Kurek was no exception.