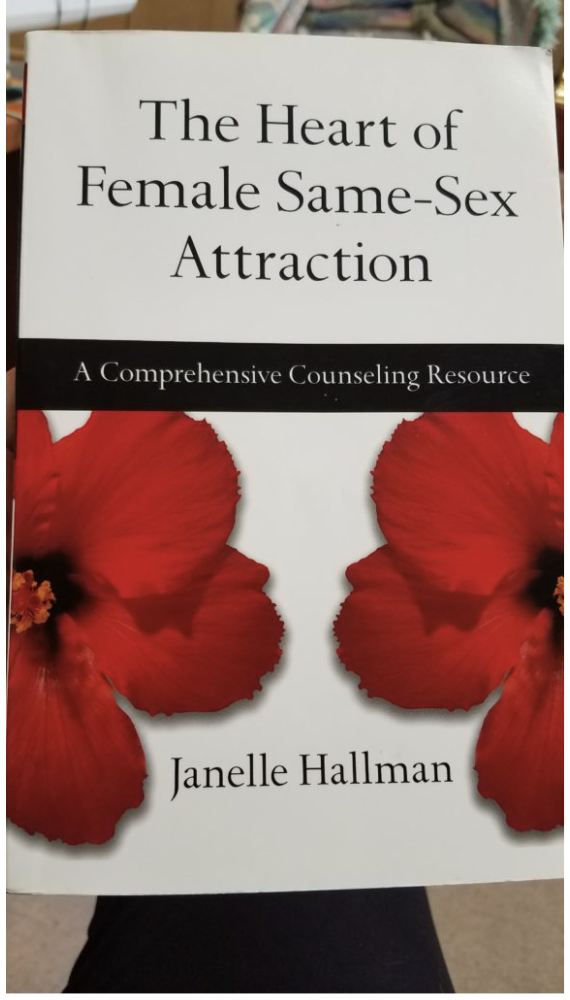 Category: Uncategorized
Genre: Damaging to LGBTQ Community
Go to this Review on Amazon & Vote “Helpful” at end of the Review

For those unfamiliar with RHN, the organization formed in 2012 in the wake of the collapse of Exodus International. With transparency and late-to-the-game integrity, Exodus leadership affirmed they had not been successful in seeing sexual orientation change in “99.9%” of the people who had participated in programs, in any of their several hundred associated ministry organizations. Still, RHN, in the failed spirit of Exodus continues to “serve(ing) those who desire to overcome sinful relational and sexual issues in their lives and those impacted by such behavior, particularly homosexuality.”

Recently, RHN produced a position paper using, in part, work and words from Hallman. So, I read the book.

It is no surprise that Hallman views homosexuality, or specifically within the scope of The Heart of Female Same-Sex Attraction, as a distortion from the normal healthy spectrum of human sexuality. Rather, it is something that needs to be fixed in order that one might become sexually and spiritually whole.

Hallman is not a casual player on the edges of therapy for lesbians. She has been a conference speaker at National Association for Research and Therapy of Homosexuality (NARTH). NARTH is well known for its support of pseudoscientific practices related to reparative therapy which is increasingly outlawed in many states.

Hallman states in the prologue to her book: “I don’t believe that homosexuality originates within this (God’s) divine design. Rather, I believe that it originated from our fall or separation from this design.” (p 11) This is the ongoing mission of her book — to address lesbianism, its causes and roots, all in hopes of bringing sexual and spiritual healing and a move from lesbianism.

The primary target market for her book is “mental health professionals, educators and pastoral-care counselors who are interested in clinical perspective on the issue (homosexuality).” (p 12) It is on this point that I will focus my review of Hallman’s work.

I have a healthy expectation that advice given to those who are responsible for the mental well-being of others would be aware of and use the latest medical findings, research, and studies.

Sadly, in the area of human sexuality, conservative Christian counselors ignore such wisdom and use the Bible as their main text for understanding human sexuality.

The Bible is not a science text, and should not be used to limit what is known about human sexuality. What we have come to understand about human sexuality in only the last century in a very skeletal way, and in the past forty years increasingly, is far beyond the boundary of the binaries of Genesis, Leviticus, Romans, Corinthians and Timothy.

These gatekeepers to the Kingdom of God consistently misinterpret the same-sex behavior of ancient cultures which were rooted in abuse, excess, lust, and the sexual use of males in encounters with great power and/or age differentials as a sexual orientation and insist that Bible authors understood what we know of today as homosexuality.

Until the turn of the 20th century, a man would be seen as a man as long as he played the male (penetrator) role in sex. Slowly, over a period of the following fifty years and due to numerous other factors (I cover this in my own well-researched book Walking the Bridgeless Canyon in chapters one through six), people attracted to the same sex in equal status, non-abusive relationships were slightly more free to express themselves and became more noticeable in the culture. It was only then that medical professionals wondered and theorized what was this new (equal status and mutual) expression of same-sex behavior.

Theorizing about the causes of same-sex attractions went through about seventy years of speculation. Was it caused by parents (smothering mother and distant father)? Or maybe one person in the same-sex relationship was actually a female on the inside, in the psyche (sexual inverts)? Or perhaps the men lacked sufficient testosterone to make them “manly”? Lots of theories surfaced.

The spectrum of causation was varied and often, completely nonsensical. With the support of absolutely no research and no comparative studies, homosexuality was seen as a mental illness from about the 1930s through the lifting of the designation by the American Psychological Association in 1973. (Chapter 2 of my book covers this thoroughly.)

As recent as the early 1970s, medical professionals as a group began to consider that those who are LGBTQ may be part of a natural spectrum of human sexuality.

Unfortunately, it did not take long for Christian conservatives to ignore the progress of professional medical understanding. They also refused to investigate the context of same-sex behavior in the Bible for what it actually was in ancient cultures — excessively lustful and sexually abusive. In culpable ignorance, they turned deaf ears to those who understood human sexuality and instead called LGBTQ people reprobate, sinful, broken, and unworthy of being Christian.

Thankfully, medical professionals, the culture in general and an increasing number of progressive Christians have consistently developed an awareness and understanding of those who are are same-sex attracted or who have gender identities outside the “norm.” We do not see LGBTQ people as reprobate, sinful, broken, and unworthy of being Christian.

Now back to Hallman’s work and book.

Biologists, physicians, and researchers in many fields have not arrived at definitive reasons as to why some people are gay, others are straight, others bisexual, pansexual, or asexual, and further, why some people are transgender. In fact, the first intentional studies on female homosexuality, as opposed to male homosexuality, began in 2009 under Dr. Lisa Diamond. We may be decades out from full knowledge of what created sexual orientation. The most likely answers will come with further investigations into fetal hormonal influences, genetics and epigenetics.

Not only do we – not yet understand fully human sexuality , comprehension was far out of reach of biblical authors who wrote in ancient cultures.

Basic understanding of human sexuality however is not beyond our modern investigation, even as a layperson.

One would need to ignore the living witness of millions of LGBTQ people in relationships, marriages, and family environments to see them as “broken” and in need of sexual orientation change. In addition to ignoring the living witness of millions of people, one would also need to ignore the progression of understanding the spectrum of human sexuality over the past fifty years.

Yet, ignoring the visible witness of people and widely accessible information from experts are what Hallman’s work rests upon.

Typically, I review books chapter by chapter. But, when the foundation is so deeply flawed, all that is built upon such a foundation is weak. Such is the case in Hallman’s “comprehensive counseling resource.”

Attached to this review, I added pictures of the references Hallman used for her book published in 2008. The resources highlighted in green are twenty years or older than the publish date. Other resources, simply circled, are between ten and nineteen years old.

Information and studies more than ten years old are deemed unacceptable as substantive in any collegiate or academic environment. Recall Hallman’s target market: “mental health professionals, educators and pastoral-care counselors who are interested in clinical perspective on the issue (homosexuality).” Surely such people would want solid information.

Hallman had to use resources that spoke to her narrative (lesbians in need of being fixed). Resources that are out-of-date, non academic, and non peer-reviewed.

These concerns ought to raise red flags about the content of The Heart of Female Same-Sex Attraction.

Hallman is currently presenting in seminars and targeting the market for counseling parents of LGBTQ people. For $499 plus transportation and hotel lodging, parents can learn how to understand their LGBTQ children and heal (whatever that means).

On Hallman’s website it states that she is “internationally recognized expert in the area of female homosexuality.” Using old non-peer reviewed information and reading Scripture out of context does not an expert make.

Readers, you get to choose how to invest your time, money and relationship with LGBTQ people. Will you walk backwards in the understanding of human sexuality with Hallman, back to the1970s and before, or will you allow yourself to perhaps be challenged and learn, and more importantly, let the lives of LGBTQ people, in particular Christians, inform you?