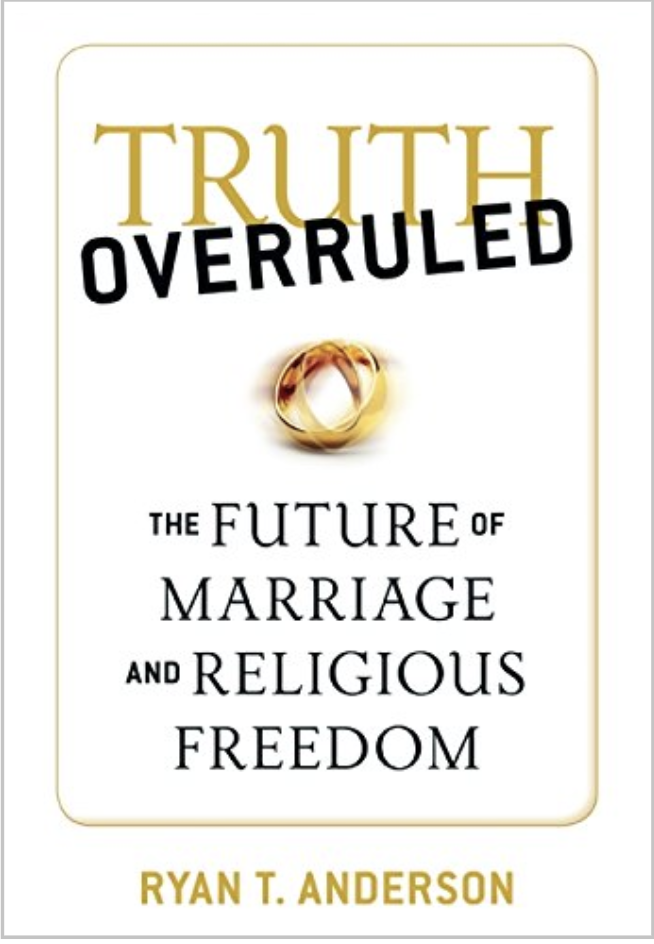 Category: Uncategorized
Genre: Damaging to LGBTQ Community
Publisher: Regnery Publishing 2015
Go to this Review on Amazon & Vote “Helpful” at end of the Review

Ryan T. Anderson’s new book Truth Overruled: The Future of Marriage and Religious Freedom uses only arguments “based in philosophy, jurisprudence, political science and social science” to investigate “what marriage is, why marriage matters for public policy, and what the consequences are of redefining marriage.”

Anderson, in constructing these “truths,” ignores the social history of marriage, elevates procreative complementarity – the notion that only a man and a woman can create a child –  as a condition of marriage, and discounts all major professional medical and psychological associations’ statements on the natural variations of sexual orientation and gender identity.

“Truth” #1: Marriage is intended as a context in which to raise children

Anderson’s “truth” of marriage as a context in which to create children may be sentimental, but taking the long view of history, it is not accurate.

Equal access to marriage by same-sex couples did not “redefine” marriage. Its definition has gradually shifted over the last five millennia, primarily in the past fifty years. Breaking with thousands of years of tradition, in the late 19th century, marriages started to be based on love and companionship. Before that, couples married for political and economic reasons.

It was heterosexual couples who significantly altered the marriage landscape with cohabitation, single parent families, and divorce.

Though procreative complementarity in the sex act is primarily a Roman Catholic doctrine, can it be adequately used to restrict marriage to one man and one woman?

According to the Center for Disease Control, 6 percent of women aged 15 to 44 are deemed infertile, additionally, 12 percent have problems getting or carrying pregnancies to term. Add to that, 7.5 percent of men suffer infertility problems. These levels of infertile heterosexuals exceed the percentage of LGBT people in the US population. If naturally occurring infertile heterosexual couples get a pass on procreative complementarity, can we then bar access to infertile same-sex couples?

Anderson asserts that any sexual attraction other than heterosexual attraction, or non-cisgender identity, is both a behavior and changeable. He ignores all major professional medical and psychological associations’ statements on these issues.

Prosecution for breaking discrimination laws is not religious persecution. Anderson fails to inform his readers that religious freedom is the liberty to worship according to your beliefs, to attend a faith community of your choice, and having the right to share your beliefs.

The freedom to practice one’s faith does not include asserting ideologies that inherently deny the civil rights of other citizens.

Let’s move on to public discourse based in truth, not ideology

Anderson and his fans may enjoy deliberating marriage equality, but while the cases challenging marriage bans travelled through local courts, district courts, and finally to the Supreme Court, each of Anderson’s ideologies, his “truths,” were carefully examined. They’ve already been found lacking and certainly less compelling than the need to expand marriage rights to roughly 10 million Americans.

As Americans, we will find our way through this important discourse, hopefully with mutual respect. The public conversation requires wrestling with real truths. The easily deconstructed personal ideology presented in Truth Overruled is devoid of knowledge of social history and science and serves to slow the progress towards balancing and honoring both civil rights and religious freedom.
___________________________

I have studied this issue in depth and dedicated two years to research and write a history of the cultural and religious discrimination against the LGBT community in the US. I DO use social history, science, and the Bible. This is why I find Anderson’s work so woefully neglectful of actually history and truth. Give my information a read, and if you have KindlePrime, it is free. Educate yourself with truth rather than ideology thinly veiled in theology severely distorted history. Read “Walking the Bridgeless Canyon.”