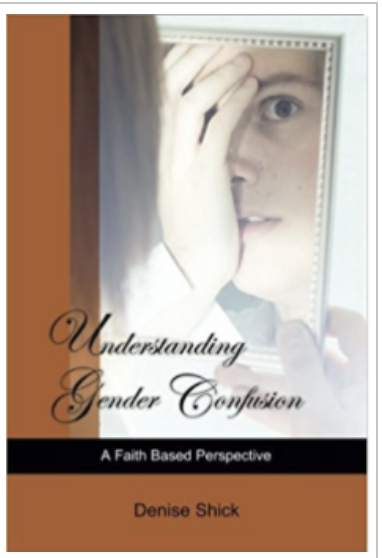 Category: Uncategorized
Genre: Anti-Trans by Christian Authors
Publisher: Create Space 2014
Go to this Review on Amazon & Vote “Helpful” at end of the Review

When I read information about sexual orientation and gender identity issues, the context of time is an ESSENTIAL piece of the communication. This element is sadly left out of Shick’s writing. I had to do the math — she is about 46. When she was 9, her father tranistioned. That would have been around 1977. This IS a key piece of information conveniently omitted.

The culture in which Shick’s father came out was extremely naive by our standards. Cross-dressers and transgender people were regularly mistaken in common language. There would have been very little, if any, readily available resources for him to try to understand what was going on. Hey, maybe he was a cross-dresser and NOT transgender?

The book narrative does not help us with any timelines in which we might assess the issue. Again, this is a MAJOR flaw. Three decades of understanding do matter. Shick leads us to mix up timelines of her father’s issues and those who desire today to identify in a gender not associated with their birth sex.

The opening statement of chapter one which wholly dismisses any human sexuality studies as by “Dr. Kinsey and some followers” is incredibly naive. The ENTIRE basis of establishing homosexuality as a mental illness was done without any, as in NONE, research. It was based on opinions and observation of a VERY small subset of homosexuals in therapy with NO comparison to gays NOT in therapy. Once REAL research started on human sexuality, the house of cards constructed by the psychoanalysts of the 1940s and 1950s took a FAST tumble.

Shick makes the common error of stating that homosexuality was removed from the DSM through pressure. Read chapters 2 through 4 of my book “Walking the Bridgeless Canyon” for accuracy of the events. My book is footnoted, historically accurate and well-researched rather than simply repeated lore.

This statement seems quite logical to me: Gender roles to be God-ordained, it would seem, would need to be strictly defined throughout history and cultures. They are clearly not. Who is to decide what is acceptable to be masculine enough or feminine enough to meet Shick’s standards and stay within her boundaries?

Only Christians who do not wish to delve into the biology and science of human sexuality and gender identity would dare to call transgenderism a spiritual “stronghold.”

We would not think of ignoring scientific and medical advancements in our use of technology, assessment of cancer, or even growing crops. Yet, the same devotees of modern progress, ignore what is known about human sexuality and gender identity while holding tightly to Bible verses written IN and TO a culture over two millennia old.

The constant conflation of transgender people with cross-dressers, whether the reference point be the Bible or a testimony is SLOPPY, SLOPPY and uninformed.

Lastly, the book is in need of editing to correct grammar, typos and typesetting. I know the effort and input that requires having gone through the tedious process. If this is the best that the anti-trans Christian community (I have seen Restored Hope, Brown and others push this out as a “must read”) has to offer as a compelling book, this is a very weak counter to REAL science and well written books.

I published a free, downloadable and sharable chapter entitled: The Myth of a Pink and Blue World: Sex, Gender and Sexual Orientation” from my book. If you would like another Christian perspective of those issues that also honors Scripture, it is easily findable on my blog. (Not allowed to link it here per Amazon guideline.)

Skip this book and invest an hour in facts not fiction.