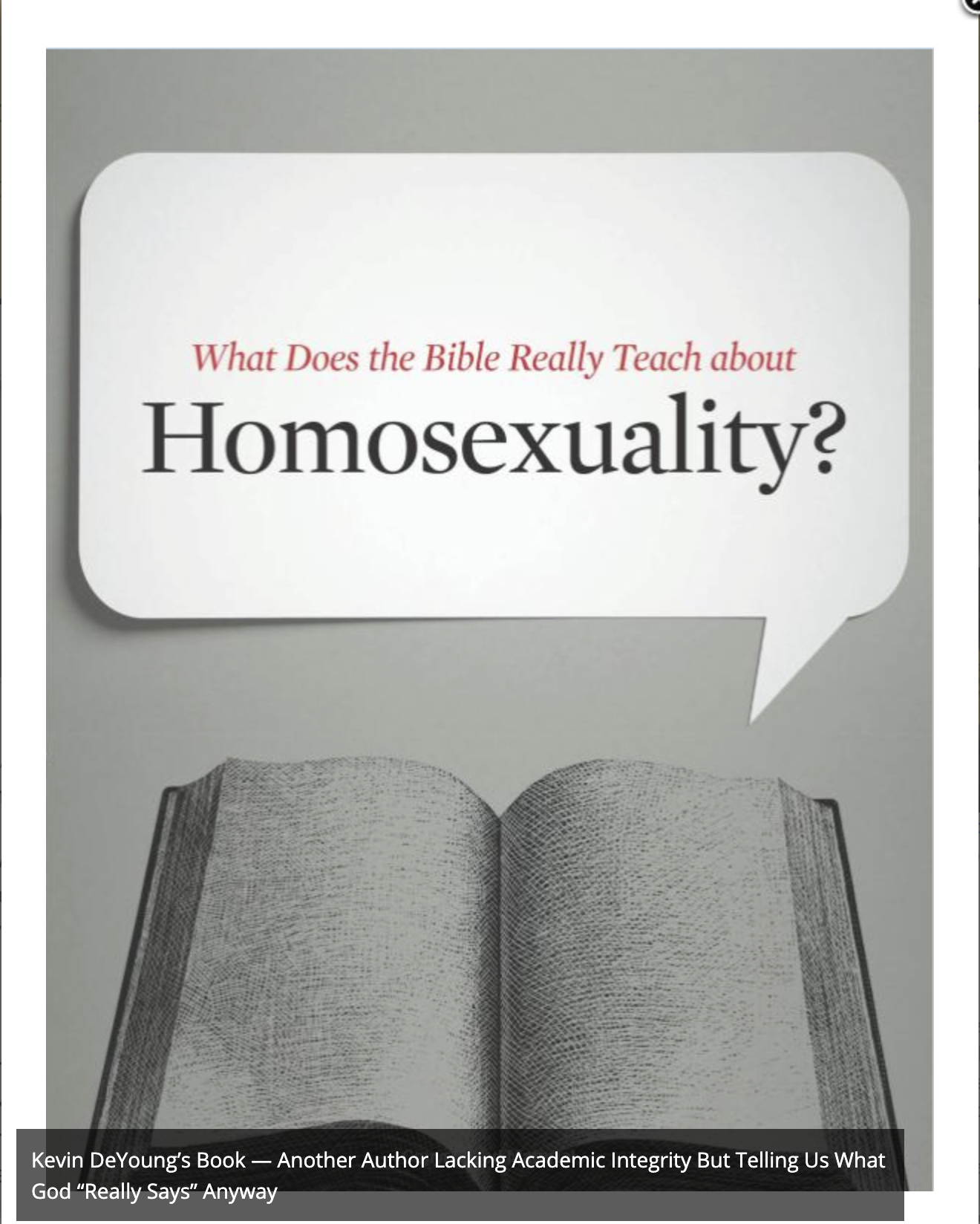 Category: Uncategorized
Genre: Damaging to LGBTQ Community
Publisher: Crossway 2015
Go to this Review on Amazon & Vote “Helpful” at end of the Review

Kevin DeYoung’s What Does the Bible Really Teach About Homosexuality? offers yet another utterly maddening viewpoint of “God’s truth” about gay people.

I’ve read the bulk of such books written over the past few decades, beginning with the first “gays are out to destroy America” book written for the evangelical community by Tim LaHaye in 1978: “The Unhappy Gays.”

Once the new genre started, it triggered an onslaught. Next came the religious-political books from authors like Falwell and Dannemeyer in the 80s. In the 90s, came a deluge of we-are-no-longer-gay books by Chambers, Dallas, Jernigan, et al. I have slogged through most of them, including the “truths” built upon assumptions tome by the contemptuous anti-gay theologian Gagnon. I’ve endured the lunacy of Lively and even tried to find a pastoral heart in Hubbard and McDowell’s writings. To my great disappointment, they too failed. I’ve stomached Brown’s fringe venom poorly cloaked as compassion, and been left nonplussed by the shallow philosophical-political arguments of Anderson and Satinover.

All of these books, with DeYoung’s latest entry as no exception, ignore a simple foundational truth. What is referred to in the Bible in each of the passages used to bolster the avalanche of modern anti-gay ideological writing is not homosexuality. What is depicted and examined are violent, abusive, lust-filled, same-sex behaviors performed no less than two millennia ago in cultures where the social and sexual status of men and women were entirely different from what we have known in the past 60 to 70 years.

All of these authors (each white, heterosexual, conservative Christian men, by the way) basetheir entire ideological theology upon the foundational presumption that people have historically participated in same-sex relationships with some semblance to the relational structure we see today.

Until the beginning of the 20th century, gay relationships — as we now them now: equal status and mutually attracted — were virtually unknown in any previous culture.

The perception and cultural response to same-sex behavior between males has intractable roots in the social and sexual status of women throughout history. Because same-sex acts placed one male in the submissive, penetrated role of a woman, one male was invariably looked upon as if he were a woman.

Until women began to gain minimal upward status in the late 19th century, for a man to be treated sexually as a woman was both shaming and humiliating.

Before about the early 1900s, the sexual interaction between men and younger men or older boys included significant power differentials. The younger, submissive partner took the sexual-social role of a woman – again, a demeaning position for any male throughout history.

It was only as recent as 1879 that Karl Kertbeny first noticed there were men of equal status who were mutually attracted to one another. This newly witnessed notion made slow inroads to American culture. In fact, it was first mentioned in a medical journal in 1911. Before that, if a man was attracted to a male, all was fine in man-land as long as he maintained the dominant role of penetrator.

Until this period, people were defined by the role they played in sex, not by the sex of the person to whom they were attracted.

This monumental shift of identifying the sexual roles of people at the start of the 20th century started the transformation of how same-sex relationships came to be viewed.

As women rose in status, as cities formed, and as men began to explore sexual attractions, the interaction, which had always been associated with excess, lust and the reduction of one partner to the role of a woman, came to be seen differently.

The dynamic began to change in the 1920s; it would have been the first time in history that there was a minimal cultural understanding that people of the same sex were mutually and equally attracted.

The word “homosexual” first appeared in an English translation of the Bible in 1946. No theological documents at the time support this shift. This was clearly a cultural response to the most perverted sexual act translators could imagine to insert in the New Testament passages.

In fact, Derrick Sherwin Bailey, an English Anglican theologian, wrote Homosexuality and Western Traditions (1955) in which he closely examined the cultural and legal response to gays. Together with a team of theologians, historians, anthropologists, lawyers, and legislative leaders to study homosexuality and the sodomy laws, Bailey produced a groundbreaking work that should have been the primer for all theological writers after him. But, it was ignored.

The conservative American church and authors had been so unconcerned about gays that no one bothered to write a book addressing this most “abominable sin” until LaHaye’s The Unhappy Gays in1978.

Gays, while certainly scorned in the culture from the 1930s (see my Chapter 3), were ignored for the most part in Christian writings.

As gays were finally rising out from under cultural and medical oppression in the early 1970s, unfortunately, the conservative religious and political groups merged right around that time in the late 1970s. A smattering from within the unholy alliance saw the polarizing potential the “abominable gays” could have on amassing unregistered and uninvolved conservative voters. (I address this transition period in Chapters 5 and 6 of my book, Walking the Bridgeless Canyon.)

And thus the deluge of modern negative conservative writings on homosexuality and faith, followed by gender identity and faith started.

That was a quick overview of modern events.

There is no possibility that Apostle Paul, or the author of Leviticus, or Deuteronomy, could have had an inkling that over time, with the radical shift in views of women as equals and other social and cultural modifications, people could possibly engage in same-sex sex as a natural, healthy expression of love and mutual attraction. Additionally, the concept of gender identity could not have been more remote in ancient cultures.

The same-sexual behavior that biblical authors wrote about was the outcome of violence (Genesis), power dominance and social-sexual dominance (Leviticus and Deuteronomy), and lust and lack of self-control (Romans, 1 Corinthians, and 1 Timothy).

The prerequisite of every single anti-gay Christian author, including DeYoung, who presumes to interpret six Bible passages as what God “really says,“ or “really teaches” about gay and transgender people is that readers must fully ignore social and medical histories of how we have come to understand the role of women and the progression of human sexuality.

Those are some darn big oversights we need to participate in to agree with their findings!

Every professional medical and mental health organization in the U.S. asserts that homosexuality is a normal variation of human sexuality, though certainly less prevalent than heterosexuality, still, it is a normal, expected variation. These organizations also all agree that attempting to change a person’s natural orientation is damaging.

How can any truth, especially one presumed from God Himself, come out of such severely flawed foundational presumptions?

Christians don’t bind our treatment of women and slaves to words written thousands of years ago. We have allowed time, cultural shifts, science, and even the witness of women and people of color to inform our more egalitarian modern stances.

Yet somehow many conservatives have not allowed this same process to guide them when forming a set of sexual ethics specifically for LGBT people.

We are in a new place in history and understanding and are being asked to wrestle with concepts that have emerged over the last half-century, concepts our forefathers in the faith never could have imagined.

I did finish reading DeYoung’s What Does the Bible Really Teach About Homosexuality?, but by page 52 my highlighting marks and margin notes were becoming too annoyingly frequent. It’s difficult to address arguments reasonably which are so foundationally flawed. All of DeYoung’s presumptions of “God really says” or “really means” about homosexuality simply have no standing in historical accuracy.

I have a lot more than 40 questions for DeYoung and gang, but I will start with these.

How is it possible to intellectually engage yet another book that thoroughly ignores the historical space and progression in between what was written thousands of years ago to and in a specific culture and what we know today?

If an author refuses to address the subject of the intersection of faith with sexual orientation and gender identity with academic integrity including acknowledging: the cultural shifts in the status of women, the progression of understanding and input from experts in human sexuality, the merger of conservative politics and religion since the late 1970s with its destructive impact, each significantly influencing the ability to take an honest look at biblical translations, then why should we listen to them?

This sort of flimsy ideologically-infused theology created over the past 45 years is myopic, shallow, and destructive to LGBT people, their families, those that love them, and the church itself.

Though I am not a theologian or a historian, I did do broad and extensive research to try to understand how this whole mess got so tangled up. Having done that work, how could I possibly respect such superficial input and allow it to dictate my treatment or interaction with my gay, lesbian, bisexual or transgender brothers and sisters in Christ?

More importantly, such anti-gay “truth” about what God “really” had in mind is contrary to the witness I see in the lives of thousands of LGBT Christians.

DeYoung does what all those before him (since 1978), and Lord help us, those coming after for another decade or so will do. Lacking the influence of solid historical, cultural and medical research in their work, they impose presumptions on biblical texts to arrive at what God “really says,“ or “really teaches.” DeYoung thus joins fellow condemners in constructing a wall blocking LGBT Christians from full inclusion.

When I investigated the Bible, and allowed my understanding to be informed by history, medicine, science, and the powerful witness of LGBT Christians themselves, I arrived at a fully affirming decision for Christian inclusion.

LORD, let this ignorance end for the sake of Your Kingdom.