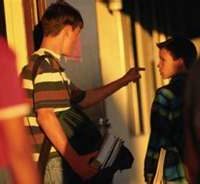 Casey, sixteen and gay, was being bullied by two students at his high school in Ohio. His youth pastor, a friend of mine, helped to secure a restraining order to protect him, but the principal downgraded the severity with a weaker solution.  He let Casey come to the office five minutes before classes ended and stay until five minutes after they started; Casey would then be safe from bullying in the hall-passing time.  One of Casey’s bullies was still in class with him.  Did this principal create a safe learning environment and protect Casey from abuse?  Why did it even get this far?  Why was there no policy in place to protect this child from bullying due to his sexual orientation or even his perceived sexual orientation?

No gay, lesbian, bisexual or transgender (glbt) child in public schools in the United States is federally protected from bullying and harassment for their sexual orientation or gender identity. Shocked?  This is true.  No Child Left Behind (2001), soon to be re-authorized after ten years in the updated Elementary and Secondary Education Re-Authorization 2011 (ESEA), made it out of committee in October 2011 without the bipartisan support it needed to include protection for glbt students.   Currently, students are protected from bullying for: race, sex, religion, disabilities and national origin, but not sexual orientation and gender identity.

When the ESEA is brought to the floor of the Senate in either December or January, there is a push to attach the Student Non-Discrimination Act HR 4350 (SNDA) to it. SNDA includes comprehensive federal prohibitions against discrimination in public schools based on actual or perceived sexual orientation or gender identity.  It would forbid schools with public funding to discriminate against glbt students or ignore harassing behaviors.

The bill was re-introduced, having not been added in committee in ESEA, by Sen. Al Franken (D-MN) and Rep. Jared Polis (D-CO). (watch the video, grab a tissue.)  Co-sponsored by 34 senators, it needs the approval of 60 senators to attach it to the ESEA before going to the House for a vote before it becomes law.

Knowing that the primary socializing institutions for children and youth are families, schools and faith communities, should we not try to make those places safer for children?  This is not just a “family issue” forglbt youth.  Many of them are not even out in their own families.  As mysterious as that may seem, the biggest loss a child fears is family rejection so many will delay coming out to their own parents.  Churches are wellknown sources of anti-gay rhetoric, leaving many children thinking they have only one protected place: school.

Now is the time to voice to your senators and representative  that it is their duty as public servants to serve the most vulnerable of their constituents: glbt children.  Tell them to get on record now in support of the Senate bill and the version that comes to the House.  Any senator or representative that votes against the protection of vulnerable children should not hold that position of trust.

I am a Mom too, with two straight, adult children.  I am a straight, Evangelical Christian compelled by my faith to stand for justice and against oppression.  The argument of some conservative family groups and lobbies against this bill is the fear that this bill will “victimize people of faith by turning religiously-based, anti-gay comments into ‘thought crimes’ ” (Rep. John Kline R-MN).  This is fear-based rhetoric.  Anti-discrimination laws punish actions, not opinions or beliefs.

Who should care and act on this now:

Bottom line: who should care that the Student Non-Discrimination Act (SNDA) be voted into law as part of the Elementary and Secondary Education Re-Authorization Act (ESEA)?  All of us. Partisan politics drives me crazy.  When I see a vote that goes right down party lines, I know the public servants are voting to maintain power and money balances and have succumb to party/special interest groups pressure.  Voting for the protection of children is not a partisan issue.  Every public servant in this country should be protecting the least of these.

And what has become of Casey? Along with his youth pastor, PFLAG stepped in to protect this child. The school administration knows they are being watched and are more cautious. This is what ESEA will do for all children and in all schools; it will strengthen the federal law to include the protection glbt students against bullying.  And, after five years of blocking a Gay Student  Alliance (GSA), Casey’s school now has one and he is the president. He is safer.

Apply pressure and make your voice heard now.  There are 90 million children in this country under 18 years of age, including approximately 4.5 million that are glbt.  Speak up for their safety and insist that the non-inclusion of SNDA at the committee level be corrected when ESEA comes to Senate vote in December or January.  Insist and speak up for Casey and other glbt students.

Contact your senators and representatives and tell them that it is essential that the SNDA (HR 4350) become part of ESEA when it comes for vote in the Senate in December or January.  It will expand the protection from bullying based on: religion, sex, national origin and disabilities to include protection for sexual orientation and gender identity for glbt students. And stay on them, especially the Republicans who may be resistant to approve it. And big kudos to Al Franken, thank him too.

SAMPLE LETTER using the links above to find your senators and representatives:

It’s essential that the Student Non Discrimination Act ( SNDA HR 4350) become part of Elementary and Secondary Education re-Authorization Act (ESEA) when it comes for vote in the Senate in December or January. It will expand the protection from bullying based on: religion, sex, national origin and disabilities to include protection for sexual orientation and gender identity for glbt students. It would be a great sign of initial support for you to also co-sponsor this bill before it gets to the floor. The protection of our children should never be a partisan decision.

Thank you for VOTING TO PROTECT ALL STUDENTS FROM BULLYING.

Listening to Michael Brown and Scott Lively | Where Do You Fit in the Dialogue?
Sexual Orientation and Science | Hands