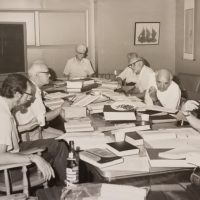 To subscribe for monthly updates and excepts, email: Newsletter@canyonwalkerconnections.com

Members of the RSV translation team

If you’ve been following the journey of discovery to find out why the translation team of the 1946 Revised Standard Version of the Bible made the decision to translate two Greek words to one word, “homosexual,” each newsletter will bring you updated monthly progress reports, or perhaps bits of interesting information from the book as we write it.

Following is an abbreviated excerpt from the book (“Forging a Sacred Weapon: How the Bible became Anti-Gay”- working title, planned for January 2020 release). What follows is an account of the morning we found the writer of the 1959 letter who had challenged the RSV team’s decision to insert the word “homosexual” in the Bible for the first time.

“On Thursday, August 16, 2018, Rev. David was lying in bed at 9 am thinking about getting up, yet enjoying the pleasures of being able to lounge in. The phone on the side of his bed rang, and he answered it. 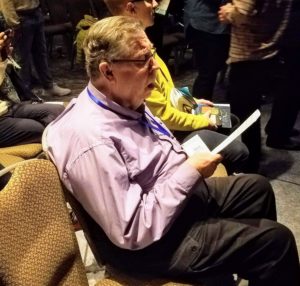 Just a few hours before at 7 am, I had woken up to an email from Tina (who had been working on finding the author of the letter we had found) titled “I may have found him!” Ever since finding the series of letter exchanges in September 2017 at the Yale University Archives, Ed and I had wondered who the mysterious “young seminarian” might be.

We had already satisfactorily answered the question we went to Yale to ask; that simple question was “Why did the team make the decision to use the word ‘homosexual” in I Corinthians 6: 9-10?” Then, we got curious. Who was this “young seminarian” whose letter exchange with Dr. Weigle created the only historical record as to why the RSV team decided to translate two Greek words to “homosexual.”

Tina’s email was the beginning of the end of the quest to find David. She wrote, “So, I’m not 100% sure on this, but I think I might have found him,” she continued to describe the skeletal outline of how the jumbled seemingly dead-end pieces had suddenly come together. What we did not previously know is that David had only used his first and middle names to write the historic letters in 1959.

I was amazed; I now had David’s real name, his address, and his phone number. At 9 am, I dialed the

number Tina had given me.

“Hello, my name is Kathy Baldock, and I live in Reno, Nevada. I’ve written one book on the history of LGBTQ discrimination by society and in the church and I am researching for another one. In 1946, the word ‘homosexual’ was first introduced to the Bible in the Revised Standard Version in the New Testament. It remained in the I Corinthians 6: 9-10 passage again in the full RSV that was printed in 1952. I’ve long wondered why this happened. Why did two Greek words get combined and translated as ‘homosexual’?

I teach frequently from my book and when I get to this part of the story, I say, ‘The translation team made this decision. I believe in the context of time and the years the team members were born, they didn’t know much about human sexuality, so I assume their decision was ideological and cultural, but not theological.’ There simply was no theology about sexual orientation at the time. After listening to my workshop twice, a gay man named Ed who lives in the Los Angeles area also became curious as to why the translation team made that decision. So, he began collecting old Bibles, lexicons, and dictionaries to trace the history of the translation of I Corinthians.

In July of last year, he called me to tell me had found out that the translation notes for the RSV were housed at the Yale University Archives. He asked me if I would like to take a field trip to Yale to go dig into those notes. He didn’t even finish his question and I was a solid, ‘Yes!’ Well, we went to Yale.”

David often interjected, “Oh, yes,” or “Why, yes.” At least I knew he was still with me. I thought I might need to remind him of the circumstances of the letters if indeed he had written them. I continued, “Well, Ed got curious too and began to also wonder why the translation team made that decision.”

“In late September last year, we spent five days at Yale looking for evidence as to why the team made that decision. We looked at over sixty-thousand sheets of papers and documents from boxes and microfilms. Amongst them, we found an exchange of four letters written in 1959. These letters are the only documents that prove my theory about the translation being ideological and cultural, and not theological.” I took a long breath before asking the most important question. “The letters were written by a young seminarian named David ___, are you the David ___ who wrote those letters?” 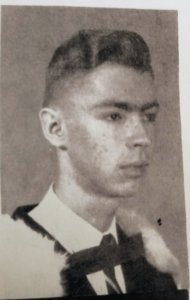 In those few moments that David listened to me, it all came back and, for him, it seemed as if only seconds had passed since he was a twenty-one-year-old seminarian who had had an exchange of letters with Dr. Luther Weigle, the head of the RSV translation. My call to David was the last thing he expected that August morning. He was sure his old letters would “end up in the trash bin.”

He had been long convinced that “hundreds, if not thousands” of people would have written similar letters. He responded to me, “Why, yes, I did write that letter to Dr. Luther Weigle when I was in my first year at McGill University in Divinity School.”

Has “Homosexual” always been in the Bible?

Forging a Sacred Weapon: How the Bible became Anti-Gay

And HERE is my first book. “Walking the Bridgeless Canyon: Repairing the Breach between the Church and the LGBT Community.” It is an EXCELLENT place to start so that you are ready for the next book.
Tweet