Walking the Bridgeless Canyon: A Discussion Guide for Personal, Group & Bible Study Use was created by a team that reviewed the manuscript to ensure the discussion questions and text were accessible, gracious, and moved people along understanding with a good balance of push and kindness.

The Guide will also be a great tool for those who are already affirming. But the ultimate market is Christians who are undecided and/or uneducated about sexual orientation and gender identity at the intersection of faith.

If you want to read through the Foreword so that you can get a feel for the tone of the guide, you can read that here: WTBC Study Guide Foreword. 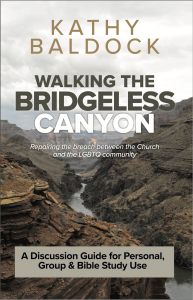 WEEK ONE:  Opening thoughts and discussion questions–Using the discussion guide, gathering as a group, or not.

WEEK TWO:  Early understanding of same-sex behavior and gays in the American culture until the 1960s–The beginnings of psychotherapy on homosexuality in America, gay Americans in the culture from the 1940s through the 1970s.

WEEK THREE:  Moving toward social, medical, cultural, governmental, and legal freedom, then into religious oppression–The roots of Fundamentalism and the merger of conservative religion and politics.

WEEK FOUR:  The origin and politics of HIV/AIDS and sex, gender, and sexual orientation

The nine-session study can be done alone or in a group.  I strongly suggest that LGBT people, or parents of LGBT children, should be included for a broader perspective. Relationship and education — my mantra.

The first week is an introductory meeting, preferably meeting over a meal while discussing five questions. Each session, participants are assigned between 25-80 pages of reading from Walking the Bridgeless Canyon. The corresponding section of the Discussion Guide includes a five to six-page summary of the reading, and on average, nine related questions. Participants should plan on each session lasting one and a half hours.

Anyone can lead the study. Just make space available and follow the guide. Though the material is challenging, often quite challenging, the structure is done for you.

I suggest the last session as another meal and discussion meeting.