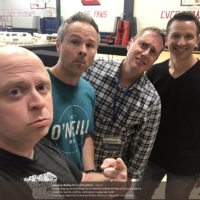 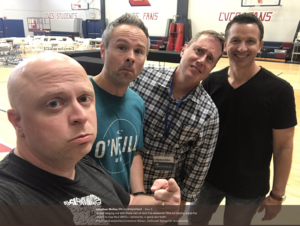 The Anchored Leadership Conference took place on Friday and Saturday, November 2-3, 2018. The stated intent of the gathering targeted at youth and ministry leaders was the “Equipping (of) church leaders to reach a sexually ‘fluid’ generation with grace and truth in an ‘everything’s okay’ world.” The main speakers were Jonathan McKee (The Source for Youth Ministry), Caleb Kaltenbach (pastor and author), Sean McDowell (speaker, teacher, and author), and Greg Stier (Dare 2 Share Ministries). 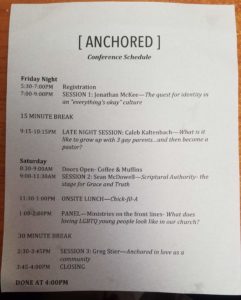 I attended to learn first hand how leaders in youth ministries advise others to respond when LGBTQ youth in churches come out to them, or when speaking of sexual orientation and gender identity issues in youth groups and conferences. I interacted with each of the main speakers and most of the panel members while at the conference. All of the main speakers were aware of my presence and of the work I do. While I took many pages of notes, I did not ask any questions publicly. I just wanted to listen.

I followed up with all four main speakers in emails one week after the conference. All the statements I refer to in my letters were spoken publicly. The exception were some comments from time I spent over lunch at a communal table with Jonathan McKee. I have redacted a section of my letter to him for privacy reasons.

I’m making my comments to each of them public one week after sending out the individual emails.

Perhaps my written objections may help others better listen to what is being spoken/not spoken, and then to assess what they hear. Maybe the letters may help model how objections might be offered in a civil tone.

Two of my letters to the presenters are quite long. One of those letters was written to Jonathan McKee who included as part of his presentation that he is the father of a transgender child (male to female). McKee misgendered his daughter throughout the talk. This was the focus of my letter to him.

Caleb Kaltenbach seems to have become more gracious since I read and reviewed his book, Messy Grace.

The conference team seemed to look to Sean McDowell as the theology expert on sex and gender. My letter to McDowell is quite long. In that letter, I emphasis context and the progression of understanding human sexuality over time as well as the radically changing roles of men and women.

The letter to Greg Stier is quite short. His talk seemed oddly adapted from his standard fare at youth conferences and lacked action points, especially as one might expect from the closing speaker to the two-day conference.