The documentary Pray Away will premiere in 190 countries and 37 languages on Netflix on August 3rd. Former leaders of the you-can't-be-gay-and-still-be-acceptable-to- 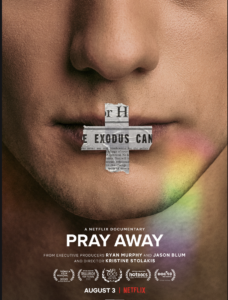 God movement tell stories of their involvement in various ministries and their subsequent remorse and trauma, experienced and inflicted upon others.

Pray Away will be seen by millions of people worldwide and it will surely have impact and raise questions about how LGBTQ people are viewed and treated in the majority of conservative Christian churches.

People who may have believed there is benefit in seeking help to keep a lid on their orientation, or parents, who, in wanting "the best" for their LGBTQI children, may indeed take wise and needed pause after seeing the film. They will hear the words and stories of former leaders and insiders. They may, for the first time, understand the trauma don't-be-gay or don't-identity-as-gay ministries cause.

Though I have seen the documentary already (and it is excellent and a MUST SEE), only a 2:48 minute trailer has been released publicly.

Already, there is pushback from those who support ideologies and theology teaching that LGBTQI people who refuse to deny their natural orientation and gender identity cannot be Christian. Pray Away exposes the work and threatens the ongoing success of such Christian ministries which seek to change, stigmatize, and exclude LGBTQ people.

Christopher Yuan is amongst those whose ministry, message, and money may be threatened.

Yuan is getting out in front of it. Having seen only the short trailer, he appeared on The Steve Noble Show on July 14th to talk about the film. 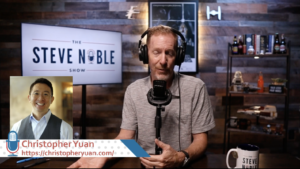 After mocking the Presbyterian Church USA as not "a true church ," (00:43, PCUSA has over 9K congregations and 1.3M members), Yuan commented on the upcoming documentary. "I knew everyone of those people that was interviewed and I knew them before their deconversion." (00:34) [I do not know if "deconversion" is a recognized term or what it means. I am guessing it means going back to LGBTQI after identifying as ex-gay.]

This statement sets Yuan up as an authority on the spiritual and sexual journey of the film's participants. Yuan invites us into his place of informed insights. We are to believe he knew each of them and their character before they left the "ex-gay movement." He can witness to us of their spiritual demise after "deconversion." Yuan is the great Eye in the Sky who wants us to dismiss the stories of former leaders given his insider's "see how far they have fallen" perspective.

Like every person, Yuan gets to have his opinions, his theology, and make his living, but he really needs to stop lying.

This is not my first rodeo with Yuan.

He has tried in the past to shut down my reviews of his books. (If you want an overview of that story, his teachings and books, here are my reviews of Holy Sexuality  and Out of a Far Country)

As I listened to the interview, I knew Yuan's claim positioning himself as "the authority" was a lie.

Yvette Cantu Schneider is in the film. She worked as a policy analyst for the conservative think tank Family Research Council in Washington, D.C. She met with national

legislators weekly, spoke at hearings at both the national and state levels, wrote position papers and articles, and appeared on every major news channel, as well as speaking at Focus on the Family’s original Love Won Out conferences and was the first and only Director of Women’s Ministry for Exodus International before its closure in 2012.

Yvette is also one of my closest friends. We talk and text daily, and we hike together for hours every week. I asked her if she ever met with Yuan in her previous work, "No, I never heard of him until you told me about him when you were reviewing his books. Once again, he's lying."

Next, I checked with Michael Bussee, one of the founders of Exodus. Micheal responded, "Christopher Yuan claims he knew me before my 'deconversion.' This is a complete falsehood. I left the ex-gay movement in 1979. I don't know him and have never met him."

Next up, John Paulk, founder and leader of Love Won Out, a ministry of Focus on the Family.

"Do you know Christopher Yuan? His response, "No. Who's he?"

Yuan must have missed the good news that Thomas is doing well and thriving since renouncing his past work. I asked

Randy what he would want Yuan to know about his current life. "Faith has always meant to be alive, grow, evolve, and mature. Since coming back out that's exactly what my faith in Jesus has done, causing my family and me to thrive. This fall, when I marry the love of my life, Dan, I know it is the result of our Good Shepherd's leading; that He has and will continue to bless our Union in Him." 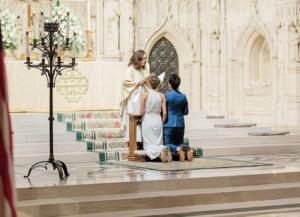 When Yuan watches the full documentary, he will also see that Julie Rodgers, former spokesperson/poster young adult for the "ex-gay" movement with Exodus, is very happily married to her wife and living in DC. Along with millions of watchers, he will see their beautiful wedding witnessed by hundreds of friends. He may also come to know that while Julie was a leader and speaker, she was living an inner tortured life and doing self harm. As with all the other former leaders, she is now thriving in her honesty.

We can squabble about good and accurate translations of verses so often used against LGBTQ Christians from 1 Corinthians 6: 9-11. (I am a bit of an expert of this).  We tend to focus on doers of sexual sins mentioned, but overlook some of the other sinners listed amongst those who "will not inherit the Kingdom of God." Included on the Corinthians list are "slanderers."

Unrepentant slanderers, those who lie about others, will not inherit the Kingdom. As I mentioned, this is not my first rodeo with Yuan's deception.

Yuan gets to have his opinions, his theology, and make a living from his ministry, but he really needs to stop lying.

The participants of Pray Away: Bussee, Paulk, Thomas, Rodgers, and Schneider are not lying in Pray Away.

They reveal dangerous and uncomfortable truths. For some viewers, it may be the first time they hear about the high levels of trauma associated with trying to reshape who LGBTQI Christians are.

The truth spoken by Bussee, Paulk, Thomas, Rodgers, and Schneider is uncomfortable and will likely threaten ministries like Yuan's, et al. Understandably, they'll scramble to discourage people from watching the film by dismissing the words, lives, faith, and journeys of the documentary's participants, just as Yuan did on The Steve Noble Show with his lies.

As uncomfortable as it will be for some viewers, it will be freeing for others. Be informed.

Watch the documentary for yourself .