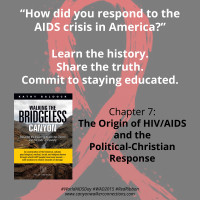 How a person contracts a disease should not be the barometer by which Christians determine their attitude toward the sick and needy. We are to reflect the same covenantal, unconditional posture of love and concern that God freely expresses toward His children, especially visible through His Son Jesus Christ. 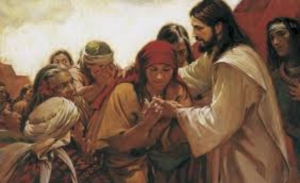 Jesus’ ministry exhibited a compassionate view of sickness, suffering, and poverty. He responded to the sick with humane acts intended to alleviate their suffering. He called His followers not to judge, but to emulate His merciful concern and sympathetic actions. Leprosy was the HIV/AIDS of Jesus’ day; lepers were the social outcasts, often isolated and ignored. Jesus’ example is clear. It is recorded in the Bible that He touched the afflicted with His hands and prayed for them. In the Gospels, we see Jesus repeatedly more concerned with reflecting the compassionate love of God than with dissecting illness and assigning blame.

Early records dating to less than two hundred years after Christ lived on earth document Christians, at risk to their own lives, caring for sick and dying people during extreme epidemic and pandemic conditions. Followers of Christ took seriously the words of Jesus recorded in John 13:34-35: “A new command I give you: Love one another. As I have loved you, so you must love one another. By this all men will know that you are my disciples, if you love one another” (NIV). 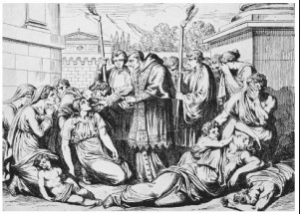 pandemic now believed to be smallpox that was introduced to the Roman Empire by soldiers returning from Syria. Five million people died as it ran its course. In the following century, the Plague of Cyprian (251–266 AD) spread from Africa throughout the known world. It was transmitted person-to-person by physical contact and by touching or using clothing and items infected by the sick. Half of all people who encountered the disease died.

During each pandemic, government officials and the wealthy fled the cities for the countryside to escape contact with those who were infected. The Christian community remained behind, transforming themselves into a great force of caretakers.

On Easter Sunday in 260 AD, Bishop Dionysius of Corinth praised the efforts of the Christians, many of whom had died while caring for others. He said:

Most of our brother Christians showed unbounded love and loyalty, never sparing themselves, and thinking only of one another. Heedless of danger, they took charge of the sick, attending to their every need and ministering to them in Christ, and with them departed this life serenely happy; for they were infected by others with the disease, drawing on themselves the sickness of their neighbors and cheerfully accepting their pains.

The early Christians’ dedication to caring for their neighbors as themselves during times of plague and sickness, whether the sick were believers or not, showcased the integrity of their unique message of love for others. These Christ-like actions had great social impact and attracted outsiders to the faith. This kind of selfless love caused an explosion of Gentile Christian congregations to arise alongside Judeo-Christian communities. 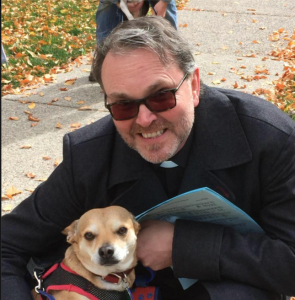 Two of my minister-friends recall the AIDS crisis. D. Greg Smith was ordained as a Roman Catholic priest in 1991 and came out and left the priesthood in 1999. He says:

I was very involved with faith communities in the beginning of the AIDS crisis, and for the most part, I’m very embarrassed by the early response of churches to this disease. Most were very quick to judge the disease as God’s punishment rather than seeing what it was: a wonderful chance to show God’s love even in the face of death, disease and suffering.

This is a disease spread by people attempting on a variety of levels to be loved, to express intimacy and to connect with others. Like every other disease that’s primarily transmitted sexually, we are very quick to show ignorance and judgment in order to avoid our own shame. Education and enlightened theology helps, but it’s definitely a problem for biblical literalists who tend not to rely on science (or reality) to inform their faith.

And some still view it as God’s judgment. I don’t and have never felt that way. Our job as Christians is to jump into another’s suffering and work to alleviate it, not walk by on the opposite side of the road.

Greg is a licensed counselor; serves as the Director of AIDS Outreach in Bozeman, Montana; and lives with his longtime partner, Ken. He is a beautiful human being. “I have never doubted God’s love for me, not for a second,” Greg says. “As an ordained gay man living with HIV, I believe I represent an opportunity to help others love as Jesus did without reservation or hesitation. If they don’t want to love me, that’s okay. They can’t stop me from loving them.”

Rev. Gerald Green is a minister with the Unity Fellowship of Christ Church in 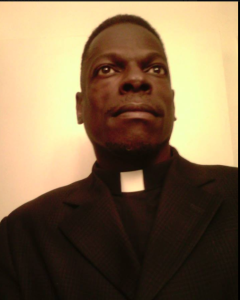 San Diego. He worked in the African American community in the early days of the AIDS crisis and has continued doing so for the past twenty-five years. He shares:

As a person of faith and a minister of the Gospel, I wasn’t too surprised at the response of the church at large and the black church in particular as it related to the onset of AIDS in the late ’80s. I remember it like yesterday. I went to more funerals, memorials, and celebration of life services than I care to remember.

My first knowledge of AIDS was when a good friend of mine in the entertainment business who danced professionally contracted the virus. One day he was vibrant and talking on the phone, and a couple of weeks later I was reading his obituary at his funeral. I never thought HIV/AIDS was a punishment from God then [or] now. The churches in the black community where I came from refused to officiate and hold the funerals of those who had made transition from this expression to the next. Families were devastated because they had helped to build churches in their community, and when the institution they built turned their backs on them, we were all crushed. I had close friends who were musicians at churches for years, and once it was discovered they had AIDS, they would be thrown out and told they were an abomination.

I went searching for answers, and God pointed me to the direction of a church in South Los Angeles called Unity Fellowship of Christ Church, founded by Rev. Carl Bean.

Archbishop Bean founded the Minority AIDS Project in Los Angeles, the first organization of its kind in a community of color, as well as being operated by people of color. Archbishop Bean, an openly gay man, knew he could not sit by without doing something to touch the lives of those suffering so they could know that God loved them and they could have dignity.

How might the Christian church as a whole have behaved in the earliest years of AIDS, not only in light of the Gospel, but also with reflection upon early church records of service to those in extreme epidemic/pandemic conditions? First, we missed it. We missed the opportunity to be Jesus with skin on. People living with AIDS were banished or estranged from their families and friends, and from housing, jobs, schools, and churches.

Many denominations and religious organizations holding a more compassionate, nonjudgmental view of people living with AIDS leaned toward education, needle exchange programs, and condom distribution and usage. But for the most part, they did not begin speaking up until 1987. The exception to the silence came from two organizations in 1983: The National Council of Churches of Christ and the Universal Fellowship of Metropolitan Community Churches (MCC) committed themselves to advocating and caring for people living with AIDS.

As the public became educated about HIV/AIDS, religious denominations announced official declarations and stances. In 1988, the 9 million member United Methodist Church, known for its long history of social activism, developed a policy called “AIDS and the Healing Ministry of the Church.” The 5 million members of the Evangelical Lutheran Church in America were encouraged to support and participate in ministry to people suffering with AIDS. The Presbyterian Church (USA) and its 3 million members resolved that AIDS was an illness and “not a punishment for behavior deemed immoral.” They promoted information to the membership to counter the cultural stereotyping of people with AIDS. 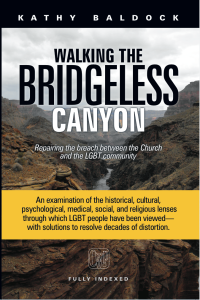 View all posts by Kathy Baldock →
The Face of AIDS Becomes a Child: Ryan White
A Gay Christian Man Was the Instrument of Healing My Pain