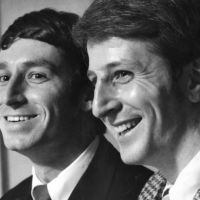 By Kathy Baldock on June 20, 2015 in All Posts, Education/Hist., Marriage
Tweet 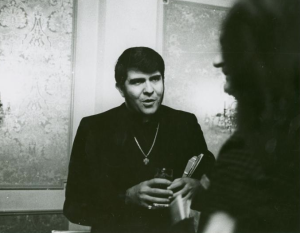 The fight for marriage equality in the United States seems to have a short history of little more than a decade, yet the road to marriage equality is far longer. Though the first state to pass marriage equality laws was Massachusetts in May 2004, the quest for same-sex marriage actually began before that—forty-five years ago, in fact, just a few years after the Loving v. Virginia decision.

In December 1968, Rev. Troy Perry, founder of the Metropolitan Community Church (MCC) in Los Angeles, performed the first public same-sex “holy union” in the United States. In 1969, Rev. Perry sued the State of California for recognition of the civil rights of a couple from MCC, Neva Heckman and Judith Bellew, on the grounds that the couple had been together for two years and thus fit the definition of a common-law marriage, for which California State law did not specify genders. The suit was dismissed, and Perry continued to marry couples in his church.[1] 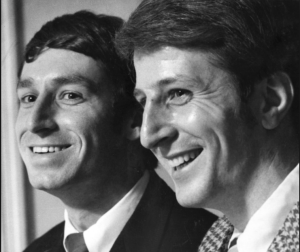 The earliest successful same-sex marriage took place in Minnesota as the result of an oversight. Jack Baker met James McConnell in 1966 at a Halloween party in Norman, Oklahoma. Not long afterward, Baker, a U.S. Air Force veteran, was fired from a job on the Air Force base for being gay. The couple relocated to Minneapolis, where McConnell worked at the University of Minnesota library and Baker studied law. They applied for a marriage license in Hennepin County in 1970.

The application was blocked by the district attorney, whose ruling was supported by the Minnesota Supreme Court, which stated: “The institution of marriage as a union of a man and a woman, uniquely involving the procreation and rearing of children within a family, is as old as Genesis.”[2] The court decision did not deter Baker and McConnell, who were determined to get married.

In 1971, McConnell changed his name to a gender-neutral name, Pat Lynn McConnell. Jack and “Pat” moved to another Minnesota county and, after a waiting period, applied for, and were granted a marriage license. A sympathetic Methodist minister married the pair. The county judge, thinking the case wasn’t worth pursuing, allowed Baker and McConnell to remain legally married.

Baker and McConnell are now in their seventies and have been together for over forty years. McConnell is retired from the university library, and Baker has had a career as an attorney and successfully ran for Minneapolis City Council and a judgeship. When marriage equality came to Minnesota in 2013, the couple opted not to get married. “We are already legally married,” Baker said.[3]

Opposition to marriage equality also began over forty years ago

In 1973, the same year the American Psychological Association declassified homosexuality as a mental illness, the citizens of Maryland passed a statute banning same-sex marriage. Until the June 2015 challenge in the Supreme Court, thirty-seven states had such bans in place, in the form of either a constitutional amendment or a state law. 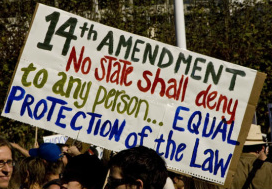 The state laws were challenged in the Supreme Court under the decisions in the Loving v. Virginia and Zablocki v. Redhail cases, declaring marriage an American civil right. Specifically, the challenges are grounded in what is often called the Due Process Clause of the Fourteenth Amendment, which says that states may not deprive persons of life, liberty, or property without due process, and the Equal Protection Clause, which ensures that “No State shall . . . deny to any person within its jurisdiction the equal protection of the laws.”[4]

Some have argued that the “wish of the people” is being ignored by judges overriding state laws, statutes, and amendments; however, no group of people, not even the majority, has the right to withhold the civil rights of any other group.

In 1967, only 4% of Americans approved of interracial marriage,[5] yet the Supreme Court dismissed the desire of 96% of Americans who did not support it in order to preserve the rights of the minority. As of 2013, approval for marriage equality was well over the 50% mark, and is increasing by about 2% each year.[6] 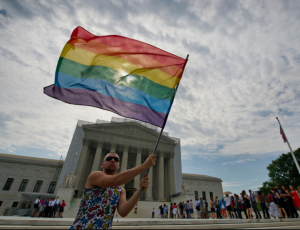 Public opinion on marriage equality in the United States has shifted rapidly in recent years, largely due to relationships. As more lesbian, gay, bisexual, and transgender people come out and we in the straight majority get to know them, support grows nationwide for their access to marriage, a civil right of fundamental importance for all Americans.

As the Supreme Court extends federal marriage equality, the United States will join the other seventeen countries[7] of the world that extend marriage rights to same-sex couples.

[6] Nate Silver, “How Opinion on Same-Sex Marriage Is Changing, and What It Means,” New York Times, March 26, 2013, http://fivethirtyeight.blogs.nytimes.com/2013/03/26/how-opinion-on-same-sex-marriage-is-changing-and-what-it-means/?module=Search&mabReward=relbias%3As.