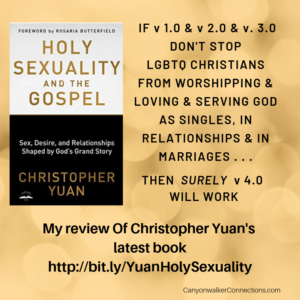 UPDATE: November 30: Bigger guns directly protested my reviewing on Yuan and other Christian authors. I was depicted by them as a “layperson and a troll,” where as Yuan is an academic.
My goodness. One of the book’s five star reviewers has only reviewed a door latch. Do we really want to dismiss the reviews on people who are not degreed on a topic?
**********************
On November 26th, I submitted my review on Christopher Yuan’s newly published book, “Holy Sexuality and the Gospel: Sex, Desire, and Relationships Shaped by God’s Grand Story” (Multnomah, WaterBrook Multnomah, Division of Crown, 2018) to Amazon.

When it had not posted 12 hours later, I contacted Amazon with my concerns. I was assured I was being heard and the situation would be looked into. Twenty-seven hours after I submitted the review, it went live. I pushed it out and checked on it the next morning at 8 am. The review had 55 “Helpful” votes and 3 comments. Then, suddenly, the review disappeared.

Thankfully, I have a “powerful phone connection” (PPC) who has advocated for me before with Amazon. In the past, numerous publishers, authors, and conservative Christian leaders have registered formal complaints about my reviews. Am I breaking any Guidelines? No, being a prolific reviewer, I know the guidelines well. Am I a “Verified Purchaser”? Always. I spend more money than I can reasonably afford on books I  need both to read for research, and want to read to stay aware of LGBTQ Christian issues.

PPC called Amazon to investigate what happened to my review. He found that a representative of the publisher contacted Amazon and asked them to pull the review. A person at Amazon did.

I wondered with my PPC about how to best conduct a protest against this intentional decision to censor my review. At the 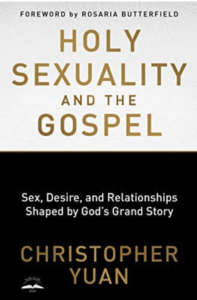 suggestion of another person, we thought a productive and direct action would be for others to post the exact text of my review under their account names with a title of the review indicating protest of censorship.

I suggested this action on Facebook and connected to the copy of my review text. Several people also thought it was a good way to protest censorship and posted my text with their protest title on the Yuan “Holy Sexuality” Amazon review page. So many took this action, that in a short time, Amazon shut down all reviews on Yuan’s book.

Throughout the day, people were emailing me, texting me, posting, and sending me messages about the actions they were taking: emails and calls to Amazon, and Tweets to Amazon and the publisher. I could see the response was swift and strong. I waited patiently for Amazon to respond. Late last night, at 10 pm PST, my review reappeared. Friends notified me.

This morning PPC called me. Amazon did take this decision by one or two individuals to censor my review very seriously. As did the publishing house. Without going into public details, actions have been taken to show the censorship exercised on my review was against both Amazon’s and the publishing house’s policy.

When I reviewed Christopher Yuan’s last book, “Out of a Far Country, co-authored by his mother, I was stunned at the backlash I experienced from what I can only imagine was “prayer warriors” motivated by Yuan and his mother. Within in two days of posting that review, I had almost 300 “unhelpful” votes (there is no longer such an option on Amazon reviews) and lots of negative public comments. What I had not expected however, and which was a completely uncharacteristic response to my reviews, was the large number of emails sent to me. The overwhelming tone of those emails was one of shaming, a tactic I ironically addressed in my review.

One of the more lengthy emails accused me, a non-Asian woman, of not understanding the custom and loyalty of caring for and loving one’s parents. (I am typing this as my own 87-year-old mother is still at sleep in my home. She suffered a mini-stroke two months ago. I am taking all the step I can as her child to care for her, and make good choices with her. Whatever that demands of me.)

I knew I would suffer backlash for this review because I was willing to write about what I see—Yuan has amped up his message and it will harm even more people. He is one of the current crop of poster-people for the ex-gay, same-sex attracted, gay and celibate camp that the conservative church needs to promote. I anticipated that my review would net me more shaming mail and commentaries. I did not know, or even think, a publishing house would try to censor me.

I have no evidence, but, knowing the past reactions to my Yuan book review, I believe Yuan and mother initiated the drive to pull my “Holy Sexuality” review. Those kinds of manipulative actions inherently cause reactions, including reactions from people who support and are protected by my honest reviews which pushback against anti-gay (though these authors would likely never see their work as “anti-gay”) narrative so prominent in conservative Christianity. There are also consequences for people who comply with such pressures. Let the manipulators sit with that one. 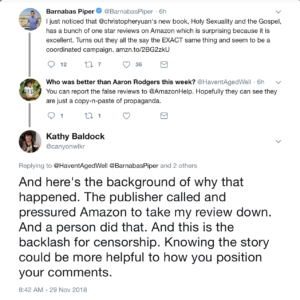 I was alerted this morning that there is much chatter brewing on on Twitter @BarnabasPiper, (John’s son), is sure of a conspiracy originating with me, horrors!) within conservative groups about me and my “dishonest” propaganda tactics. I am being accused of all manner of things: creation of many Amazon accounts to post and repost my review, “going after” and attacking the people of God, and, of course, the overused comments about my lack of faith, that I am not a Christian, that I am uneducated, and the foreseen like comments.

Sadly, this was all quite predictable. Rather than engage what I am writing and compassionately and empathetically seeing the impact of Yuan’s work, people imagine who and what I must be, and I get attacked.

Let the storms rage. I will continue reading, reviewing, researching for my next book, and writing.

But today, I am taking my mom, aka Buttercup, down to the Chocolate Nugget Candy Factory to get her favorite handmade salted chocolate covered caramels. That outing was on my to-do list yesterday, but I got sidetracked with fighting censorship.

REALLY important update: Buttercup now has her salted caramel chocolates from the Chocolate Nugget Candy Factory. I did not let fighting censorship take over the important tasks of the day, one of which is to keep Mom happy.

Yesterday, when she realized I could not take the time to drive down to Washoe Valley to get her favorite chocolates, she said, “Christopher, you-on my sh*t list.” He is now free to join other lists. Eighty-seven-year-old Buttercup has her candy.