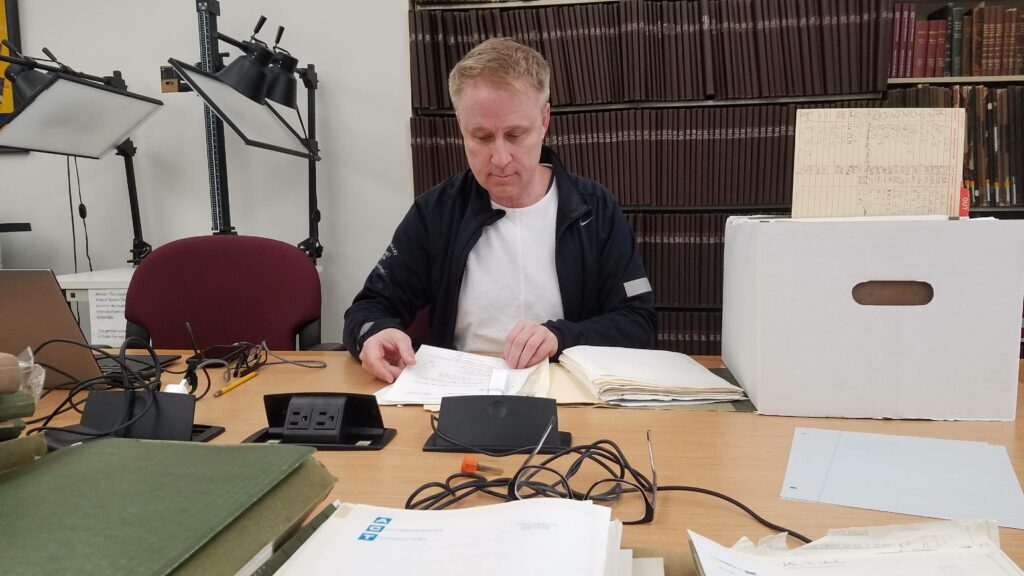 Ed Oxford, co-authored of "Forging a Sacred Weapon: How the Bible Became Anti-Gay" and is also featured in the documentary by filmmaker Rocky Roggio "1946: The Mistranslation that Changed a Culture."

Ed is a gay Christian, a graduate of Talbot School of Theology, and a researcher specializing in the history of the Bible, Bible translations, and the Greek and Hebrew translations of the texts associated with sexuality. He has amassed an extensive and impressive collection of Bibles, lexicons,  commentaries and dictionaries dating back to the 14th century.

I was born and raised in a Southern Baptist church by two incredibly amazing parents who dearly love the Lord. It was a great experience. I remember Sunday school and Training Union, contributing to Lottie Moon and Annie Armstrong for foreign and home missions, and many other traditions that still bring fond memories.

My heart for missions began as a kid in that SBC church and, ultimately, resulted in answering God’s call to help fulfill the Great Commission by serving overseas in Japan. I later returned stateside and enrolled in Talbot Seminary to grow in my understanding of God’s word.

It was my Southern Baptist roots where I gained a deep appreciation for Scripture. My heart’s desire was to do my part in spreading the gospel. I wanted to share Christ and disciple others and was gearing up for a lifetime of furthering the kingdom of God.

Having heard many sermons throughout my life, I was convinced God did not want me — nor could God use me. I was an abomination. I was “damaged goods.” I tried to change. Oh, I tried so hard! Prayer and fasting. Reparative therapy. The only thing that changed was that I experienced more and more depression.

So I just held on to the hope that God would one day provide a way — some special pill, an accomplished therapist, or I would just miraculously wake up straight.

Church taught me that gay people were horrible and nasty. They had an agenda. They wanted to destroy the family and, ultimately, the church.

I recognized in my teenage years that I was same-sex attracted and thought it was just a stage I would grow out of. During college, I realized it was not going away and in fact was getting more intense.

One day during my personal Bible study and devotional, I was reading Acts chapter 10 where Peter saw a vision of God letting a sheet descend with all kinds of unclean animals. Peter was disgusted by what he saw, but God told him not to call them disgusting because God created these things and God had made them clean.

As I reflected on those words, the thought came to my mind: “What if God was OK with gays”? I immediately dismissed such a notion as horrible and satanically influenced. However, God’s Spirit continued to work on me, even seeming to offer the question, “Well, what would you do if an angel came down and told you that God was OK with you being gay?” (Kind of like Paul’s road to Damascus experience.)

I was shocked! I could not believe my mind entertained such a notion. The Bible is clear on this issue, so there is no reason for debate. If I were to hear this from an angel, I would have written it off as Satan disguising himself as an angel because I felt God’s word was clear.

Thus, I was declaring to God that the only way I would ever change my mind about homosexuality was if God showed me through Scripture. In that moment, I had set a condition before God. God was going to have to convince me that Scripture was teaching something different than what I thought it was teaching.

About a decade later, after many episodes of extreme depression, I decided I wanted to dig into this with all my heart, soul and mind. I wanted to know the truth, regardless of what it entailed or revealed. I did not set out to prove or disprove any preconceived narratives. Instead, I only sought facts in order to weigh the evidence.

I started with the Greek and Hebrew texts and realized I needed to study the historical context of each of these texts in order to clearly understand the passages. So I put my seminary training of Greek and Hebrew to work.

One of the many things I discovered was that the English word “homosexual” was not in any Bible until 1946, when it appeared in the Revised Standard Version. I was shocked. I wanted to know who put it in there and how they came to that conclusion.

My research led me to the Yale University archives, where the RSV translation notes are held. In September 2017, I traveled to Yale with author and researcher Kathy Baldock and spent many days searching for the answer to the question, “Why did this translation team make the historic decision to put the word ‘homosexual’ into the Bible for the first time?”

This team of 22 men were extremely godly and ahead of their time. The letters they left behind showed how they encouraged churches and church leaders to include Blacks and women on committees where important decisions were being made.

Luther Allan Weigle, head of the RSV translation team, has been called the father of the modern Sunday school movement because he introduced curriculum that could be used to teach children about Bible stories. He was a big advocate for missions in Japan and China. And one time he received a letter from an elderly lady asking that he write Congress requesting the discontinuation of the poll tax. (Citizens in her town were required to pay $1 for a voter registration card. But poor families could not afford this and instead spent that $1 on much needed food, thus preventing their representation in elections). Weigle enthusiastically agreed and wrote a letter to Congress.

On the third day at Yale we found the answer — after we got to know this wonderful team of translators. The answer was found in an exchange of letters between a seminary student and Weigle. This seminary student challenged the usage of the word “homosexual” in 1 Corinthians 6:9 and provided a detailed outline of his reasoning. Weigle responded and admitted that the translation team had indeed made a mistake and would seek to correct it in their next update.

However, Weigle had just signed a contract stating that he would not make any changes in the RSV for 10 years. During those 10 years, translation teams were working on the translations of the first New American Standard Bible, The Living Bible and New International Version Bible.

We then went to research in the translation notes of the NASB, TLB and NIV Bibles. It turns out these versions used the RSV as their basis for including the word “homosexual” in their translations, not knowing that the RSV had retracted its decision.

The RSV committee decided the word “homosexual” was an inaccurate translation of malakoi and arsenokoitai in 1 Corinthians 6:9 and replaced it with “sexual perverts.” An example of “sexual perverts” would be a dirty old man exposing himself to children on a playground. The RSV team admitted that the Greek word arsenokoitai was not condemning homosexuals, but instead those who were abusive in their pursuit of sexual encounters.

First century people had no context of same-sex, committed monogamous relationships, therefore they would not be able to have the perspective we are able to see after 150 years of studying homosexuality. We might as well ask them what they thought about iPhones. They would have no frame of reference. But Paul definitely did not approve of the reprehensible same-sex activity that involved various abuses. Hence his words in 1 Corinthians and 1 Timothy.

The three main English Bible versions of the 1970s (NASB, TLB, NIV) are the translations I grew up on. They are the most influential English translations in our lifetime. Since their publication some 40 years ago, we have seen the largest amount of teen and young adult suicide in the history of the world. How can this be? In part, it is because we have been giving the wrong advice, advice shaped after the word “homosexual” entered the Bible.

Since our time in the Yale archives, I have done an enormous amount of investigation. I traveled thousands of miles, spent tens of thousands of dollars on research, and interviewed hundreds of people. I ultimately realized that the evidence is incredibly overwhelming. I eventually had to admit that I had been wrong about homosexuality. I had to admit that my church and my denomination had been wrong about homosexuality. My Southern Baptist background taught me to approach Bible study as a Berean, and the Bereans in Acts 17 wouldn’t even believe the Apostle Paul’s words until they studied the Scriptures and did their own due diligence.

So for me to continue down the path of a non-affirming theology would have required me to discard the volumes of irrefutable facts I had uncovered from intense research.

All this reminds me of how we Southern Baptists made that atrocious mistake 200 years ago regarding slavery. Some Southern Baptist pastors felt that “if we abolished slavery, we might as well do away with the New Testament because we wouldn’t be following it anymore.” They actually believed they were being obedient to God’s word by holding on to slavery. Ridiculous, huh?

Looking back from our 21st century perspective, we find it difficult to comprehend that pastors taught such things. But for them, it was real. It was a matter of following their (misguided) understanding of God’s word in order to hold on to slavery.

So much damage has been done. Too many lives have been lost. It’s time to fix this.

Forging a Sacred Weapon: How the Bible Became Anti-Gay