At the age or 21, a young seminarian in Canada wrote to Dr. Luther Weigle, the head of the Revised Standard Version translation team. He had a simple question. One that had never been asked of the translation team in the 13 year span since the New Testament portion of the RSV had been published in 1946.

"Why did you translate two Greek words to 'homosexual'?" The response he received is the only historical record as to why the translation team made the decision they did.

When challenged, they admitted an error of translation.

This is David, who became a minister in the United Church of Canada. Rev. David remained closeted for his entire life. He came out publicly in January 2018 for the purpose of creating a historical record to support research and to tell his life story. 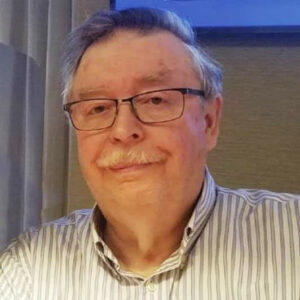 In 1959, David was a 21-year-old first-year seminary student in Canada. Everyone around him recognized him as a spiritually sensitive person. When he was six years old, his mother knew that she needed to switch church homes so that young David could be in a better Sunday school program. His minister, who had watched him grow spiritually through his teen years into early manhood, recommended him for the United Church ministry track at age nineteen. People around him recognized him as someone special and set apart.

He had always loved reading his Bible. In his earlier years, he read the King James Version. In 1952 the Revised Standard Version (RSV) was adopted by the United Church for use in general worship. During his first year of Divinity School, David began reading the RSV. It was then that he came across its translation of I Corinthians 6: 9-10:

(j) two Greek words are rendered by this expression

David had known he was gay since the age of sixteen. He also knew he was both loved and accepted by God and called to the ministry. The RSV was the first time in any translation of the Bible, in any language, that the word “homosexuals” had been used. David thought the RSV wording of I Cor. 6:9-10 was wrong. He checked the wording of the passage in the KJV and thought it was more accurate (“nor effeminate, nor abusers of themselves with mankind”). Then he looked in his Greek lexicon for the meaning of the two Greek words (malakos and arsenokoites) indicated as combined in the RSV footnote. This convinced him that the RSV translation team had made an error.

After much thought and study, he wrote a several-page compelling letter stating his case and sent one copy to The National Council of Churches of Christ in the United States of America (NCC), the organization that commissioned the RSV, and the other copy to the publisher, Thomas Nelson Publishers. The NCC Executive Secretary sent his letter on to Dr. Luther Weigle, Dean of Yale Divinity and the head of the RSV translation team. David was surprised to receive a personal response a few weeks later from Dr. Luther Weigle. The two exchanged two additional letters. In the final letter, Dr. Weigle agreed the team would consider an alternate term for “homosexuals” in the next revision.

David never spoke about or shared the contents of the letters with anyone. He didn’t want to risk someone, even considering that he might be gay himself. After all, it was the 1950s. Why might a person care to address the topic so thoroughly and passionately unless he were gay? In signing the letter, he altered his identity enough to ensure privacy.

His letter exchange with Dr. Luther A. Weigle, the head of the RSV translation team, remained hidden in the Yale Archives for over fifty years until Kathy and Ed discovered it.

This exchange of letters is the ONLY historical evidence as to why the translation team made the decision that they did—to combine two Greek words into one word. The word they chose to represent the behavior they believed the Bible addressed was the word "homosexual."

The translation work on 1 Corinthians had been completed between 1935 and 1937 and finalized by the RSV team in 1940. At the time, homosexuality was thought to be a mental illness, a crime, and a sexual perversion. The team translated in the context of their time and knowledge.

When David challenged them in 1959, Dr. Weigle admitted the error and indeed changed the translation to "sexual perverts" in the next RSV revision.

So, who was this David who wrote to the translation team in 1959?

Through the most amazing series of events** (attributed to the hard work of a friend, Tina Wood), we found David’s identity about a year after our visit to the Yale Archives. And he was still alive! It had been an overwhelming challenge to locate him. When Tina finally found his identity, we understood why the task had been so difficult. David had signed the letters using only his first and middle names. The post office box return address further complicated finding him.

Early one August 2018 morning, Tina sent me an email with the heading “I may have found him.” She had David’s full name and contact information. Ed and I had never imagined the twenty-one-year-old who’d written the letter was still alive!

I phoned him at his home at 9 am. “Hello David, my name is Kathy Baldock, and I live in Reno, Nevada. I’ve been working with a friend on a project looking into the translation notes for the Revised Standard Version of the Bible. Amongst over sixty thousand documents, we came across a letter questioning the translation teams’ use of the word ‘homosexuals.’ It was written in 1959 by David _____. Did you write that letter?” The stunned eighty-year-old responded, “Why, yes, I did.”

When he wrote the letter, he thought “hundreds, if not thousands” of people would have held the same objections to the translation and also contacted the RSV team. In fact, he was the only one who had. This surprised him. He also thought surely his letters would have been “tossed in the dust bin.” Yet, sixty years later, I had copies. And his input impacted a future revision.

We’ve chatted and emailed many times in the following months. David has 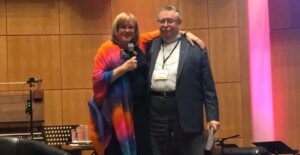 told me his life story. After Divinity School, he did become a minister in the United Church and served in seven pastorates over a thirty-seven-year span. He’d also been partnered for twenty-three of those years with Joe, whom everyone assumed (from an old rumor that David never corrected) was his cousin. They’d been a couple until Joe died from long-term kidney issues he’d suffered his whole adult life. ***

Ed and I invited Rev. David to join us at the Q Christian Fellowship Conference in Chicago in January. We met him in person for the first time. What a blessing it’s been to not only discover his identity, then to find him alive, and further to realize he is a smart, witty, kind, sweet, and pastoral gentleman. Picture the ideal combination of pastor and grandfather, and that is Rev. David.

This is the stuff great documentaries are made of! Look for the documentary in late 2022 or early 2023. 1946: The Mistranslation that Shifted a Culture.

Forging a Sacred Weapon: How the Bible Became Anti-Gay

The book will be published in all formats late 2021

When acclaimed Documentary Filmmaker Rocky Roggio heard about the groundbreaking discovery that Kathy Baldock & Ed Oxford uncovered in their research, she knew without a doubt that her life's path as a storyteller had led her to tell this one. It was personal.  1946themovie.com.