Every year around June when the majority of Gay Pride Events take place you'll apt hear, "We want God's rainbow back; the gays stole it." Just as no one culture or group "owns" the rainbow, we'll see the gays did not "steal" the rainbow, and likewise, they did not steal the word "gay."

I was taught the acronym Roy G. Biv in fourth grade. We could easily remember the sequence of the colors of the rainbow: red, orange, yellow, green, blue, indigo, and violet, by a fictional man's name. 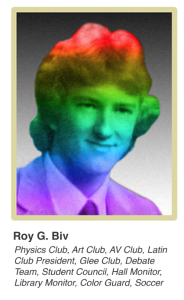 will reveal the colors are: red, orange, yellow, green, royal blue and violet, or Roy G. Bv, no indigo. The history of how the LGBT flag came into being may erase the notion of a mythological theft.

Gilbert Baker (1951-) was raised in Kansas where his grandmother owned a women's clothing store. As he watched her sew, he knew he wanted to learn the skill, but in the 1950s and 1960s sewing was not a "boy" task. When Baker was discharged from the Army in San Francisco, he decided to remain in the city. One of the first things he did was purchase a sewing machine so that he could copy the "fabulous" jumpsuits Mick Jagger and David Bowie wore. Baker also did drag and made his own costumes. 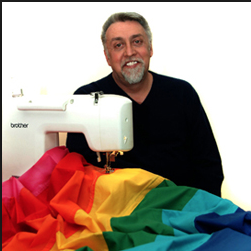 In 1974, Baker met Harvey Milk in the early years of the activist's career. Three years later, Milk was elected to the San Francisco Board of Supervisor, making him the first openly gay person to hold an elected office in a major American city. In 1978, Milk challenged Baker, by then working at the Paramount Flag Company, to come up with a new symbolic flag for the gay community to replace the pink triangle once used by the Nazis to identify homosexuals.

Baker, both an artist and a seamster, took on the challenge of making a large flag. He hand-dyed the fabrics and stitched together eight panels of colored cloth each with a meaning: hot pink (sexuality), red (life), orange (healing), yellow (sunlight), green (nature), turquoise (the arts), indigo (peace and harmony), and violet (spirit) -- P Roy G. Tiv.

Wanting a large number of P Roy G Tiv flags to be reproduced, Baker approached his employers to get the

task done. Unfortunately, mass quantities of hot pink fabric were not readily available to make the P Roy G. Tiv flags. However, the Paramount Flag Company did have a surplus on hand of Roy G. Biv flags made for the Order of Rainbow for Girls, a Masonic organization, that had never been picked up.  The surplus was used for the 1978 parade. 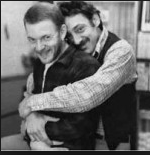 After Milk's assassination in late 1978, and with the increased anti-gay activism spurred on by Anita Bryant, the demand for the flag increased for the following years' parade. The parade committee wanted the originally designed P. Roy G.Tiv, minus the tough-to-find hot pink, to be split into two sets of three with the equally balanced flags to be displayed along the parade route. This meant one of the remaining seven colors of Roy G. Tiv had to go. Indigo and turquoise were both eliminated and changed to royal blue making the next and present version of the LGBT rainbow flag Roy G. Bv.

So, no one "stole" God's rainbow. As if that were even possible. The rainbow has symbolism and stories attached to it in many cultures. To the Irish, a leprechaun's gold is hidden at its end. To the Hindus, the rainbow is the bow of the god of thunder and rain. The Chinese believe the rainbow is a slit in the sky that is sealed with stones of various colors. And, the Gay Pride Rainbow flag is one color short of thievery anyway, it is Roy G. Bv.

Speaking of stealing, the gays didn't "steal" the word "gay" either. 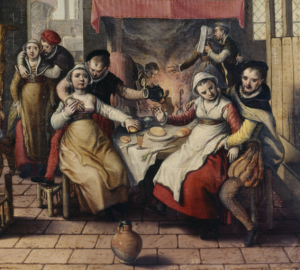 The word “gay,” meaning “happy,” came into the English language at the end of the first millennium. It is derived from the French word gai, meaning “merry.” In the 17th century, gai took on a second meaning, one associated with the self-indulgent, loose, and immoral life. By the 19th century, the word was used to describe prostitutes, primarily females, and the activities in which they engaged. To “gay it” meant to fornicate. Words used to describe gay men are consistent in the pervasive use of words used first to demean women.

In the late 1890s, a Scottish variation of the word “gay” was used in “gey cat,” which referred to a younger man or boy whom a hobo took under his wing to protect and show the ropes. A gey cat was often the hobo’s catamite—a boy prostitute or sexual servant. By the 1920s, sexual inverts (as homosexuals were then called) started using the term “gay,” associated with “gey cat,” in their own private social circles to refer to one another.

It was a convenient form of secret code, as “gay” still had the more common meaning of “happy.” By the 1950s, “gay,” meaning “homosexual,” moved into usage in the wider society. At first, it only indicated gay men and only later, starting in about the 1970s, included lesbians.

Gay people did not commandeer the word “gay.” Repeatedly I’ve heard the complaint: “They changed the meaning of the word ‘gay’ from happy to homosexual, and now we can’t even use the word ‘gay’ to mean happy anymore.” No, no, no. The word “gay” had two completely different meanings. No one “stole” the word.

As with many words, the meaning of “gay” has evolved over time. It is more likely that straight people, responding to cultural and sexual shame, didn’t want to risk personal association with homosexuals by even using the word “gay.” Fortunately, there are plenty of other words to indicate happy, cheerful, and merry.

What about the word "pride"? 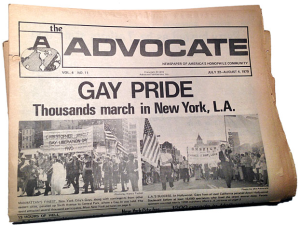 planned formal protest march on the one-year anniversary of the resistance to systemic arrests by police at the Stonewall bar in Greenwich Village.

While planning for the anniversary march, several events were added to expand awareness of the issue. Bisexual Brenda Howard suggested that the word “pride” be attached to the entire observance, and it was scheduled for the third Sunday of June to coincide with the incident at Stonewall.

In the 1980s, the term “Gay Pride” became standard, marking the parades less of a radical activist event as it had been in the 1970s and more as one with a celebratory atmosphere.

After so many decades of being shamed, pride seemed a natural antidote and a statement of healthy self-esteem for a community once rejected and imprisoned by the stigmas forced upon them.

Perhaps thinking of Gay Pride events as a kind of Independence Day for the gay, lesbian, bisexual, and transgender community puts it in perspective. The gay and transgender communities and those who support them participate in Gay Pride events to commemorate the June 1969 Stonewall action signaling the end of oppression and the beginning of liberation, and to celebrate diversity in how human relationships are expressed.

Gay Pride events were born to celebrate the end of cultural persecution. It should be abundantly clear that there is no need for Heterosexual Pride Parades, silly notions in themselves. Heterosexuals have not suffered the same class-wide oppression for who they are and who they love.