The word "homosexuals" was first introduced into the Bible in 1 Corinthians in 1946. The same Greek word appears in both Corinthians and Timothy? What might the words that were combined and then translated to "homosexuals" mean? 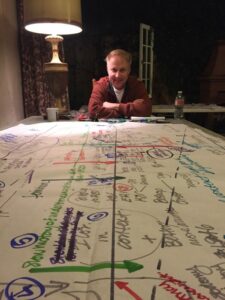 Are these passages about homosexuality or sexual immorality in general?

There are three passages in the New Testament associated with same-sex behavior. Two are in 1 Corinthians 6:9-10 and 1 Timothy 1:9-10. The passages contain two Greek words, arsenokoitai, and malakoi, crucial to understanding the intent of the verses, yet challenging to translate into modern-day English. Consequently, not all English Bibles agree on how the words malakoi and arsenokoitai should be translated. Many translations, such as the NIV below, combine the two distinct words into one word. We’ll see why this is problematic.

We also know that the law is made not for the righteous but for lawbreakers and rebels, the ungodly and sinful, the unholy and irreligious, for those who kill their fathers or mothers, for murderers, for the sexually immoral, for those practicing homosexuality [arsenokoitais], for slave traders and liars and perjurers—and for whatever else is contrary to the sound doctrine that conforms to the gospel concerning the glory of the blessed God, which he entrusted to me. (1 Timothy 1:9-10, NIV 2011)

Let’s start with arsenokoitais in 1 Timothy 1:9-10 before we move on to 1 Corinthians 6:9-10, where both arsenokoitai and malakoi are used. Arsenokoites was rarely used in Greek writings. Paul seems to have coined it from two words: arsen, meaning male, and koites, meaning bed. Some have speculated that the word Paul used comes directly from, and has the same meaning as, arsen and koiten in the Greek translation of Leviticus 20:13: “males who lie with males.” The Hebrew words arsen and koiten used to describe events 1,600 years before Paul, suggest pederasty, or men having sex with young boys.

As used by Paul in the first century, arsenokoitai likely means pederasty. Pederastic relationships, inherently abusive and exploitative, are not equivalent to committed, loving, and monogamous same-sex relationships today. To say that they are would be like saying sex trafficking of young girls is equivalent to marriage.

But how can we verify the essence of arsenokoitais in this passage? The only way to get closer to the intended meaning is to find it used in context in other texts around the same general time period—in this case, the first century. This, too, is problematic. Arsenokoites is found in fewer than one hundred writings over a period of six hundred years, and in most cases, it is in lists that don’t provide narrative clues. Most frequently, arsenokoites was associated with money and exploitative sex; for example:[2]

The closest meaning of arsenokoitai over five hundred years of translation was men who took the active role in non­procreative sex. Arsenokoitai did not define what we would call the sexual orientation of a person; it indicated the role played in the sexual act.

In the culture in which arsenokoitai originated, the meaning was closest either to pederasty or to a man engaged in exploitative sex with a male with some sort of trade or money involved. Such relationships were not and are not equal-status relationships; one partner has power, while the other is being used and degraded. Furthermore, no one knows the fully nuanced meaning of arsenokoitai, but it is clear from all its contexts that it does not refer to women in any way. Yet, when arsenokoitai was mistranslated to “homosexual,” it immediately, by definition, came to include women as well as men. The translation shift of arsenokoitai from men who engage in exploitative sex with males to “homosexual” referring to both men and women appears to have been “prompted not by criteria of historical criticism”—a respected form of literary scholarship—“but by shifts in modern sexual ideology.”[4]

Malakos is associated with the traits of women as women were seen in the ancient world: morally weak, given to unnatural vices, lazy, unchaste, lustful, whorish, impure, and taking a submissive role in sex. Malakos was used to characterize men who lived lives of decadence; partook in excesses of food, drink, and sex; were weak in battle; prettied themselves for sexual exploits with women; or even were simply too bookish. Additionally, men who fell deeply in love with women and lost control of their passions or neglected their business pursuits were thought to be effeminate.[5]

The historical meaning of malakoi presents a modern translational problem because the most consistent and best historical translation of malakoi really is “effeminate”—but not our modern understanding of “effeminate.” So when the 1552 Douay-Rheims Bible and the 1901 American Standard Version translated malakoi as “effeminate,” the word still included the sense of all the ugly traits thought to be associated with women; it had nothing to do with gay men. Nothing. Today “effeminate” means “having or showing qualities that are considered more suitable to women than to men.”[6] The modern word doesn’t carry the baggage of ancient negative views of women. But Paul was not writing to a world where women were of equal status to men, a world where to be a woman, or to be like a woman, was to be honorable, or to behave honorably. In light of all this, the best modern translation of malakoi would include in its meaning an indulgent or excessive disposition which may at times include sexual excess.

By now it should be clearer why translating malakoi as “homosexual” is completely inaccurate. There are several translators and modern Bible commentators who compound these inaccuracies by further asserting that malakoi refers to the passive partner in gay sex and that arsenokoitais describes the active partner in gay sex. This appears to be a highly biased translation of words to suit modern conservative presumptions.