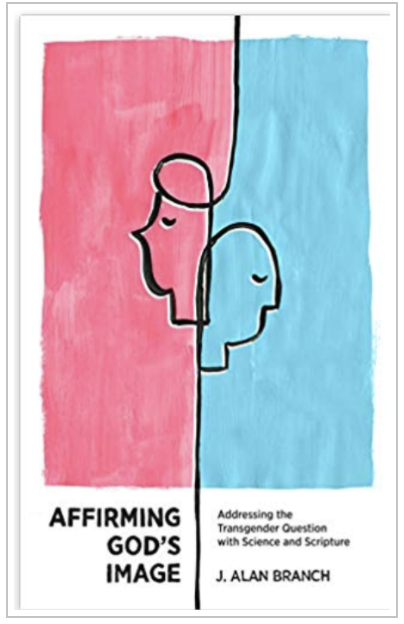 “Affirming God’s Image: Addressing the Transgender Question with Science and Scripture” written by J. Alan Branch (Southern Baptist, professor or Christian ethics at an SBC seminary, and staff member of the SBC’s Ethics and Religious Liberties Council), is the sixth such book I have read in the past six years which fall in the Christian genre of anti-transgender books.

It is clear in reading Branch’s book that he lacks personal relationships with those who are transgender, particularly those who are both transgender and Christian. Rather than doing the work that requires one to empathetically listen to those whose lives are unlike his own, Branch makes the same mistakes all his predecessors have.

Branch uses Genesis 1 as the sole template for what is “acceptable” for what is male/masculine and female/feminine. The Bible is not a science book, it is not a medical discourse on the human body and gender, it should not be used as such. Anything out of the “perfect” structure (in this case, intersex people, transgender people, gay people) is conveniently dismissed by “the fall.”

Branch misuses and misrepresents studies. There is one study that is repeatedly misused and was predictably cited and misused in this book—the 2011 Karolinska Institute in Sweden study on transition satisfaction. Using this study, Branch, and other authors, claim that trans people had high rates of suicide years after undergoing surgery. However, these assertions do not reflect the findings of the author of the study, Cecilia Dhejne. Dhejne has repeatedly asked people to stop misusing her research “to support ridiculous claims.” Dhejne has written articles and spoken at conferences about those who distort her research.

The accusations of abuse, misrepresentation of data, and truth of Dhejne’s findings are easy to locate, yet, those on the conservative right, including Branch, continue to misrepresent Dhejne’s study to support their anti-trans narrative. What is true, as stated by Dhejne and others, is that transgender people do benefit from transitioning. The typical result of transitioning is that most people flourish.
Predictably as well, Branch gestures toward Body Identity Integrity Disorder, a condition in which persons desire to have healthy limbs be amputated. Medical professionals never make this connection to those who are transgender, but it is a favorite analogy summoned by uninformed Christians who desire to paint transgender people in a negative light.

Likewise, followers of Gnosticism, a heretical movement from the second century, is likened to those who are transgender. Gnosticism espoused the need for a special knowledge from God that released a person from their material earthly body seen to be evil. Gnosticism believed in a tension between the evil body and good spirit.

Calling transpeople gnostic, according to the 2nd-century model, assumes those who are transgender see their spirit (soul, psyche, inner sense of gender) as pure, but their material bodies as evil. Second century Gnostics kept the two realms (good spirit and evil body) apart so that they might enjoy greater spiritual and emotional well-being.

It is actually quite the opposite for transgender people. When they do transition and align gender (spirit/soul) and biological sex (body), they feel more integrated, not less.

Along the same lines, Branch attempts to connect the cult of Cybele from first century Rome as having “some striking similarities to the modern male to female transgenderism, the parallels have limitations. It is not clear how many of the Galli (priests dedicated to Cybele) emasculated themselves and cross-dressed merely out of misguided dedication to Cybele as opposed to men who may have experienced what today is clinically described as gender dysphoria. Thus, I referred to their behavior as transgender-like in order to acknowledge the differences. The final behaviors are very similar. If we could travel back in time to early Christians in Rome A.D. 64 and describe modern transgender is up to them, they probably would have said, ‘We don’t have the word ‘transgenderism,’ but we think we have seen something very similar to what you are describing.”

Branch gives his shortened view of the history of transgenderism. It is woefully lacking. What we understand about human sexuality and the social and sexual roles of men and women is a painfully slow progression of theories and assumptions. We are still en route to understanding more fully those who are not amongst “the normative.” There was a time in the past century when the sexual behaviors of the majority of married heterosexual couples were seen as perversion. We’ve “normalized” what was once unthinkable and even unspeakable (i.e: enjoyment of sex, participation in non-procreative sex) because heterosexuals are the majority while continuing to demonize those who do the exact same sexual practices but are not heterosexual.)

Branch instructs readers to not only use a transgender person’s birth name (their “dead name”) but to help shift them back to presenting and living as their natal sex. This is completely opposite to the instruction of medical health care professionals. The emotional damage inflicted by this noncompassionate behavior is well documented by long-term research conducted by the Family Acceptance Project. Again, theology devoid of listening to people is not only bad theology, but it is also destructive and inhumane.

Branch dedicated several pages to Allyson Robinson’s story and consistently, dismissively, and insensitively, misgenders her as he/him. He equates Allyson’s questioning of her prior understanding of gender in the Bible with the “distinct echo of Satan himself in Genesis 3:1.”

Allyson is a personal friend. I deliciously can imagine Branch doing his severely broken and offensive theology toward Allyson in a one-on-one conversation. Branch would come up horribly short and wrong. His theories may work in isolation at his keyboard. They would be decimated in conversation directly with Allyson.

Rather than engaging real people, Branch is more comfortable with theoretical and numbers games. As he rightly writes, we do not know the cause of transgender conditions. Not possessing THE reason of the cause is not license to dismiss. Experts who study the brain tell us we are likely several decades from adequately understanding the brain and the science that will support gender dysphoria.

Few people that are as uninformed about the meaning and context of Deuteronomy 22:5 and use it to condemn “cross-dressing,” yet Branch does exactly that. Look to Hebrew scholars as to their understanding and context rather than imposing desired results on Scripture. The Feast of Purim, in the Jewish culture, should inform one that dressing in the clothes of another is not an “abomination.” The intention of why one was doing so in the passage (to commit adultery or to hide during a time of battle) is the deception warned of in the scripture.

Again to context and time—Branch writes that male-female binaries are affirmed in the New Testament. Our current understanding of male-female would be utterly unrecognized in first century Rome. Study of the snail-paced progression of understanding human sexuality utterly counters what Branch and his colleagues imagine as understood by first-century writers. It is sheer academic laziness that allows a person to comfortably impose twenty-first-century understanding on first-century texts and then emphatically state what “God means,” or “the Bible clearly says.”

How should the Christian respond to those who come to our churches that are transgender? “Christians should speak into this chaos with bold, radical love. Our love should be modeled on the love of Jesus Christ, who offered the woman at the well living water so that she would never thirst again, yet confronted her sin with compassionate firmness.” A move of bold and radical love would more likely involve allowing our own arrogance and sureness to be disrupted by the seeing, listening, and hearing of the story of people unlike us rather than pummelling with telling.

“Affirming God’s Image: Addressing the Transgender Question with Science and Scripture” is just another rehash book on why transgender people “need” to conform to natal sex to please God or be in relationship with Him. Branch clearly has little or no personal experience with those who are transgender and Christian. There are superior resources available that will help readers to gain informed views of transgender people. Search them out. You might even look online for videos of Allyson Robinson’s messages, sermons, and articles. Listen to those who are actually transgender, not yet another author who is imprisoned by his own biases and severely limited knowledge.