Ryan White, a 13-year-old hemophiliac middle-schooler in Kokomo, Indiana, was diagnosed with the disease. He had contracted HIV years before in a blood transfusion and, once diagnosed, was given six months to live. He was one of the first hemophiliac children in the United States to suffer from AIDS. It is estimated that between 1979 and 1984, 90% of all hemophiliacs were infected with AIDS due to the contaminated plasma from Haiti in the early 1970s.

When Ryan had recovered from the operation that led to his AIDS diagnosis, 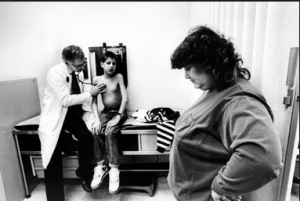 one-third of the parents and fifty teachers at his school reacted by signing a petition to ban him from attending. The family, guided by concerned legal counsel, challenged the Kokomo School Board for Ryan’s right to attend public school. National media attention on the court battle helped expand the public conversation about AIDS and its transmission and catapulted the well-spoken young man into the spotlight. Celebrities began to socialize with Ryan White, helping to further de-stigmatize HIV/AIDS. 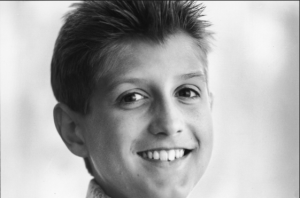 The family won on an appeal, and Ryan was allowed to attend school. But when shots were fired late one night into the family home, they made the decision to leave Kokomo and move to Cicero, Indiana. In August 1987, Ryan was welcomed to the high school there, where he remained a student until his death in April 1990, one month shy of his high school graduation.

Ryan White’s life in the spotlight during the few years between his diagnosis and his death is partially credited with increasing public awareness and dissemination of accurate information about HIV/AIDS.

Also in 1987, utterly out of step with the changing public understanding about the causes and transmission of HIV/AIDS, Jerry Falwell delivered a message about AIDS on his national TV show. It was devoid of compassion and filled with damnation. Falwell warned that God was bringing the end of the sexual revolution through the AIDS epidemic. In his sermon “How Many Roads to Heaven?,” Falwell stated, “[Gay men] are scared to walk near one of their own kind right now. And what we have been unable to do with our preaching, a God who hates sin has stopped dead in its tracks by saying ‘Do it and die. Do it and die.’”

By then, 20,139 Americans had died of AIDS-related illnesses. The Moral Majority opposed federally funded research to find a cure for AIDS. Rather, fundamentalist politicians and religious leaders called for punitive measures under the guise of fighting AIDS. Various people demanded quarantines, the reinstatement of sodomy laws, or nationwide programs to tattoo and mark people who had AIDS.

Interestingly, sexual and financial scandals erupted within the ranks of these vile televangelists during the very same time. Public distrust of televangelists increased, and they began to lose their dominant voice; even the Moral Majority lost its relevance and shut down in 1989. 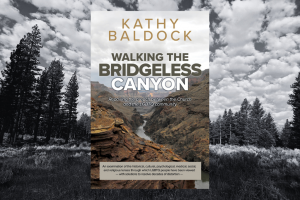