In September 2012, I attended the inaugural conference for Restored Hope Network (RHN) at Sunrise Community Church  in

Sacramento, CA. The forming committee for RHN had been gathering for several months in response to the belief that Exodus International was straying from its roots.

This is a complicated topic, and will be presented as several posts. In his keynote address entitled “Back to the Future,”  RHN forming committee member, Frank Worthen, framed the split from Exodus International. RHN had been birthed in an effort  to “reestablish what we thought we had established 37 years ago.”

Please read all the sections. They support one another and, together form an overview of my perspective of the dynamics of what has happened and is happening in the traditional Christian church ministry to the lesbian, gay, bisexual and transgender (LGBT) community.

Frank Worthen, prominent member of the forming committee of the newly inaugurated Restored Hope Network (RHN), is now 83. One would expect his skewed views on homosexuality to have reflected his own life experiences from a time and culture where very little was known about sexual orientation.

When Worthen would have been coming into puberty in the early 1940s, gay people were not socially “out”; they gathered mostly in bars and hidden places. They were outcast by the government, families and churches, and their orientation was seen as perversion.

Finally, in 1973, the American Psychological Association (APA), declassified homosexuality as a mental disorder and reclassified it as a normal variation of human sexuality.

That was forty years ago. Forty years ago. No one would ever use forty-year-old information, especially in a scientific field such as psychology, to approach or solve issues today.

Today, you could never start a ministry to the gay Christian community  using psychological assumptions from the early ‘70s, or would you? 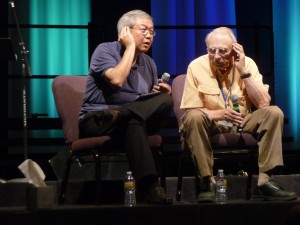 Last week at Sunrise Community Church in Sacramento, CA,  the theories and beliefs I heard were indeed those of people stuck in the past. For RHN, sadly, not much has changed. Merging bad psychology with the beauty of truth in the Word of God still cannot validate the resultant beliefs of this group.

This is what I heard at the RHN conference. I am intentional in not eliminating what I did hear or inserting what I did not hear about sexuality at RHN. I took deliberately detailed notes to remain faithful to to this purpose.

A session called “Restoring Hope for those with Same-Sex Attractions,”  featuring Worthen and Dr. Melvin Wong was very revealing. Wong identified himself as a 20 year Christian clinical psychologist in the Bay Area. He shared the stage with Worthen for an exchange of ideas, and to field audience questions.

I checked Wong’s professional qualifications  after the conference. His statements so shocked me that I wondered how he could possibly be licensed. Wong is not accredited by the APA; the program in which he studied and was licensed is also not APA-accredited. And worse, Wong is affiliated with the National Association on Research and Therapy for Homosexuality (NARTH).

In 2006, the APA repudiated NARTH stating:

[box]“For over three decades the consensus of the mental health community has been that homosexuality is not an illness and therefore not in need of a cure. The APA’s concern about the positions espoused by NARTH and so-called conversation therapy is that they are not supported by the science. There is simply no sufficiently scientifically sound evidence that sexual orientation can be changed.”[/box]

These facts were not stated as part of Dr. Wong’s introduction. To the audience, it appeared that we were being given insights by a mental health professional and an “expert on homosexuality.” (All the answers are paraphrased as best I could quickly take notes. Any mistakes are not intentional or malicious.)

Question 1: “How come people who start with the Lord can go back to the ‘gay lifestyle’?”

Worthen: Any time people change something like drugs and alcohol, there will  be a failure rate. They are not whole heartedly repentant for their sin. There probably was no moment with Jesus of conversion. There must be a particular moment in time to surrender; they need to be able to name that moment. 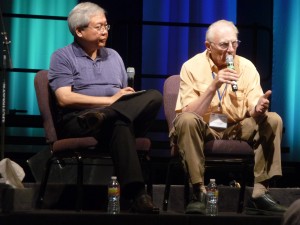 Wong: There must be a willingness to change. People who struggle usually do not have that God-moment. The power of transformation is in Scripture and the #1 thing that is needed is the will to change. In this culture, there are many distracting voices like being gay as “inborn” or “reparative therapy can harm you.” It still comes down to theology and doctrines, so at the end of the day, it is about will.

Worthen: There must be a decisive decision that says “Come hell or high water, I am going to get out of this thing.”  Indecision and immaturity are marks of the gay lifestyle. We used to have clients fly into our program and stop in SF for a last fling in the Castro. Everything is trying to pull them away from God and into the lifestyle.

When I first made the decision, I had friends trying to pull me away from God and drag me into the lifestyle.

And don’t think this is the end of sex for your life, that you could never do anything with the opposite sex. Marriage is God’s norm for life. God is not calling you to a life of celibacy; it is possible that marriage is in your future.

Wong: Many people have tried to keep one foot in the gay lifestyle. You must cut off completely from gay friends.

[box]You must be totally cut off. You need to say “No more phone calls. No more gay parties. No birthday parties.”  Even birthday

parties will turn into gay parties. Those friends are destructive friends, their main aim will be to get you back among them and do destructive things.[/box]

(Interesting side note. The Worthens have a gay son who for years lived with his partner  in the apartment beneath the Worthens. I assume the birthday parties did not evolve into “gay parties.”)

Identity has much to do with it. You must give up the gay identity. At a conference 15 to 20 years ago, a young man stood up and told me he had been celibate for two years and was gay. I told him, “That is not the life God wants for you. If you keep that identity, you will go back into the lifestyle.”

(I was sitting next to  Dr. Robert Gagnon  while this was going on and he was nodding and saying “yes” in agreement.) 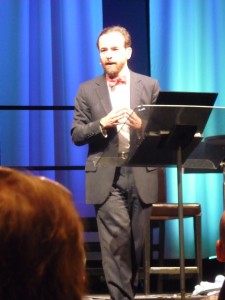 Then a very frustrated Mom asked a question (Oh, woman in the black and white shirt and the follow-up from the Mom in the orange sweater–I could not reach out to you because I was honoring my positions as guest. If you read this, please get a hold of me.): My son is celibate and gay and I am confused. You say that is not good enough?

Worthen:  Being celibate but gay is not a healthy identity. God does not want to leave him there.

Question from Anne Paulk: “Is ‘gay’ a true identity?”

Worthen: I do not think people are born that way. There is no proof. The identity is a label, not an identity. Gay is a label put on our lives by ourselves or others.

Question from the Other Mom in the orange sweater:  My son is struggling and says he is gay; why do they call themselves gay?

Wong: There is a potential temperament that is socially cautious; it is not a personality, it is a temperament. And then people nurture that to be gay.

Worthen: This is an issue of attractions. There are three kinds: 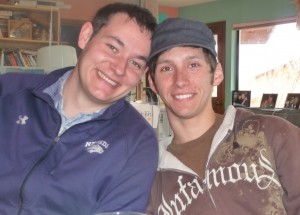 Wong: The attraction is about sexual attraction. In the same-sex community, is is “self-repair” or completion. There is a body envy because there is a body discomfort, a manhood wound, a masculine deficit.

Even in healthy families, the manhood wound can be perpetuated through molestation or the stimulation of the genitals. Body envy of another person will be what a person needs to be repaired. I am calling this “eroticized self repair.”

Heterosexuals have another stuff, the marriage theory. The spouse complements you; the man and the woman complement each other.

The man says “you have what I do not have,” and the woman says that of the man.

The repair process becomes strong in puberty and it is there that it becomes eroticized. So we need to attend to the manhood wound. There is a hunger. If we repair it, then there will be a heterosexual attraction. Lust is a desperate attempt to reach completion.

Andy Comiskey: So we need to interpret the need, even in the envy and lust, and learn to navigate this rightfully?

Wong: If we don’t have the needs met, we need to find a way to meet them healthily. 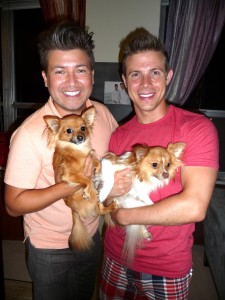 Absolutely none of this is in alignment with the modern science of psychology. None of it. Neither NARTH nor Wong are accredited by the APA. What they present as truth is utter junk.

In order to affirm what is not true in science, RHN needs also to distort the reading and understanding of the Bible to justify all this lunacy. Bad science supports twisted theology and twisted theology supports bad science. Neither can stand in integrity without the other. It has to be both or the structure will collapse.

Exodus leaders could see no one was changing orientation and they admitted it. When you apply these overwhelming observations and knowledge to the Word of God, it forces revisiting Scriptures that have been used to support the “gay as perverse, deviant and broken” model. 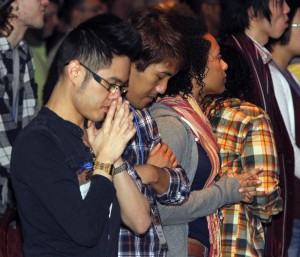 This is where Exodus leadership finds themselves as they shift back to a more gracious approach in reaching out to gay Christians. Even with this effort to correct, the Exodus view of human sexuality and homosexuality is still not in step with science and modern psychology; they view homosexuality as “broken sexuality.”

And worse, RHN remains stuck in the ignorance of the ‘60s about what it means to be gay. The familiar definition of “insanity” is doing something over and over again and expecting different results. Change in orientation is not happening. Of course there will be some “success stories.” Behavior modification is like that. I can show you videos of dogs in goggles riding surfboards, but my dogs don’t wear googles or ride surfboards. 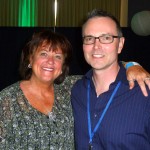 Today, most of us have gay friends. Many of us are blessed with wonderful gay Christian friends in whom we see the Spirit of Christ. And others of us are in relationship with partnered gay Christian friends doing ministry work and pastoring.  There are millions of witnesses to the life and spiritual growth of gay Christians in affirming faith communities, and there are millions of witnesses to the destructiveness of ministries like Exodus and RHN.

Many of us werehopeful as we watched Exodus shifting away from the hardline “Change is possible” lie. But in the lucrative space created by that shift, the Restored Hope Network rushed in.

For lesbian, gay, bisexual and transgender Christians, there is hope. Find a community of believers  that love you and will encourage authentic spiritual growth in you. Your hope is in Him, not the Restored Hope Network.

PART IV: Back to Relationship | Gay Christians in the Church