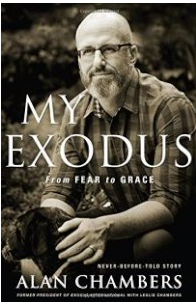 Alan Chambers’ newly released book—My Exodus: From Fear to Grace—written with his wife, Leslie, is self described as “ . . . simply our story. It’s a story about our parents, our childhood, our coming of age, our marriage, and our journey out of a system of beliefs driven by fear and rules,” (p. 15).

Chambers has played a significant role in the faith and sexual orientation landscape. From 2001 until 2013, he was the president of Exodus International, a Christian umbrella ministry overseeing religious-based gay conversion to heterosexuality. Exodus’ primary target groups were: Christians who identified as lesbian or gay, their families, and paraministries or churches with outreach programs to gay people and their families — all who were seeking a way “out of homosexuality” towards heterosexuality, or as a compromise, celibacy.  Beginning in the early 1980s, Exodus member ministries adhered to an ideology which combined long discarded psychological theories about reparative therapy with a spiritual component.

When Chambers took lead of the organization in 2001, he introduced several changes including a political reach. Though he is the primary agent through which Exodus inserted and escalated itself into national policy concerning the LGBT community, Chambers dismisses his organization’s destructive influence in a single sentence: “We dabbled in the political arena, believing we could make a difference,” (p. 187).

It is from his perch at Exodus that I, as a reader, had hoped to gain insights and understanding. I thought I would eventually read about Chambers’ accountability, remorse, and apology for the severe damage, abusive expectations, and wrongful teachings that flowed from Exodus into the lives of LGBT Christians and their families, and in turn permeated the evangelical church world.

This is what I wanted Chambers’ book to be about. But it was not.

My Exodus is, as clearly stated by Chambers, primarily an account of his and his wife’s journey out of lives long controlled by performance and fear. It is on page 177 of this 222-page book that is My Exodus, that Chambers finally gets to the subject that interests me and will likely interest most of those who are considering reading the book: Exodus International. In 12 short pages, the narrative covers the creation of Exodus and Chambers’ election as president of the organization. Then, in a span of five paragraphs, Chambers fast forwards to 2011.

Chambers writes of the 2011 Exodus Conference, one attended and filmed by reporter Lisa Ling. The subsequent televised report documented the beginning of irrelevance for Exodus as an organization.

Up next is Chambers’ account of the 2012 Gay Christian Network (GCN) Conference, at which he made an appearance while still executive director of Exodus. While participating in a panel discussion led by GCN executive director Justin Lee, and which included former Exodus ministry leaders, Chambers admitted that the “majority—meaning 99.9 percent of them (homosexuals), have not experienced a change in their orientation.” In referencing the time immediately following the  panel discussion, Chambers writes, ”Leslie and I stood just offstage and greeted people for hours. Folks waited in line to thank me for coming. A few needed to tell me how wrong I was and how much they had been hurt, and nearly every encounter ended with a hug,” (p. 195).

I was in attendance at that GCN conference and was seated on the front row, listening and live-blogging the event that night. Afterward, for the next three hours, I then remained close by witnessing dozens of exchanges. Chambers elected to cover the emotion-laden period in three sentences. Sadly, he missed an opportunity to share with his readers the depth of the Exodus-induced pain shared in those conversations.

One such conversation I will never forget. Ben, in his mid-20s, had tried for several years to “leave homosexuality” with the help of an Exodus ministry. The process had caused intense pain and destruction. Ben and his mother, Susan, a licensed therapist, approached Chambers. Ben told Chambers his story and added that, although his flesh wanted to punch Chambers in the face, Jesus mandated forgiveness of and prayer for his enemies. Then Ben and his mother grabbed Chambers’ hands and prayed for forgiveness and blessing upon Chambers.

Similar heart-wrenching scenes unfolded throughout the three hours, yet we read just three sentences about the experience.

After appearing at GCN, Exodus began to unravel. Here is another place where more details would have been welcome.

Other Exodus leaders and supporters were angry at Chambers “99.9 percent” statement. Chambers had not only acted without the consent of his board by attending the conference, but financial impact of his decision were felt beginning the very next day. Funding from major supporters instantly and dramatically dried up. Both Chambers’ unilateral decision to attend the GCN conference and the subsequent dwindling financial resources were major contributors to the end of Exodus. Chambers neglects to mention any of this in My Exodus.

Near the book’s end,Chambers tells of a May 2012 meeting orchestrated and filmed again by Lisa Ling, this time with ex-gay survivors. The meeting became a pivotal event aiding Chambers in his decision to close Exodus.

The final chapter, entitled “White Couches,” is a fitting conclusion to a book that, as we had been warned from the start, is “all about” Alan and Leslie Chambers. The two couches, purchased for a good price at an estate sale, had been present at the relational center during much of the Chambers’ family interaction. Following the end of Exodus, the Chambers’ financial stresses had forced them to leave the home they loved, rent it out, move in with in-laws, and put the two white couches into storage “awaiting a reunion” when they will be “older, wiser, and breathing more easily than in the season that led us to pack them away,” (p. 222).

The last sentences of the book reflect Alan and Leslie’s growth, sacrifices, and losses.

Upon reading this, I let out an audible scream of utter frustration and exasperation!

What about the losses of countless gay Christians whose lives were devastated by Exodus?

What about the frustration and pain of parents of gay children who held unrealistic and unhealthy expectations hoping their children would become straight?

What about Christian leaders who even now continue to adhere to long-dismissed psychological quackery merged with a twisted theology once promulgated by Exodus?

Okay—why should I have been so utterly disappointed in My Exodus?I had been told from the onset the book was about Alan and Leslie Chambers and their lives.

What a missed opportunity My Exodus is. Chambers has insights about the success, failure, and lessons of Exodus. The Christian church, especially more conservative segments, is in a pivotal time in history following marriage equality. We are just on the cusp of significant conversations as to how LGBT Christians will be treated and received. Chambers’ words could have played a role in that dialogue.

Perhaps it is too soon in Alan Chambers’ journey for him to first realize the depth and magnitude of the destructive impact of Exodus under his leadership, and then to make appropriate and necessary amends. Chambers does seem to be making more expansive and gracious comments about gay people in interviews about his book, but they are not included in his book.

Chambers has stated that 24 publishers sought him out to write a book after the closing of Exodus. He made the final choice on who to go with. For a man who says he never again wants to be “edited” in his thoughts, going with a publisher such as Zondervan is an interesting choice. I speculate that Zondervan, a Christian publishing house, would have never have allowed positive commentary about gay people in romantic or sexual relationships.

If you are a gay person who has participated in an Exodus-related ministry, you will likely not find healing in Chambers’ writings. Sadly, and literally, the book is all about him.
In 222 pages, readers learn Chambers has been, and still is, same-sex attracted. Yet, he refuses to label himself gay or bisexual. He terms himself “Leslie-oriented.”

If Exodus-impacted gay Christians give My Exodus to their parents hoping they might “get it,” they will likely be disappointed. I imagine hardline parents would resolutely encourage their children to hang in there until they find their own “Leslie.”

In Chamber’s Leaving Homosexuality: A Practical Guide for Men and Women Looking for a Way Out (2009), he wrote, “ . . . the opposite of homosexuality isn’t heterosexuality; it’s holiness.”  For those of us who agree with every professional medical and mental health care organization in the U.S.that homosexuality is a normal variation of human sexuality, Chambers’ statement is not only offensive to our intelligence, but also borders on spiritually abusive to the gay Christian community.

Now, however, we are asked by the author to allow him to sidestep the issue of his own sexual orientation and not label himself. This seems rather disingenuous. Chambers, who led a ministry for a dozen years which focused on and distinguished the worthiness, brokenness, and spiritual lives of tens of thousands of people by their homosexual orientation, conveniently does not address his own orientation by finding a new category — “Leslie oriented.”

While I acknowledge and honor the uniqueness and individuality of personal stories, Chambers’ historic role in damaging LGBT people and contributing to the ongoing religious discrimination against LGBT Christians is of greater interest to me—and likely to potential readers—than what Chambers and Zondervan thought this book should be.

If readers expect more, as I did, they will likely be disappointed.

However, if potential readers are curious about Alan and Leslie’s childhood, youth, dating and marriage, My Exodus may satisfy such expectations moderately, for the book is not particularly well-written.