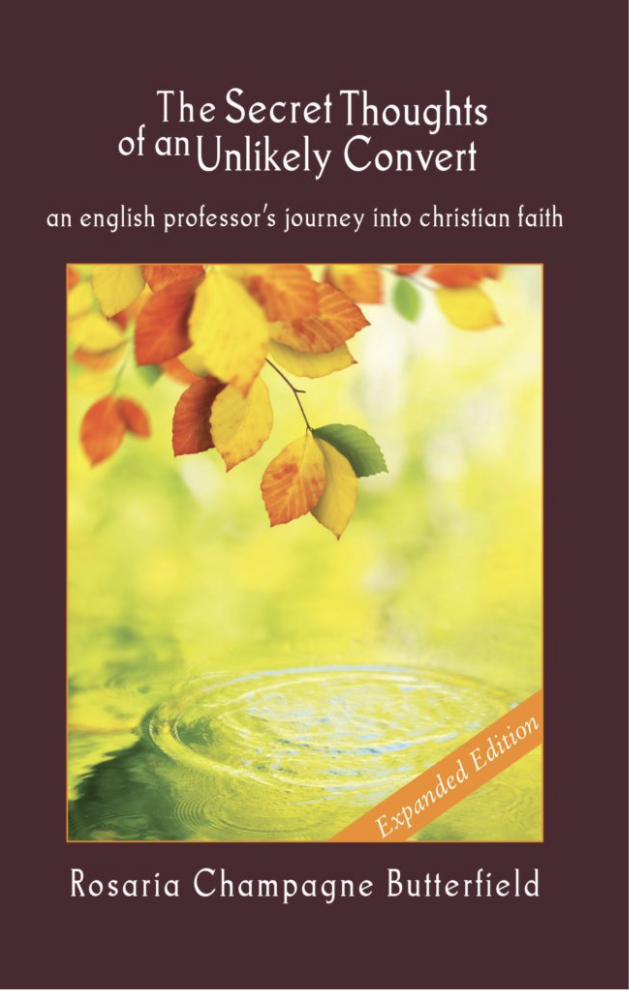 Category: Uncategorized
Genre: Damaging to LGBTQ Community
Publisher: Crown & Covenant 2012
Go to this Review on Amazon & Vote “Helpful” at end of the Review

Over the past several years, “The Secret Thoughts of an Unlikely Convert” (Crown & Covenant, 2014) by Rosaria C. Butterfield has been positioned by evangelicals and religious conservatives as one of the go-to books for conversion from homosexuality to heterosexuality.

Among conservative Christians, Secret Thoughts is most frequently positioned as a book of sexual identity and the conversion story of an academic radical feminist lesbian to a conservative straight pastor’s wife. Butterfield writes: “My story is not representative or diagnostic. If people are using my testimony in this way, they should stop (and I will tell them that, if you need me to.)” (p 171)

Yet, ironically, this book is used in precisely this manner. It has been suggested and given to countless Christian lesbian friends with the hope of encouraging them to stop being lesbians through a similar conversion experience.

I find the popularity and use of this book to be quite confusing. Even Butterfield writes about those who might read her book: “I figured that about twenty people in my small, unknown denomination would purchase it, in the same way that people might buy a church cookbook.” (p 176) I agree.

I first heard Butterfield speak at the Southern Baptist’s Ethics and Religious Liberties Council (ERLC) conference in 2014. The author and venue in themselves are an odd coupling. Typically, evangelicals and conservatives, such as Baptists, tend to put those with like-minded theology at the front. Butterfield is a Reformed Presbyterian, a mainline Protestant denomination. With no equivalent voice in the conservative world. However, Butterfield’s story seems to conveniently fill the void and need of great conversion story of the seemingly most hardcore of situations: radical feminist lesbian to a conservative straight pastor’s wife. After all, if it can happen for Butterfield, it can happen for any other lesbian, especially those who seek to follow God.

None of us gets to label another person’s sexual identity; that is a personal issue. However, it is highly problematic and simultaneously convenient when conservatives completely ignore those who are bisexual (having a natural attraction to men and women). With the consideration of bisexuality brushed aside, it makes the conversion story of gay people, typically women, more dramatic and convincing. (I intentionally note women in this comment. The sexual orientation of women has been found to be more fluid and contextual than that of men. See the excellent work of Dr. Lisa Diamond for more information.)

Sadly, it is has become expected practice for conservative, non-inclusive Christians to ignore many facts from the expert medical community regarding to human sexuality, including bisexual orientations.

Every major professional mental health care organization in the U.S. agrees there is a spectrum of naturally occurring human sexuality from homosexuality to heterosexuality. It is also agreed by these professional organizations that people cannot change their natural orientation, and attempting to do so is mentally and emotionally dangerous, and is frequently associated with physical negative consequences.

Yet, Butterfield herself calls the concept of unalterable sexual orientation: “the bluster, unfounded, and uncharitable declarations of secular psychology.” (p 169)

Butterfield is strong in her condemnation of homosexuality: “Sexual sin is predatory. It won’t be “healed” by redeeming the context of the genders. Sexual sin must simply be killed. What is left of your sexuality after this annihilation is up to God. But healing, to the sexual sinner, is death: nothing more and nothing less.” (p 83)

With such assurance and her background, I expected Butterfield to present a somewhat academic, even if abbreviated, explanation of her conclusion that “homosexuality is sin.” (p 169). After all, Butterfield writes: “My training prepares me to think highly about how a text is assembled and to respect its authority.” (p 90) What a disappointment that Butterfield did not bring her academic skills to the task. It more of the cliché approach considered to the “high view” of Scripture: the Bible says it and I believe it.

I find it both disingenuous and arrogant to imagine that, simply because there are those of us who do not believe the same-sex sexual sin in six Scripture passages is not referring to homosexuality, that we cannot and do not hold a high view of Scripture. Perhaps those who are more diligent about text and context and allow themselves to be informed by what is known about human sexuality are taking the high view?

While the explanation is long, I lay a foundation for a possible high view of Scripture that is inclusive of LGBT Christians in the first ten chapters in my book “Walking the Bridgeless Canyon.”

Simply put, the same-sex behavior presented in the Bible depicts man on boy sex, sexual excess, and/or lust, or in the case of Sodom, rape. In ancient cultures, we always see either an age or power differential between the men and his sex partner.

Two people of the same-sex, of equal social status, in mutually loving, consensual, monogamous relationships were not culturally visible until the early 20th century.

The biblical texts referencing same-sex behavior were written to particular audiences in a particular context of time (14th century BC and 1st century AD). No one in the 1st century could have understood the concept of same-sex relationships. Jesus, though certainly the Son of God, operated as a person within His culture and time. He wouldn’t have said anything, either for or against, same-sex couples.

I also found it interesting that Butterfield, a former professor in Syracuse’s Center for Women’s Studies, both referred to a “dear friend of mine who lived full-time in drag” as a “transgendered (sic) woman” and then subsequently, and almost exclusively thereafter, as a “drag queen.” Sure, Butterfield was an English professor and involved in feminist studies, but what was known about sexual orientation and gender identity in her teaching days in 1991 has greatly expanded. She is neither an academic nor well informed in the field of human sexuality.

I find the greater strength of Butterfield’s book to be her account of conversion from atheist to Christian through the long, involved friendship, care and hospitality of a Reformed Presbyterian pastor and his wife. In fact, the second part of the book focuses on hospitality, worship, adoption and homeschooling. This is another oddity that it has become the go-to book on sexual identity.

Those tempted to pass out this book to LGBT people have likely not spent time in relationship with gay and transgender Christians and non-Christians. If they were to read the book for their own spiritual growth, rather than as a quick fix to someone else’s “sins,” they would likely not even hand out the book. Rather, they’d invite those who are different to them to dinner and invest in ongoing friendship.

Please consider this. Lesbian Christians, the primary target market for Secret Thoughts, have their own testimony and conversion stories. Though the conservative church may not validate their status before God, Galatians 2 and 3 settles it.

I read the Expanded Version of Secret Thoughts. In it, Butterfield takes a decidedly more aggressive tone in the newly added appendix.

The expanded appendix seems to be in compliance to those who have elevated this book for their own motives and their need for the great conversion story. They see to have hijacked Butterfield’s book and used it to their own ends. Homosexuality-obsessed, conservative Christians have smothered Butterfield’s more gracious tone and given her a new role – bring the message of the possibility of conversion from gay to straight.

I believe what she set out to write, and by her own admission, was a book she did not expect to be widely read – a book about the richness of conversion, the loving care of adoption, the healing experienced in worship, and most significantly, the generosity of hospitality.

By sitting together, in an attitude of genuine hospitality and empathy, conservative Christians might find the powerful and authentic witness of Jesus in those they’ve ignored and talked about, instead of with.

If the potential reader/purchaser’s intent is to shame a lesbian Christian into being straight, perhaps consider this more hospitable option. Take the $20 the book would cost and take a Christian lesbian out for a meal and listen to her story. If that is too bold a step for you, start with gay Christian Justin Lee’s personal story told in  Torn: Rescuing the Gospel from the Gays-vs.-Christians Debate , or read the many stories of gay and transgender Christians in the last five chapters of my book,  Walking the Bridgeless Canyon: Repairing the Breach Between the Church and the LGBT Community .

[I gave this book three stars for the good in its content on hospitality, worship and adoption.]