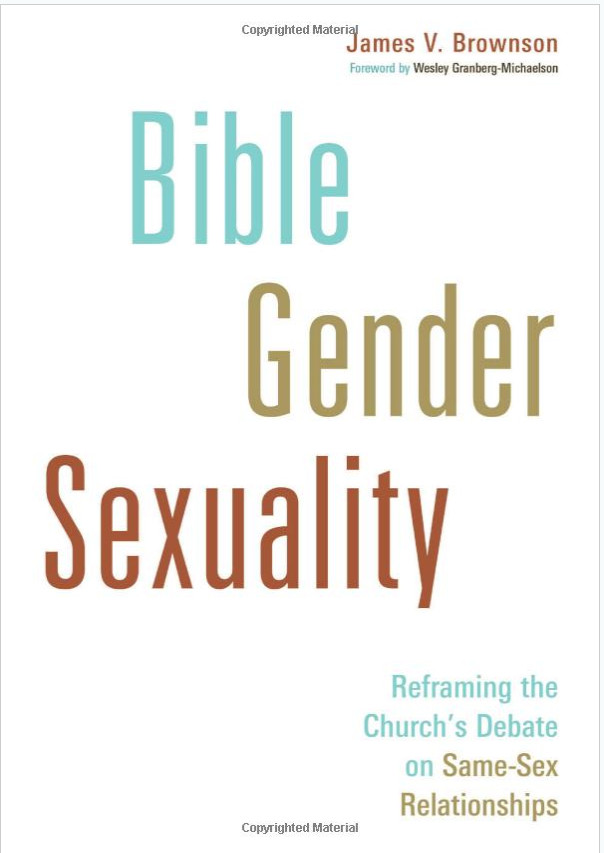 Category: Uncategorized
Author: Prof. James Brownson
Genre: Recommended
“Bible Gender Sexuality | Reframing the Church’s Debate on Same-Sex Relationships” by Prof. James Brownson (2013) Prof. James Brownson has taught New Testament Theology at Western Theological Seminary, New Holland, Michigan, for over 30 years. When his 19 year old son came out as gay, Brownson challenged himself to revisit the Scriptures believing that his own child was both gay and a Christian. This book is the culmination of his decades of Biblical scholarship, relationship…

“Bible Gender Sexuality | Reframing the Church’s Debate on Same-Sex Relationships” by Prof. James Brownson (2013) Prof. James Brownson has taught New Testament Theology at Western Theological Seminary, New Holland, Michigan, for over 30 years. When his 19 year old son came out as gay, Brownson challenged himself to revisit the Scriptures believing that his own child was both gay and a Christian. This book is the culmination of his decades of Biblical scholarship, relationship and an openness to God’s leading.

Brownson methodically presents questions and information the church has neglected to productively consider in the last 40 years. The lazy approach in the use of words on the page to understand verses in the Bible has dominated the “can you be gay and Christian?” conversation since the late 1970s. Brownson does an excellent job of examining these difficult verses that have been so carelessly exercised to condemn same-sex relationships, and gay and lesbian people.

One of the primary objections held by the conservative church and political communities is the belief that marriage can only exist between one man and one woman. This has created a strong wall against marriage equality. Marriage, according to Ephesians, is the reflection of God’s covenant relationship with His people. Section 2 of Brownson’s book addresses covenantal marriage within our culture brilliantly.

Brownson deconstructs “gender complementarily,” the Part A into Slot B approach to human sexuality, which has been elevated as a primary reason for marriage and the only “God-approved” sex. If your civil rights hearts says “yes” to marriage equality, and your Christian brain resists, you need to read this book.

Over the years, I have had conversations with conservative pastors in hopes that they might consider the broader view of biblical texts not constrained within the first century Christian culture. It is apparent that many of these pastors have relied heavily upon the writings of Robert Gagnon to support their beliefs. Prof. Brownson tackles Gagnon’s objections with ease. Gagnon, masterful at taking verses, makes suppositions, anoints his supposition as fact and creates “biblical truths.” Brownson skillfully deconstructs Gagnon’s severely anti-gay rhetoric and its stronghold in the Evangelical community.

Screen Shot 2013-09-14 at 4.43.53 PMAny parent or family member of a gay Christian should consider reading Bible Gender Sexuality | Reframing the Church’s Debate on Same-Sex Relationships as an active step to affirm and offer support. The book will help in their own process of approaching church leadership with better questions in the hope of respectful engagement. I am seeing a swelling grassroots movement of parents with gay children rising as a force for positive change in conservative churches. When you tell a Mama Bear that her child is not acceptable, and base that condemnation on flimsy dogma, expect a reaction.

If you are a church leader, or a pastor, and know that a shift is coming, make this the first book you read to challenge your own deeply seeded objections. Bible Gender Sexuality confronts tenets you have likely elevated as truth; those “truths” are damaging people and families you have been called to lead and love. As you guide your congregations in this dialogue over the next few years, please do it wisely and from an informed posture.

Those who know and love LGBT Christians, and do indeed see the Spirit of God reflected in their lives, need to gain a more accurate understanding of what the Bible does and does not say about human sexuality and marriage. Modern traditional objections easily fall to accurate Biblical scholarship in Bible Gender Sexuality.

Over the past eight years of reading in this genre, I have read dozens of books. If I were to pick ONE book, and have it placed on the desk of every conservative pastor in the United States, that book would be Brownson’s Bible Gender Sexuality.

Consider the encouragement of many other reviewers and buy it here now, really now.