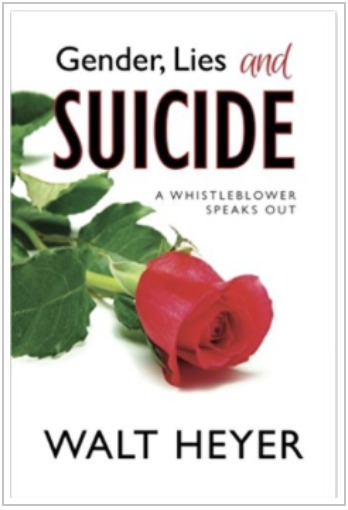 There is not doubt that author Walt Heyer is angry and dissatisfied with his choice to undergo sex reassignment surgery 30 years ago. He feels he was not properly counseled and was actually suffering childhood trauma that altered his view of his gender, and then subsequent adulthood depression. Do I think this is possible? Yes. I do think a person can be damaged from childhood trauma and have a skewed view of gender
.
It is estimated that there are between 32K and 40K male-to-female transwomen in the US currently. Heyer presents his story as a warning and somewhat typical. When I read his book, I immediately likened it to a person who has had a traumatic childhood, entered a life of abuses, and twisted his narrative of abuse, and often destructive behavior with sexual orientation “blaming” a homosexual orientation with childhood dysfunction. In fact, Heyer does PRECISELY that several times in the book:

“There is no proof that trangenders are born.How a child acts out their gender roles will vary depending on the parent or parents, siblings and anyone else who has an active role spending time with the child from a very young age.”

“Parents perhaps contribute to child hood gender nonconformity and narcissistic development. The development of the child’s self identification can be influenced by excessive focus on the child’s look’s, behaviors and gender change suggestions. “

“Have no doubts. Transgender are not formed in the womb but evolve slowly from unresolved childhood family issues, unresolved psychological disorder and other overlooked disorders the activist therapist refuse to acknowledge exist.”

“Many are addicted to the transgender life, no different than the heroin addicts with a needle stuck in his arm, not living a real life at all, just an empty, pain-filled shell of a person looking for a way out.”

Heyer admits he is NOT a doctor or a psychologist, yet he seems to know the TRUTH about what makes people transgender and his theory contradicts ALL modern expert input. This harkens back to the time when homosexuality was lifted out of the DSM as a mental illness as professional began to understand that it was a natural variation of human sexuality . In rushed the people with crazy disproven theories to hold the LGB community in bondage. Heyer does the same thing.

Heyer is convince the “LGBT agenda” is behind all the perceived trans-hype. He does not believe the expert opinions and studies researching transgender suicides are authentic in their intent to communicate a need for change in cultural views of transpeople. Yes, that nasty radical gay agenda is hard at work using “transgender suicides [as} simply collateral damage, useful propaganda in the war to push for “civil rights” laws. ” And, “By lumping in the plight of the discriminated-against transgender with homosexuals, the LGBT can successfully fight for legislation to normalize the way society views and treats the abusive, violent and predatory pornography, pedophilia and sodomy.”

Heyer likens being transgender to a narcissistic disorder. “Narcissism is an inflated self-image and addiction to fantasy an exhibit the elements of self-love, self-involvement and self-destruction.” Yikes, most of the trans people I know are just trying to pass — they are NOT putting big “LOOK AT ME” signs on themselves.

Heyer is convinced that the process to getting approved transitioning is easier than getting a house loan. The impetus of getting rich is the motivation of the doctor. He sees little counseling for problems he call “comorbid” such as depression. He says the Standards of Care are ineffective.

He is clearly disturbed that the state of CA is no longer allowing youth to be counseled in orientation and gender. Of course the legislation to eradicate the counseling of gay youth had another, more insidious purpose: “it will do far more to protect pedophiles from prosecution and leave minors unprotected from adults who prey on them–predatory adult men who engage in homosexual acts with children are sick. The activist pushed for the law because they want it written into the law that sodomy is good, even healthy, even with minors.” Gosh, WHERE the HECK does Heyer get this stuff?!

Heyer seems to have COMPLETELY missed the point of understanding John Money’s work in the second half of the 20th century. Money thought you could mold gender with environment; his standards led to horrific choices of sex. Creating a sex did not make the gender follow. Heyer OFTEN brings up “birth gender,” making a plea that people should get back to it. And here is the important point Heyer misses utterly — that is PRECISELY what trans people are TRYING to do– get back to their BIRTH gender. Heyer believes that lines up with the genitalia. Step boldly into the last 40 years Mr. Heyer and listen to the experts in this field. You can be trans and not be an expert. just as I often come across homophobic gay people, there are certainly transphobic transpeople. Heyer calls the process to get to the gender one feels “surgical gender transformation [that] commit[s}gender suicide 100% of the time. ” He lays out an interesting process of realigning gender and sex that begins with getting alone and honest and crying out to the universe to change your gender. Yeah, okay –that works.

Heyers book is repetitive, written very poorly, revisits what he has already stated over and over and stretched out to make a book. I read it for free, thank goodness on my Amazon Prime account. I was fairly sure that when it was highly recommended by the severely anti-gay, anti-trans Michael Brown of Line of Fire that it would be an emotional, fear-based, non research based, non science based collections of thoughts that would create MORE stigmatizing of the trans community.

I was not disappointed in my expectations.

This is one man’s disappointment with his process. Perhaps he was badly diagnosed. I know hundreds of transgender people and this is NOT exemplary of the process, treatment, lives and outcomes of the people I know. He cites the information from NGALTF from a report entitled “Injustice at Every Turn” and tries to give silly reasons why he thinks trans people are suicidal, underemployed, depressed, and suffer addictions. Of course, the major cause is not societal, religious or familial rejection — no — that could not be it at all. He has a whole new way of interpreting the discrimination of the trans community.

This book will infuriate trans people and those that love and understand them; it is the stuff of TownHall, World Net Daily and the extremists that want to turn transgender people into freaks. One man’s story of disappointment is not typical of the up to 40K MTF in the US — perhaps he needed more counseling, perhaps he did not listen to his own internal cues or did not advocate for himself the way that the process requires. For whatever the reason Heyer feels he make the mistake — it would be a step back at least 50 years in time to embrace his theories and advice.

He does play nicely into the hands and hopeful narratives of the conservative family groups and religious right that are rising to make the transgender community the next target of oppression.

Invest in a book that is not a poorly written rant with disproven theories and hypothesis and solutions. Or, just go meet some transgender people who are living congruent lives of gender and sex and doing so in healthy, productive and often God-focused lives. This book is not an accurate view into the trans community — AT ALL.

An excellent read of a transwoman who is also Christian is available on Amazon  Transparently: Behind the Scenes of a Good Life